We have met Big Brother and he is us.

To jump right in this week let’s look at how quickly interest rates have fallen in Canada and US.

It surprises me that there has not been more commentary on the interest declines in the mainstream media.

First, a look at the Canadian 10 year bond yield. 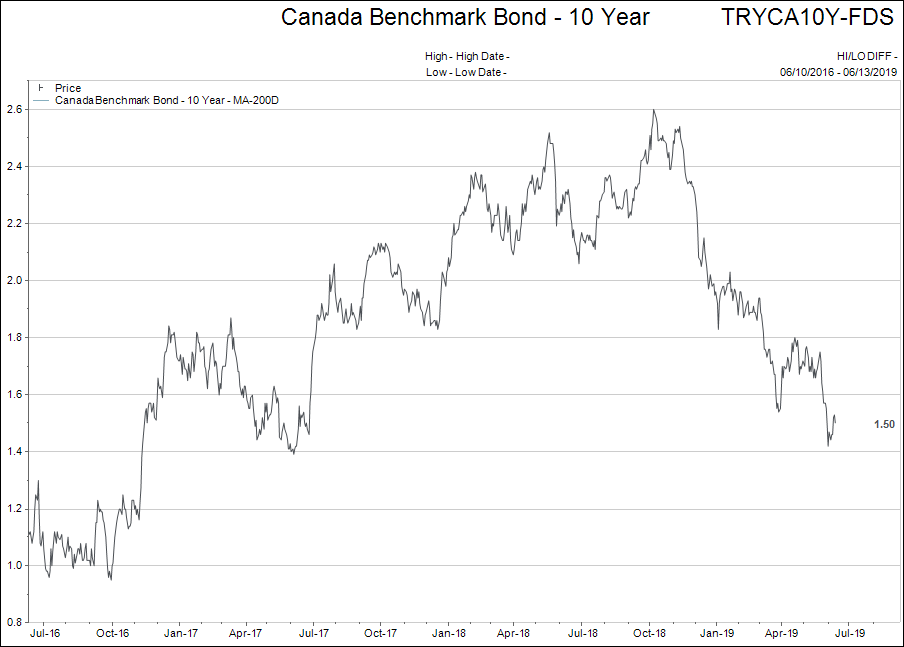 Same story for the US 10 year Treasury bond. 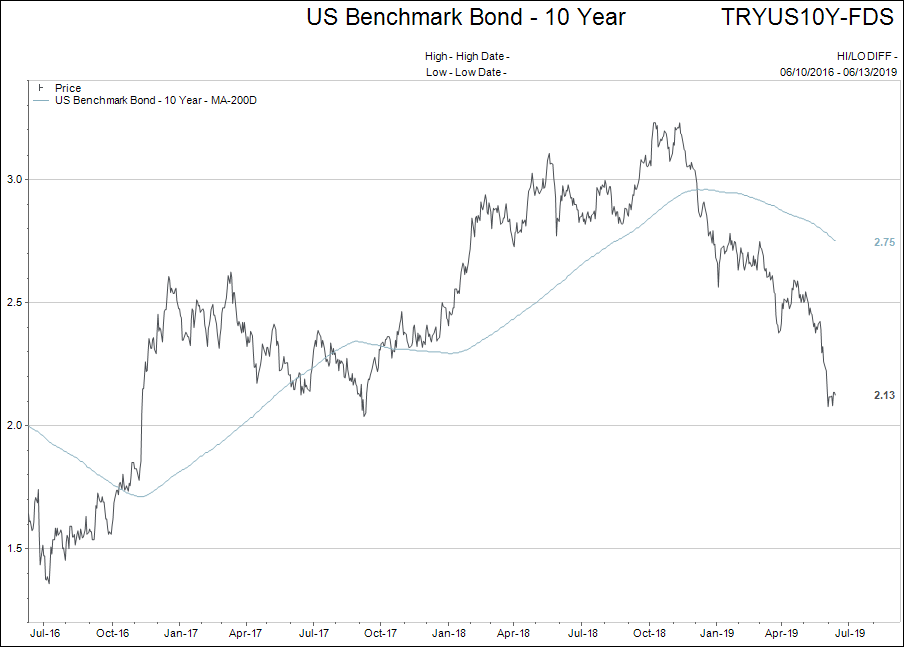 Below are the yield curves of Germany and Switzerland, although I’m not sure we can call them yield curves anymore since they are mostly negative yields! 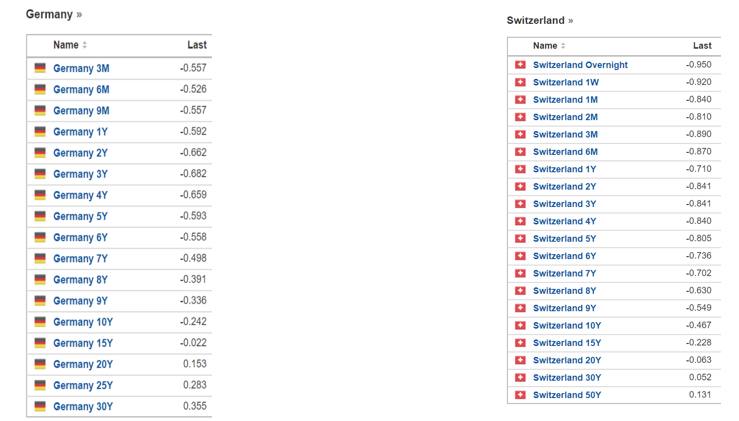 Notice that Germany has negative interest rates out 15 years and Switzerland is negative until 20 years. Even France is now negative out until 2028.

Below are the yield curves for China and Japan. Ten year interest rates in China were nearly 7% six months ago…and at 9% not long before that.

Japan, the original home of negative interest rates, has been negative for years…nothing changed there. 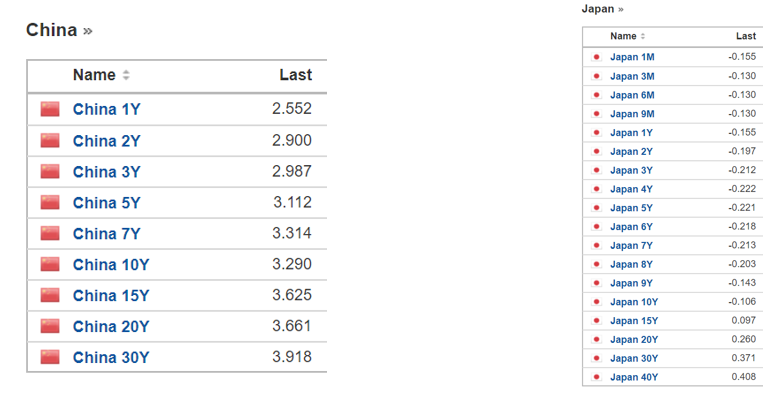 In total, there are more than $12 trillion US worth of negative yielding interest rates.

How these negative interest rates impact other asset classes is difficult to predict.

On one hand, it makes stocks and bonds more valuable as the “risk free rate of return” declines. Historically, the lower interest rates go, the higher stock values have always been.

But is that always a linear relationship?

Ben Hunt, of Epsilon Theory, makes an interesting point. Clearly, negative interest rates in Japan and Europe did not keep pushing stocks and real estate prices higher in those nations.

The chart below shows the density of water versus temperature. Notice what is a near perfect linear relationship of water getting denser as it cools becomes extremely “nonlinear” at about 4 degrees Celsius. 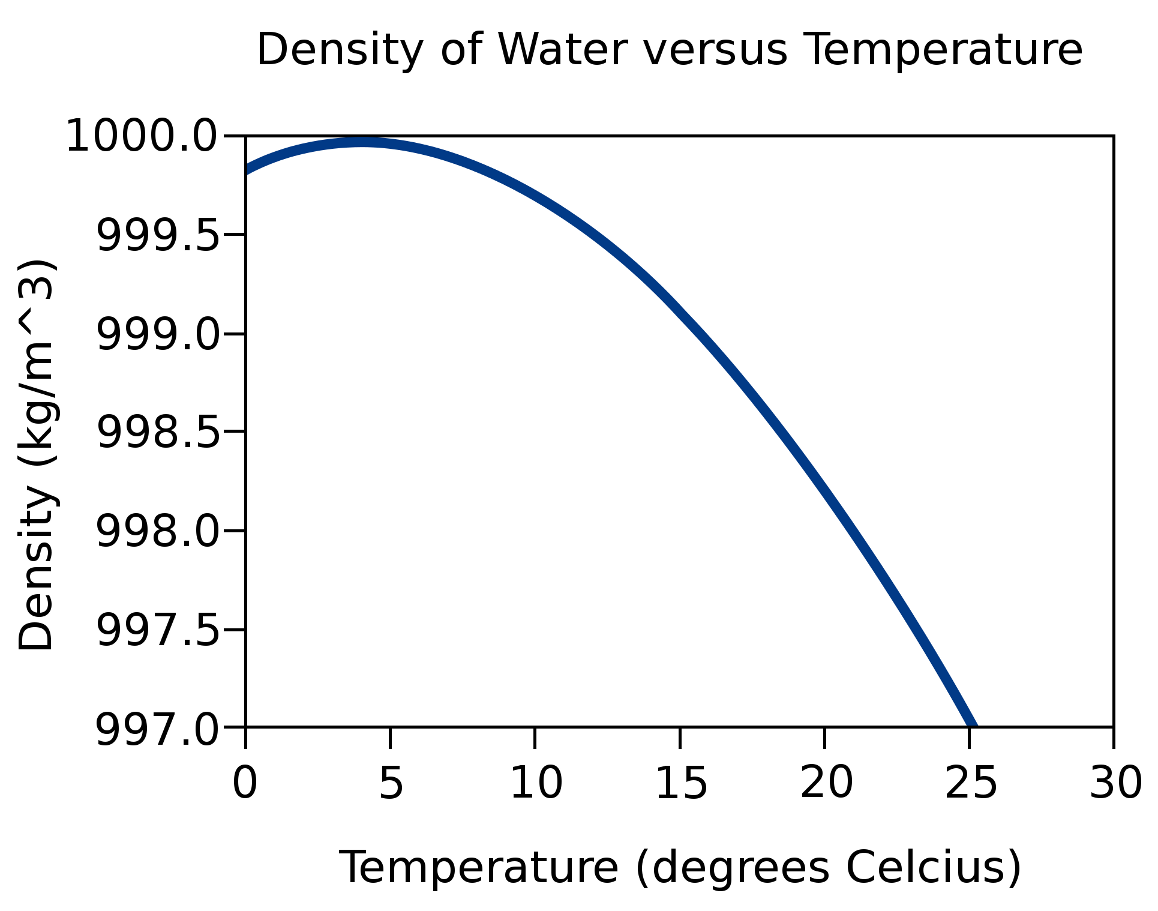 As Ben Hunt points out in the above mentioned editorial, the relationship just doesn’t work anymore at sub-four degree temperatures.

I’m not saying this is for sure true, I’m just asking the question.

But we for sure know that central bankers are NOT asking the question; they are definitely assuming the relationship stays linear.

I will follow up on these thoughts in future letters. For today, we will simply say we are watching the asset price vs. lower interest rate relationship closely.

The US Is No Longer Funded By Foreign Investors

The following chart is really important. It will absolutely matter at some point in the future. But for now, it has little impact on our investment themes. 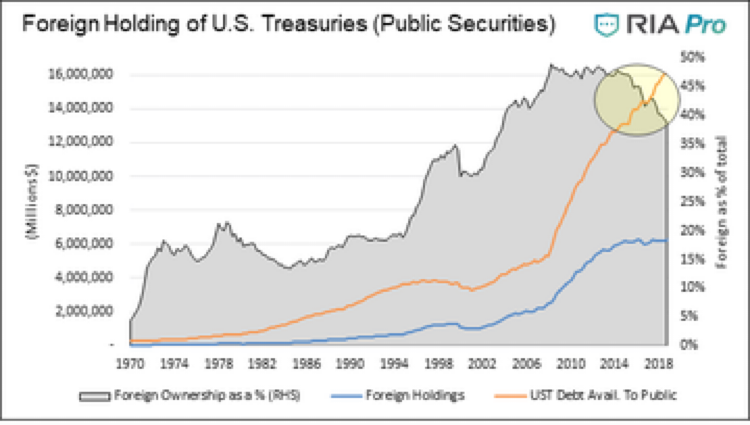 Spend a couple moments thinking about the three data points plotted. The most widely commented data point is the blue line showing how foreign investors are no longer pouring money into US Treasury bonds.

The most important part of the graphic to understand is that, even though foreign Treasury bond buying has just leveled off, the overall percentage foreign ownership of US Treasury bonds is declining as a percentage of outstanding bonds.

If QE4 and Modern Monetary Theory (MMT) are going to be part of our future then the US will have to print a lot more debt. Who is going to buy it all?

So far, it has been funded by the US internally. It will be interesting to see how these trends continue into the future.

Big Brother is Us?

Have you ever had that feeling that your smartphone or smart TV is listening to your conversations?

You know, you have been sitting around talking with somebody and the next time you go online you start getting advertisements enticing you to click on a link selling you the product or service you were talking about.

Privacy issues surrounding technology, both in terms of data collection and surveillance, are woefully lagging behind the rate of change in the online world.

What is really frightening though, is how much of our privacy we have willingly given away!

An article written in “The Atlantic” by Dorian Lynskey Doubleday, Doublethink is Stronger than Orwell Imagined, references the life envisioned in Orwell’s 1984 included the following quote.

“We pass our days under the nonstop surveillance of a telescreen that we bought at the Apple Store, carry with us everywhere, and tell everything to, without any coercion by the state.

The Ministry of Truth is Facebook, Google, and cable news.

We have met Big Brother and he is us.”

Why do I bring this up in a weekly comment? Two reasons:

It is best to keep an eye on the headlines for news that points towards political pressure to act upon the companies that sell our data.

You are a young person with a discipline to save, how long and at what interest rate would it take you to save $1,000,000?

The point of sharing this is not to discourage anyone from saving.

Hopefully, it encourages you to save more and be careful with your spending habits.

The past 20 years have seen asset price inflation that is so out of context to history that people fail to grasp the math behind savings strategies.

Financial diligence is always worth the sacrifice in the long run!

As always, please share your feedback and if you would like to discuss any of the topics covered (or others), don't hesitate to shoot me an email, or call.