The snow was really beautiful for about three days, now…not so much!

One positive side effect to the snow drifts has been my ability to catch so many of you at home.

Your comments about the content from the recent Modern Monetary Theory (MMT) trilogy of weekly comments were excellent. Your appreciation of the research efforts required to pull these thoughts together was humbling and makes my work that much more satisfying. Thank you.

Here were two thoughts that almost all of you spoke to in our conversations:

My beliefs mirror the sentiments in these two points, but here is the key to understanding where the world stands today.

Don’t think anyone would really argue any different than what is stated above, and now, the central banks have gone right back to their old tricks again.

It looks as though they may be gearing up for going even further down the rabbit hole of monetary manipulation this time, as the global economy is still weakening while I write.

MMT, Quantitative Easing, Negative Interest Rates…are all coming back with a vengeance!

Therefore, it is time to be BULLISH…with a game plan to adjust if the financial markets don’t respond the same way they have in the past 10 years, when the central banks try to influence them. 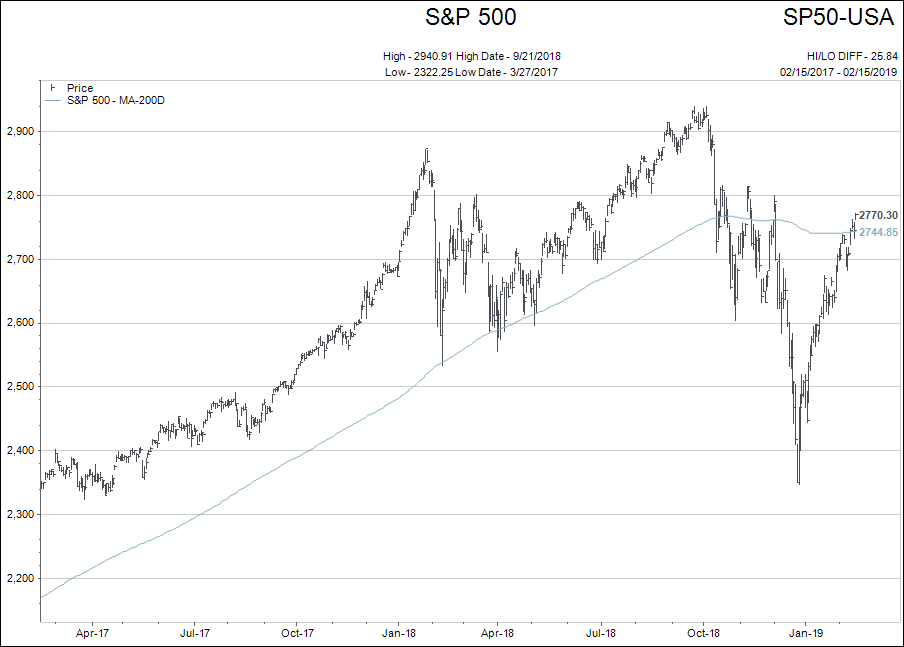 You can see where the consistent run up in the stock market ended in early 2018, and the S&P 500 got rather “choppy” for the next nine months. Then in mid-November the stock market began to dive sharply.

Because the global economy was slowing quickly while the expectation was for the central banks to keep raising interest rates and tightening lending conditions.

Within six days in early 2019 however, the Chinese central bank, European central bank and the US Federal Reserve bank all made 180 degree turns from raising interest rates and tightening monetary policy, to money printing and a full stop on interest rate increases.

Using the TEAM model basic structure, once markets eclipse the designated moving average in either direction, the model adopts the opposite market outlook.

In the case above, TEAM moved from BEARISH to BULLISH when the blue line was crossed from below to above. Important to note here, that the TEAM model does not use the S&P 500 index specifically. It uses a matrix of indexes, but the S&P 500 chart makes the point.

It is funny how it feels like the stock market has been running higher so quickly, but—in reality—it is only back to the same level it traded at in late November 2018.

That should make you realize both, how steep the Q4 2018 decline was, and how relentless the recovery rally has been, as the stock market senses it has the blessing of global monetary policy once again.

In summary, the world has ended its “financial normalization” quest and has re-entered the central bank controlled “fake-market world.”

That is enough said for this week.

If you would like to meet with me or talk about any of the topics discussed in the previous comments, give us a call or shoot us an email.