What is the point of writing an “Outlook” letter if nobody knows what is going to happen?

It is a fair question.

The reason I make a forecast is to create a “template” that I can weigh actual economic and market events against.

What is the old expression? If you don’t have any goals you will never achieve any goals.

Publishing an Outlook forces me to stay rigorous in my research, yet flexible in my opinions. Both of these attributes have helped me navigate financial markets over the years.

The year end summary offers a brief look at what happened in the past year.

The January to April Outlook is a concise set of expectations we can use to try and navigate in the coming year.

As with a ship at sea, if we have been travelling for some time and we come to the place we think we should be and the navigation aids that are supposed to be at that spot are not there…well, we better check back on where we just travelled.

Please don’t use this, or any other forecast, as a prophecy. Nobody knows what is going to happen.

There were not a lot of bright spots for investors in 2018. Since the year is not over at the time of writing this synopsis it does not include official returns.

Real Estate prices finally went year-over-year negative in November 2018 in BC. Vancouver was down about 8% from a year earlier and 14% from the high points reached in early 2016. The Vancouver Island market is more or less “flat” in prices from a year ago and down slightly from all-time highs.

Stock markets were not great performers either.

Below is a graphic showing 2018 trend lines for both Canadian and US large capitalized companies:

Just for interest, let’s take a look at a unique graphic that is not shown often in the media.  What this next chart is showing is what an investors rate of return was like if they bought different global stock markets in 2008, BEFORE the “great financial crisis” had hit.

Hmmm…one of these markets seems out of sync with the others?

Bond market rates of return were also down for 2018 if you had a laddered bond portfolio.  Not by much…but still negative.

Ironically, 2018 will go down in history as the year where 93% of all asset classes had a negative rate or return.  That is the highest ratio in history.

As we turn the page on the calendar, let’s take the perspective that many of these markets are now better value to be bought by long term investors and we will seek out opportunities to make purchases in 2019.

What were the big differences between 2018 and the previous number of years?

There are many things that one could list here, but I am going to focus on only two.

These two differences are the cause and not the symptom for the disruptions faced in financial markets throughout the final quarter of 2018.

How 2019 plays out depends upon how the following two financial initiatives progress.

As a side note, the ECB (blue) is scheduled to stop adding to its balance sheet as of December 2018, and start QT in June 2019.

Ok Nick…what about the “trade wars” and “political unrest” and “the Italian banks” and “Brexit” and….

All of those things move markets and should be watched, but my thesis has always been that the BULL market which was launched with the first Troubled Asset Relief Program (TARP) in 2009—followed by QE2, “Operation Twist”, and QE3—was based on monetary policy, not economics and world events. Japan was printing money at an astonishing rate during those years and, finally, the European Central Bank (ECB) started QE and took it to levels the Americans have only dreamed about…so far.

These massive amounts of printed money and manipulated interest rates more than anything else created the liquidity for global asset prices to go higher.

Therefore, the end of the era of printed money would logically impact financial markets in the opposite direction.

One more time, I would like to quote from the editorial we published in early September 2018 (“September to December”) speaking to exactly what my expectations were at that time:

Presently, we are at the end of December and a significant amount of the list above has happened. The stock markets are in the process of correcting. The decline is not large enough to move the US Fed back to QE, but it has definitely cooled down the talk of multiple interest rate increases in 2019.

The clear question for my analysis going into 2019 is simply: Does the present slowdown in economic data continue creating a recession or does the economy gain traction again?

The answer to that question simply cannot be known at this moment.

Below is a chart which paints a picture that makes one think a recession is a reasonable expectation at this point, but the jury is still in deliberation. 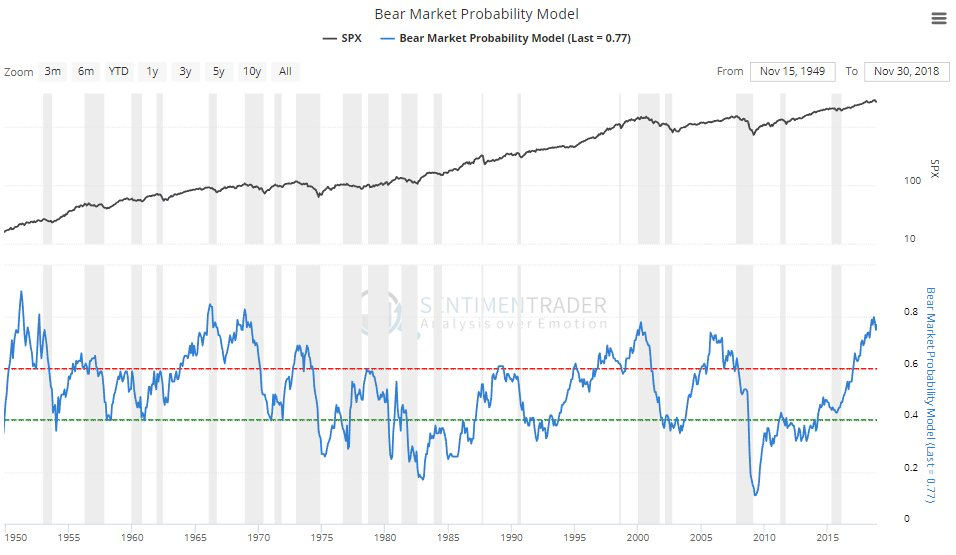 This chart shows a logarithmic graph of the S&P 500 on the top section, and “Sentiment Traders” BEAR market probability model in blue on the bottom. What is interesting about this chart is that it shows “BEAR Markets” and “recognized recessions” in the grey shadows.

Notice how often the blue line has peaked at a high level, then started down at the beginning of a BEAR market or recession. Since 1950, the two times this was NOT the case were 1952 and 2006. Remember, the grey lines are added in a year after the blue line is plotted once a recession can be determined by past economic growth data.

This brings me to the key to understanding how BEAR markets “behave.”  If we better understand what typical behavior in a BEAR market is we will have a better chance of identifying:

Below is a graphic showing the BEAR market declines of the last 100 years.

The dark red line represents the present decline of US stocks.

If we are in a BEAR market, then this decline is still in its infancy. This does not mean it has to decline a lot more, but it does mean that it will require another three to six months to find its eventual bottom.

The stock markets should now be ready to rip higher and lower on given days.

Commentators will boldly prognosticate both “the bottom and great buying opportunity” and “the end of the financial world as we know it”…often both comments made by the same person during the same week.

Please remember, this is normal stuff that happens in BEAR markets.

Be aware of both the “percent decline” and “duration” components of BEAR markets.  During a correction I work specifically with technical levels and charts to try to find entry points that offer good relative value.  Time is not important.

But BEAR markets are defined by both percent decline and duration, so we need to watch both variables.

Below is a chart I posted on December 3, in the weekly comment. The TSX was still range bound at that time and the jury was still out as to if this was a “correction” or BEAR market.

The TSX had formed a “double bottom” where a sharp spike down was retested after a rally higher, and there was hope of the US Federal Reserve Chairman backing away from his promise to raise interest rates by three or four more notches. 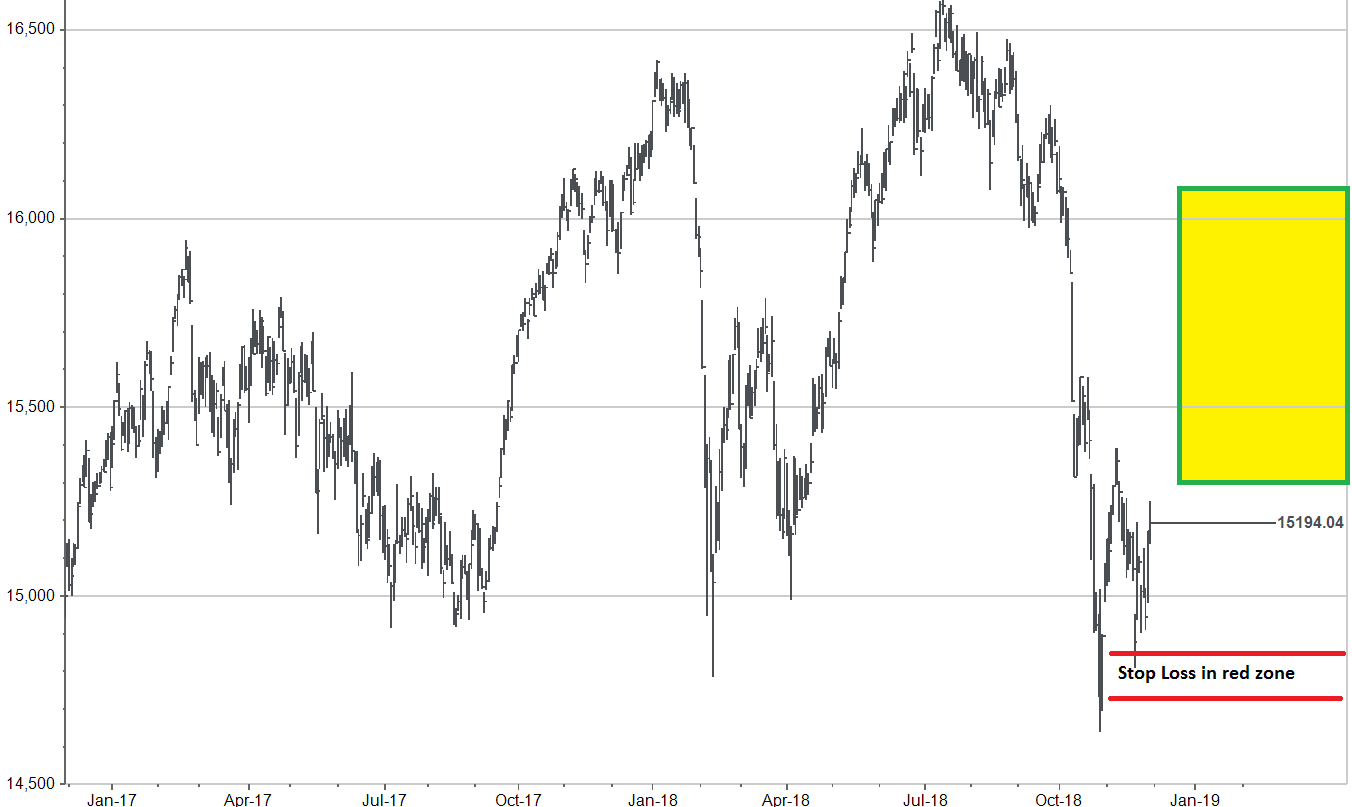 The set up at the time is pictured in the chart above.

Unfortunately for the BULLS, the Fed did not bow to market volatility as expected and, along with some really strange Presidential Tweets, the TSX index in Canada took another sharp run lower.

The next chart replicates the image shown above and adds my (hopeful) expectation for early next year. Stock markets have endured enough short term pain and should try to build a base again in the beige box shown in the chart. 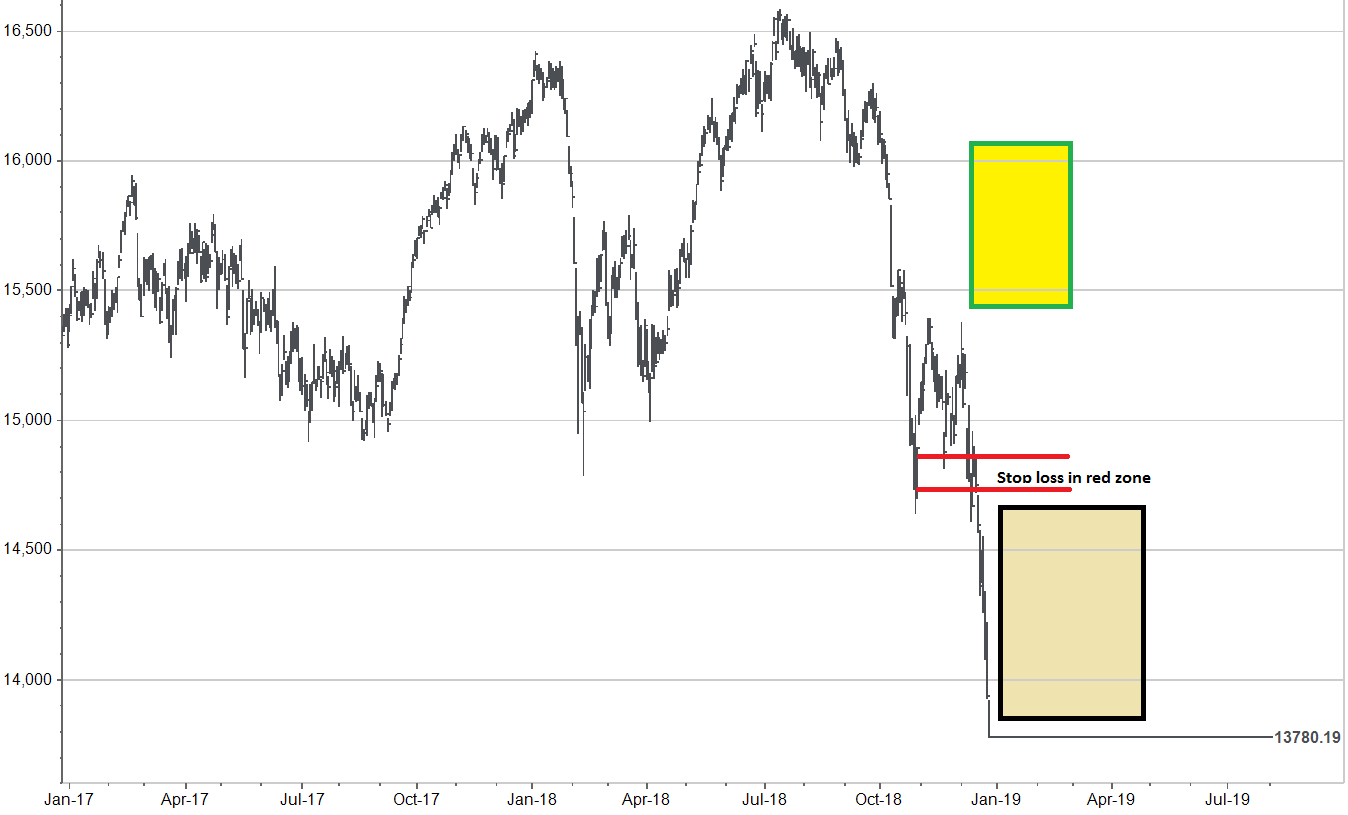 What I want to leave you with is a few simple summary statements:

The stock market has fallen enough already to create some long term opportunities.  Monthly yields of more than 6% are available. However, markets have in no way, shape, or form given any signal they have made a bottom.

There are some investors who have been “waiting for cheaper stock prices and consider 6%, or better, a yield that they can hold for the long term and endure a significant amount of stock market volatility as long as the money keeps coming in.”

If that sounds like you, then it is a good time to start deploying portions of your cash into dividend paying investments that are unlikely to cut their dividends during a recession.

There are other investors who “are more loss conscious and want to wait for the stock markets/economy to show some positive signs before venturing into new investments.”

Fair enough, this is not the time for these investors to invest new capital.

Let me outline what is a typical “double bottom formation,” which would give more loss conscious investors comfort in adding money to the financial markets. 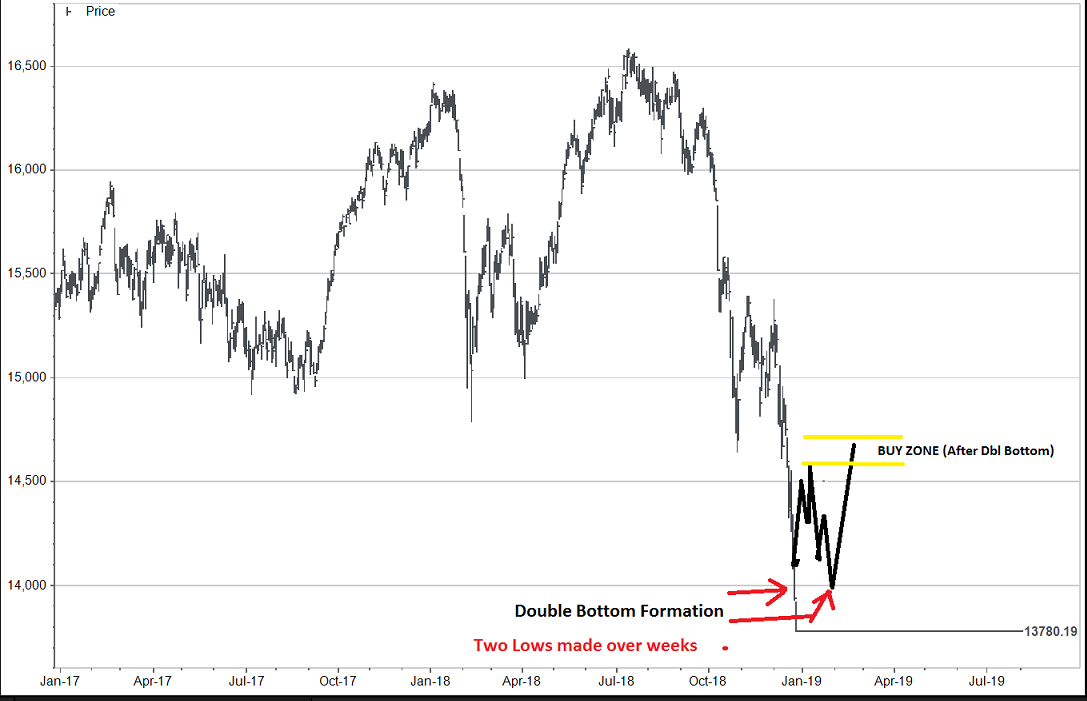 Notice, this formation is similar to what I was trying to anticipate back on December 3rd.  The same rules would apply to this chart formation as did back in early December. If the stock market were to make a double bottom and rise above its consolidation formation into the BUY ZONE we would add.

But if the bottom was broken by another decline a stop loss would be triggered once again, as it was in early December.

So there you have it.

I think it is safe to say that from late September to the New Year, the financial markets have progressed past “correction” on to “BEAR market.” The question remains whether this is a “garden variety” BEAR market or something more. Nobody knows quite yet.

One has to be patient and let the markets work out their path forward.

Due to the significantly greater volatility I will keep the time frame of the forward look shorter than the usual four month window I like to use.

Let’s see if stocks can hold above their December 24th lows. If they do hold, let’s see if they attempt a “retest of the lows” at a slightly higher level.

Be patient and watch. There is no rush to try and catch the very bottom when markets get this volatile.