The paragraph below is taken from the Financial Post, November 21st, edition and is quoting Bank of Canada Chair, Stephen Poloz:

The Bank of Canada will use three criteria to assess alternatives to inflation targeting to guide monetary policy:

The reason for these changes is to try and arm the Bank of Canada with better tools to combat the next recession and stop households from taking on further excessive financial risks.

Now you may stop me here and ask…Isn’t that what you have been hoping the global central banks would do for years?

Yes, that is absolutely what I had hoped they would do…about 5 years ago!

I believe the Bank of Canada is being “errorgant” by making these statements.

This is different than arrogant.

Central banks decided to utilize their power to inject the global financial system with copious amounts of money and manipulate interest rates lower. In turn, this elicited a desired response from the “sheeple” who were only too happy to ramp up deficits by over-spending.

Central banks had the skill set and ability to influence or “nudge” people’s behavior in this way.

For the central banks to believe they have the power to reverse the process in an orderly manner using the criteria outlined at the top of this editorial however, is pure “errorgance.”

Because the central bank has neither the TOOLS nor the CONTROLS to put the inflation/spending genie back in the bottle without causing collateral dislocations in the economy.  An analogy would be someone trying to build a fire out of wet wood by continually adding gas to the sputtering flame.  Once the fire gets raging, simply choosing to stop adding gas is not going to put the fire out.

We are already seeing the negative impact of trying to reverse the years of central bank manipulation on asset prices and the process has hardly started.

Real estate and stock markets are having “second thoughts” about their long term uptrends. Investors are faced with a number of short term fixed income opportunities that begging for some attention now that they have “3% handles” on them.

It will be interesting to watch and see exactly what actions the Bank of Canada comes up with to accomplish their new worldview of inflation targeting alternatives. It will not be as easy as the three steps listed at the beginning of the editorial make it out to be.

The case I am going to build below is not a consensus forecast; I am not even saying that it is a probable forecast.

My goal is to get you thinking about past recessions relative to what we are witnessing today in Canada.

Let’s list what is happening right now in Canada:

With all of these things happening at the same time, does it mean Canada will fall into recession?

What prompts me to bring up the idea of a Canadian recession is what is happening around the world at the same time as the slowdown we see in Canada.  If it were only Canada, we could probably skate through this slowdown, but what we are witnessing is a global ratcheting down of growth. 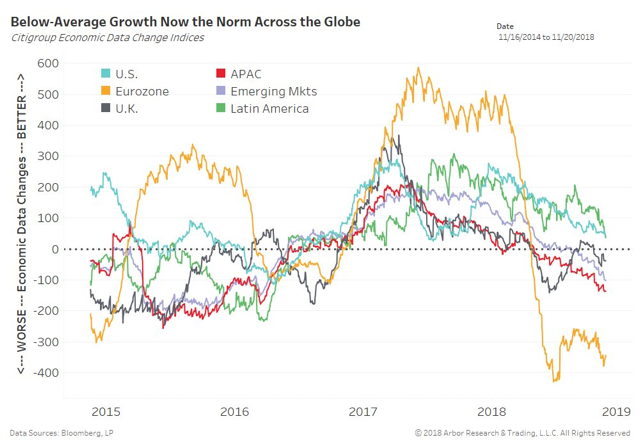 Note: These number are right up to date.

The key idea I want to stress here is that the downturn in growth coincides perfectly with the end of the Quantitative Easing era when it comes to global monetary policy.

In other words, the entire world is a huge “free money junkie” that can’t shake its addiction to QE and manipulated interest rates.

So, why don’t the central banks go back to QE?

Oh, they will…But only when there is enough pain in the asset markets for them to get nervous.

The reason it will take that long is because the choice to go back to QE from these low interest rates will confirm with them they are in the “Financial Hotel California” where “you can check out any time you like but you can never leave!”

Let me show you a chart created by Blackrock Investments using Federal Reserve data, which graphically illustrates what the “Financial Hotel California” looks like. 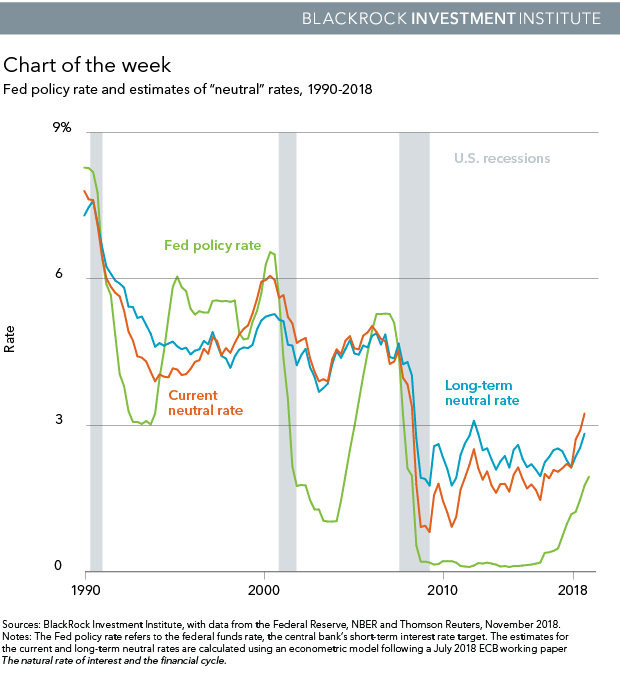 The “Fed policy rate” still has a long way to go to catch up to “current neutral.”

It is not tough to see the potential for an overshoot by the US Fed on interest rate increases.  Growth is slowing and the Fed is still raising rates.  Hey, they might have already done the overshoot?

Conclusion: Canada escaped relatively unscathed in the last recession. That is not likely going to happen again.

As I have stated before in these pages, the US and Canada will likely exchange positions of relative pain in the next recession when it hits.

Are we in recession yet?  Definitely not in the US, but Canada may be edging closer than many think, given the huge drop in oil prices and the cooling in real estate.

If we started a recession in Canada in the fourth quarter of 2018, it will not be until Q3 of 2019 that StatsCan tells us that it happened.  By that time it will be mostly over.

Now is the time to consider changes to investments that are impacted negatively by economic slowdown….not when StatsCan tells you about it.

Client Note:  All “tactical” and TEAM positions are in cash now.

It is getting to that time of year again.

Megan and I are creating preliminary capital gain/loss packages for TAXABLE accounts at your request.

These packages will give you a year-to-date view of your capital gains and losses in case you would like to do some year-end tax planning.

Please give us a call if you would like one of these done for your non-registered account.  We can send it to you by PASSWORD PROTECTED email if you like.  When you call in requesting a package, we will give you your personal password.