TEAM Models: What’s the Difference Between Them?

Quite a few people asked me to refresh their memory as to what the differences are between the Tactical Equity Allocation Model (TEAM) and the “Fast TEAM Model” last week.

As volatility ramps up, it is a good time to review exactly what the distinctions of each strategy are.

The main distinctions between TEAM and FAST TEAM are:

Let’s drill a little deeper into what these differences translate into in terms of investment mix.

The triggers are 100% written in stone for the TEAM Model.  The diagram below summarized exactly how the TEAM model makes its asset mix changes and when those changes were executed since 2012.

Please note, that TEAM would go to 100% cash if the TSX closes below approximately 15,170 at the end of the month of October.

The FAST TEAM is a more “subjective” portfolio.  Yes, it includes the same “rules based” disciplines on the same time horizon the regular TEAM employs.  But FAST TEAM is much more flexible in terms of short term trading opportunities.

Let me use the last month to show you what happened in both TEAM and FAST TEAM models.

FAST TEAM – went from 100% Canadian dividend stocks to cash as the TSX index fell to 15,770 in early October. Then bought 100% back into Canadian dividend stocks last week at TSX 15,420.  At the same time purchases were made, FAST TEAM employed a 1% “stop loss” as risk control. The trigger was an attempt to buy the short term bottom that has worked consistently the past 10 years. (Shown in the chart below).

The hope was that last week would have seen the green line at 15,650 taken out and a move to the 15,705 offering a new level of support.

Unfortunately, the bottom never held and the ETF was “stopped” out with a 1% loss.

It is very important to understand the difference.  The FAST TEAM was looking at short term trends trying to capitalize on the “buying the dip” chart pattern.  But when the short term bottom that was being hoped for does not materialize, the FAST TEAM does not allow for the position to go down very much without exiting.

The regular TEAM model, with its longer time frame, will make its adjustment (if required) at the end of the month. As said above, if the TSX does not recover back to the 15,170 level, it will also go to 100% cash.

Hopefully, that clears up the confusion and defines the difference between TEAM and FAST TEAM.

If you have any questions please feel free to contact me.

Wow, I didn’t see that one coming.

Oh, I was pretty sure that the Bank of Canada (BOC) would raise interest rates by 0.25% to 1.75%, but what I didn’t see coming was the “hawkish” tone of the statement where the BOC removed the term “gradual increases” and spoke to needing “the policy interest rate to rise to a neutral stance to achieve the inflation target.”

Just for the record, the BOC estimates that a “neutral stance” is estimated to be somewhere between 2.5% and 3.5%.  This means the BOC has to raise rates three more times to meet the bottom end of that target.

A little of both I suppose?

The next section of the editorial finds me reconsidering the guiding outlook I have had for financial markets for the past 18 months.  I am seeing a significant change in the attitudes of central bankers in both Canada and the US...Europe, not so much.

President Trump, once again called out the US Federal Reserve on their tenacity to keep lifting interest rates.

This time he made the comment in terms of how Obama enjoyed zero percent interest rates for his term in office…Trump basically asked, “Why the Fed can’t cut him some slack?”

I thought the Twitter thread below answered this question nicely:

Samuel Katchen – The Fed may go (raise interest rates) again in December, but I think they are in “over-kill” mode from there.

Mark Yusko – Great perspective, but we believe the Fed is committed to “normalize” interest rates (probably 3.5% - 4%) so the gun is loaded to fight the next recession.  Necessary to cleanse the system.

Douglas Kass – Agree, from my perch, the policy mistake was keeping interest rate so low for so long of period.

Michael Lebowitz – QE2&3 were not good ideas either.  They were the “over-kill.”

President Trump has a valid reason to say what he is saying.

If it was OK to keep the economic crack cocaine pouring into the economy for the 10 previous years why does it need to stop now?

The conversation above shows, the interest rate increases are not targeted at Trump, but that they are the steps being taken to undo the mismanagement of global economy by Greenspan, Bernanke, and Yellen.

Fed Chair Jerome Powell seems to be a different person than his predecessors.  Time will tell.

I wanted to add this short section to the end of the weekly because it forces me to re-examine a position that I have hung onto very tightly.  It has been my position that the Fed will keep raising interest rates until something “breaks” in the economy and then go right back to the old toolbox of Quantitative Easing and money printing.

We are getting closer to that point. Check out the chart below. It shows the US homebuilders index, auto and parts companies, and banks stock performance. 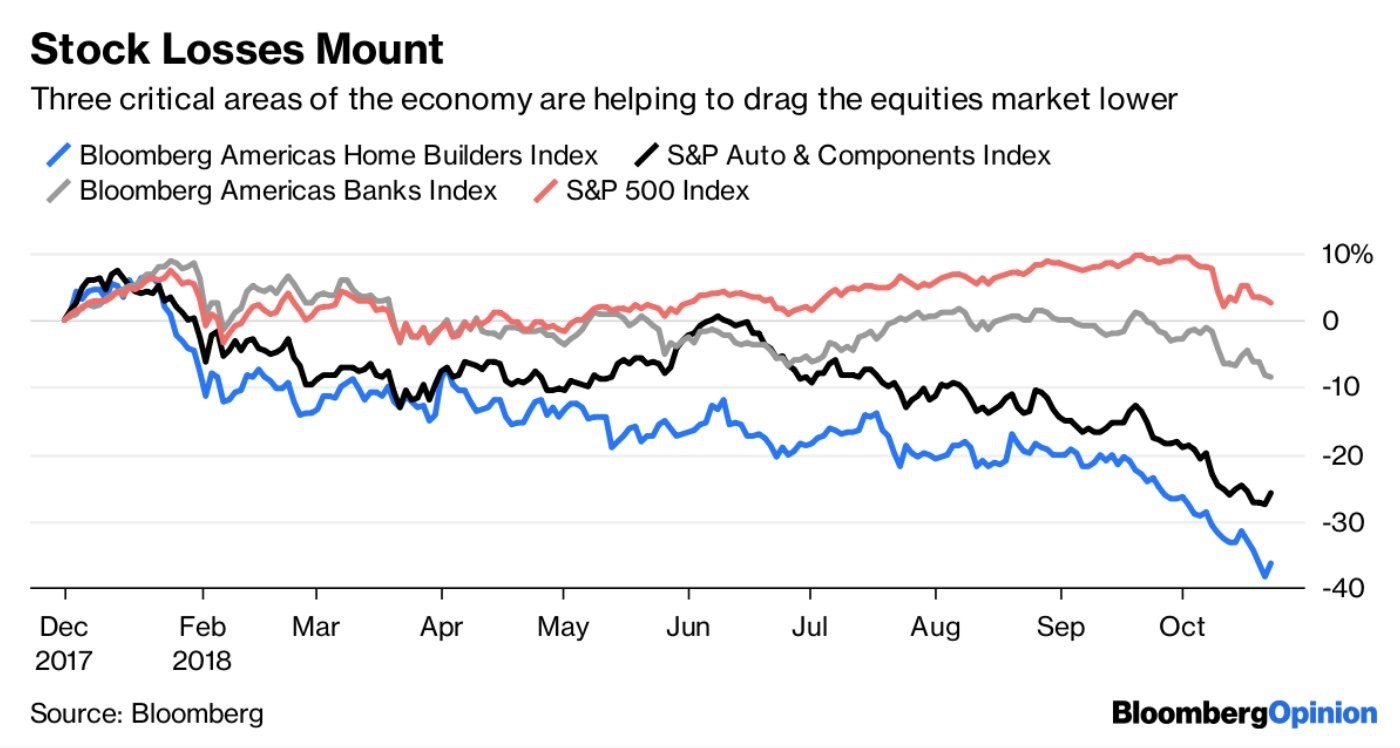 Not exactly a BULL market…

I still believe a “Fed panic” to be the most likely outcome. But what if Fed Chair Powell is the “real deal” and wants to rectify forty years of flawed central bank policy?

Simply stated, I am more open to the idea of a Fed that may wait longer to bail out the financial system again during the next recession.

Bottom line: If the FED or Bank of Canada remain focused on ignoring weak asset markets and continuing to raise interest rates, investors will have a change of heart as to the level of courage they presently muster in the face of “buying the dip” in stocks and real estate.

It is important to consider the possibility of a lack of central bank “panic” given the statements both Stephen Poloz (BOC) and Jerome Powell (US Fed) in the month of October.