They livin' it up at the Hotel California

Welcome to the “monetary Hotel California”

Last week was a time of reflection for me.

The weather change was sudden and I felt a little like “cocooning.”  A number of close friends had some life changing family situations occur that rattled my thoughts, and I am still amazed at how many conversations clients and acquaintances have with me speaking about a general uneasy feeling they have about what is going on around them.

During the week I decided to listen to some old favourite music albums…cover to cover…they really were ahead of their time.

The lyrics from Pink Floyd, The Wall and Dark Side of the Moon are both amazing.  Then I listened to The Eagles, Hotel California, and this entire weekly came together in my mind.

Below are the lyrics, first to the chorus, and then the last two verses of Hotel California:

Mirrors on the ceiling,
The pink champagne on ice
And she said, 'we are all just prisoners here, of our own device'
And in the master's chambers,
They gathered for the feast
They stab it with their steely knives,
But they just can't kill the beast

Last thing I remember, I was
Running for the door
I had to find the passage back to the place I was before
'Relax' said the night man,
'We are programmed to receive.
You can check out any time you like,
But you can never leave!'

It is a perfect description of our financial present.

We live in a world where the monetarily narrative is that nothing bad will ever happen again.  It really is “such a lovely place,” and the wealthy are truly “livin’ it up in the monetary Hotel California.”

At the same time, those livin’ it up are suspicious that “we are (might be) prisoners here, of our own device” and there is a dark underbelly assigned to many once the world checked into the “monetary Hotel California.”

And the chilling final lyrics that say to any who might change their minds about this idyllic Hotel California; Last thing I remember, I was running for the door.  I had to find the passage back to the place I was before. Relax said the night man, we are programmed to receive.  You can check out any time you like but you can never leave.

Let me show you one chart that summarizes the difficulties in leaving the “monetary Hotel California.”  Courtesy of Michael Lebowitz, from 720Global.com. 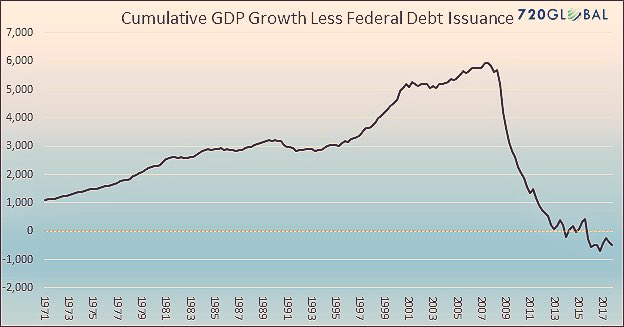 Let’s consider what it is showing:

Here are two follow up questions I asked myself.  Where does all this debt come from?  Who holds it all?

This gets even more interesting and is one of the reasons I hang on to the idea of the global central banks going back to their old bag of tricks during the next economic downturn and printing copious amounts more money.

This first snapshot shows US national debt in a light blue box at $10.6 trillion in 2008.   That is a really big number.  But what I want to focus on is how these debt numbers change relative to each other.

Inside the blue box I have also highlighted where the US national debt is divided into the “per citizen” and “per taxpayer” categories.  You will see these ratios continue to grow out of control.

The US Federal Budget Deficit in the magenta box is also totally out of control given that we are now supposed to be in the best of times!

What doesn’t grow out of control is the personal debt ratios which are shown in the dark red box at the bottom.

Actually, citizens in the US have been adding debt at a significantly slower rate than before the “great recession.”

Here we begin to compare the boxes.

Here are a few clear conclusions from the data above.

1. The Federal Government finances are out of control on both a Debt and Deficit basis.

2. The US citizens and family have remained about static on a constant dollar basis in terms of both debt and savings.  Relative to inflation, US citizens are “less in debt today than 10 years ago” but also poorer since the amount of goods just under $5000 in savings buys in 2018 is lower than 2008.

3. Low interest rates allowed the US government to run much higher deficits.  This is demonstrated when we look at the “US Interest on Debt,” which is a lower total on $21 trillion in 2018 in debt than it was on $10 trillion in 2008.  But if interest rates continue higher, interest paid will explode to the upside.

Therefore, the “monetary Hotel California” is defined as the inability to let interest rates rise significantly again because the interest on the snowballing debt would create a massive budget deficit.  Obviously, this would negatively impact tax receipts too, as higher interest rates slowed economic activity.

Hence the line of the Eagles song applied to US finance: “You can check out any time you like, but you can never leave.”

The last snapshot shows a projection of the same US financial metrics in 2022.

So much could change between here and there…I show it for your interest.  The numbers are projected by rolling today’s conditions forward.

In conclusion, there are probably a number of different things these numbers will make you think about. If you would like to make a comment about your thoughts I would love to hear from you.

For me, the most obvious thing about the “monetary Hotel California” is how it highlights those without asset ownership are really stuck behind the 8-ball.

When a person, company, or country is deep in debt, and they cannot reverse their operating budget from deficit to surplus, they are forced to maintain adequate asset valuations to continue to borrow ever greater amounts.  In other words, they need the value of their “stuff” to keep going higher to try and fund their continued borrowing.

If you don’t own any stuff, you’re falling further and further behind.

Can this be done forever?  Of course not, but it can be done and has been done for a whole lot longer than I ever thought it could.

Welcome to the Hotel California!

Welcome to 2021, where a significant portion of society actually goes further into debt every single year.