Perceptions can change and when they do, valuations will matter

The following graphics were taken from the “Visual Capitalist” publication last week. I don’t follow this publication, but it is often retweeted and I thought you might find these two graphics informative.

Notice that in two months the present “post-crisis BULL run” will become the longest of all those bull markets listed.

It kind of amazes me when I hear people say we must be close to the beginning, rather than the end, of this BULL market when I see the graphic above.

The next graphic does a nice job of quantifying and chronicling the American Bull markets:

Let’s see what the future holds when it comes to the length of time left in the aged BULL from the March 2009 bottom.

The acronym stands for “Facebook, Amazon, Apple, Netflix, Google (Alphabet)” and these companies have represented an incredible change in the way life is lived in the modern world.

Wall Street is fascinated by which one of these companies will become the first company to be worth $1 trillion by market capitalization. 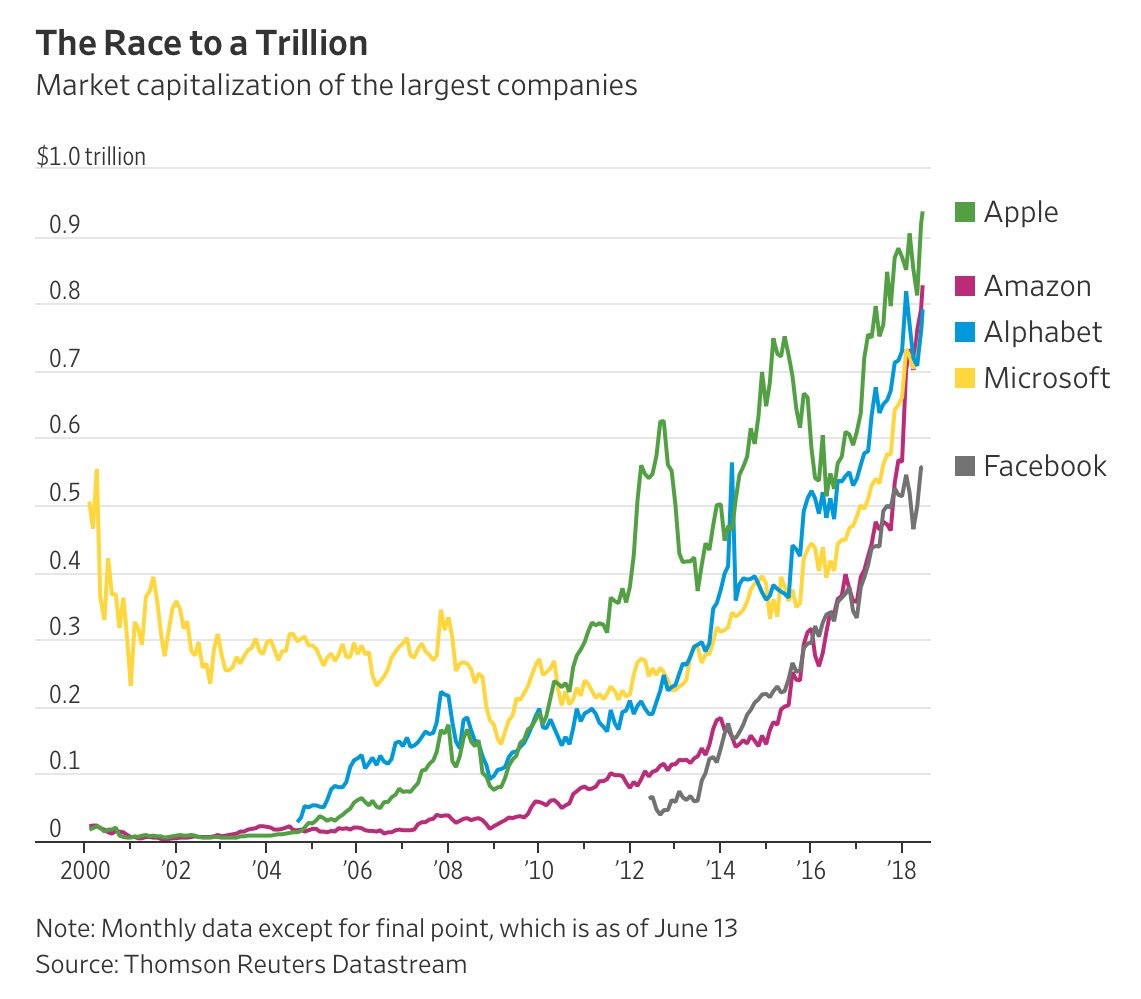 What is more interesting to me is to see how much of the US stock market performance has been based in these FAANG stocks “race to $1 trillion.” 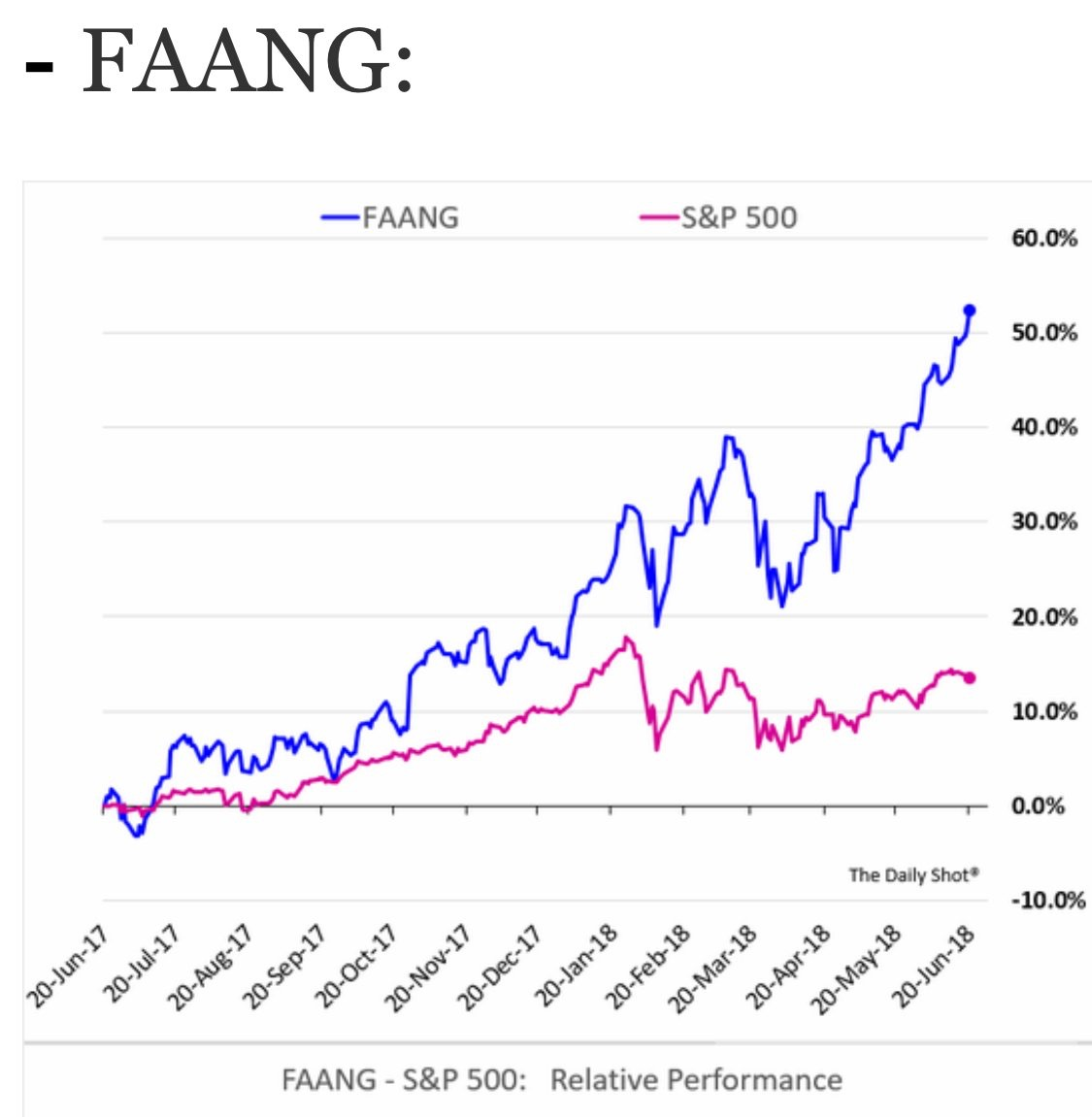 Now that type of outperformance is absolutely 1999ish in nature!

C’mon Nick, you’re not saying the FAANG stocks of today are like the “1999 FAANG” of Cisco, Microsoft, Intel, Oracle, and Nokia of 1999/2000 fame are you? Not necessarily, but let’s look at the comparison.

*PE ratio in 1999 was GAAP earnings and without significant buybacks.  2018 is using adjusted earnings and massive stock buybacks.

Let me include a few more statistics about FAANG stocks to grab your attention:

There is no easy way to compare the two generations of technology market leaders in terms of what they actually do, but it is easy to make the case that the world cannot exist without the FAANG stocks of today. I would argue the same could have been said of Microsoft, Oracle, Cisco, Intel and Nokia in 2000.

Maybe all the data the present tech leaders mine and sell is worth their present price tags? Or maybe not? History bares out that it is not the business models that get out of whack…it is what people pay to own those models that gets messed up.

My purpose for writing this little vignette is to make you aware.

These stocks are ridiculously expensive as stand-alone companies compared to historical valuations. It requires a “brave new world” data driven scenario to allow these companies to grow into their price tags.

That said, never underestimate the ability to grow a bubble higher!

Let me just throw one little change at you for an example of how fast this could change.

What if China said tonight that it would no longer supply Apple with all the components needed to build their phones and computers?

Wow, would that be a crazy thing?

Anyway, point being is that perceptions can change and when they do, valuations will matter.

Doug Short updates the following chart quarterly.  It is considered “Warren Buffett’s favourite chart relating to long term value for US stocks.” The components are listed in the top, left corner of the chart if you wish to understand how it is created. 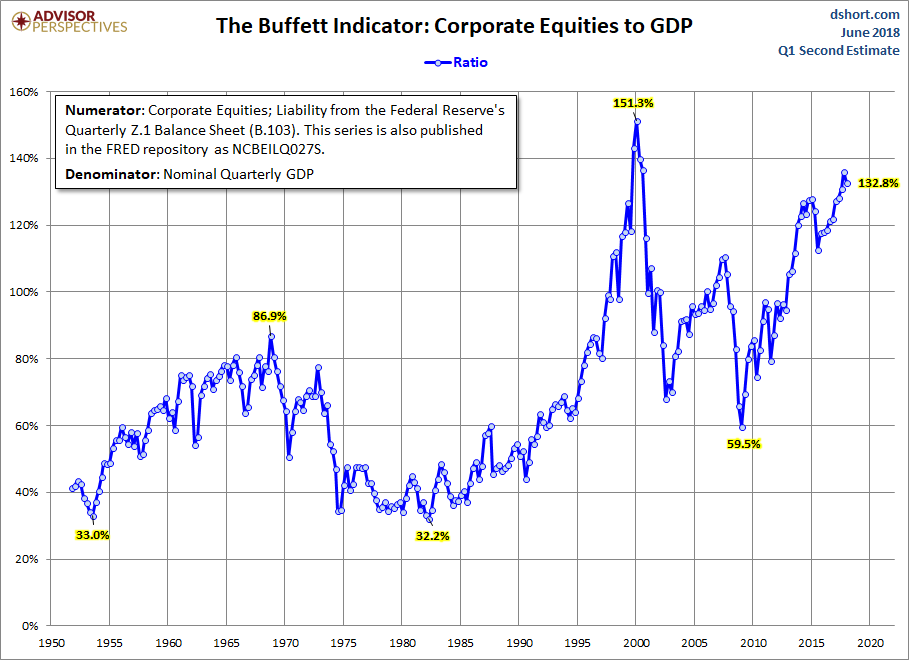 The next chart is a five year picture of the “smart money index” (SMI) in the US. The smart money index is created with the “belief” that smart money trades in the first and last hour of any given day. The formula used to create the chart is: 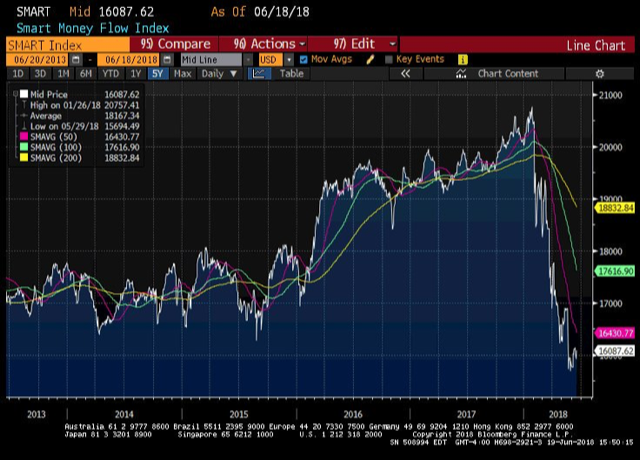 My comment is simply something changed at the start of 2018.

The next chart is from the Ned Davis group, and it shows how large of a percentage stocks make up of a household’s net worth (pension included). Again, this is making the point that we are near all-time extremes in this measurement of household asset mix.

The next chart changes gears a little bit.

The US has been an incredible job creator over the past 30 years, but how those jobs have been created has changed drastically. Check out the chart below to see how the job engines in the US have shifted up to larger and larger companies. 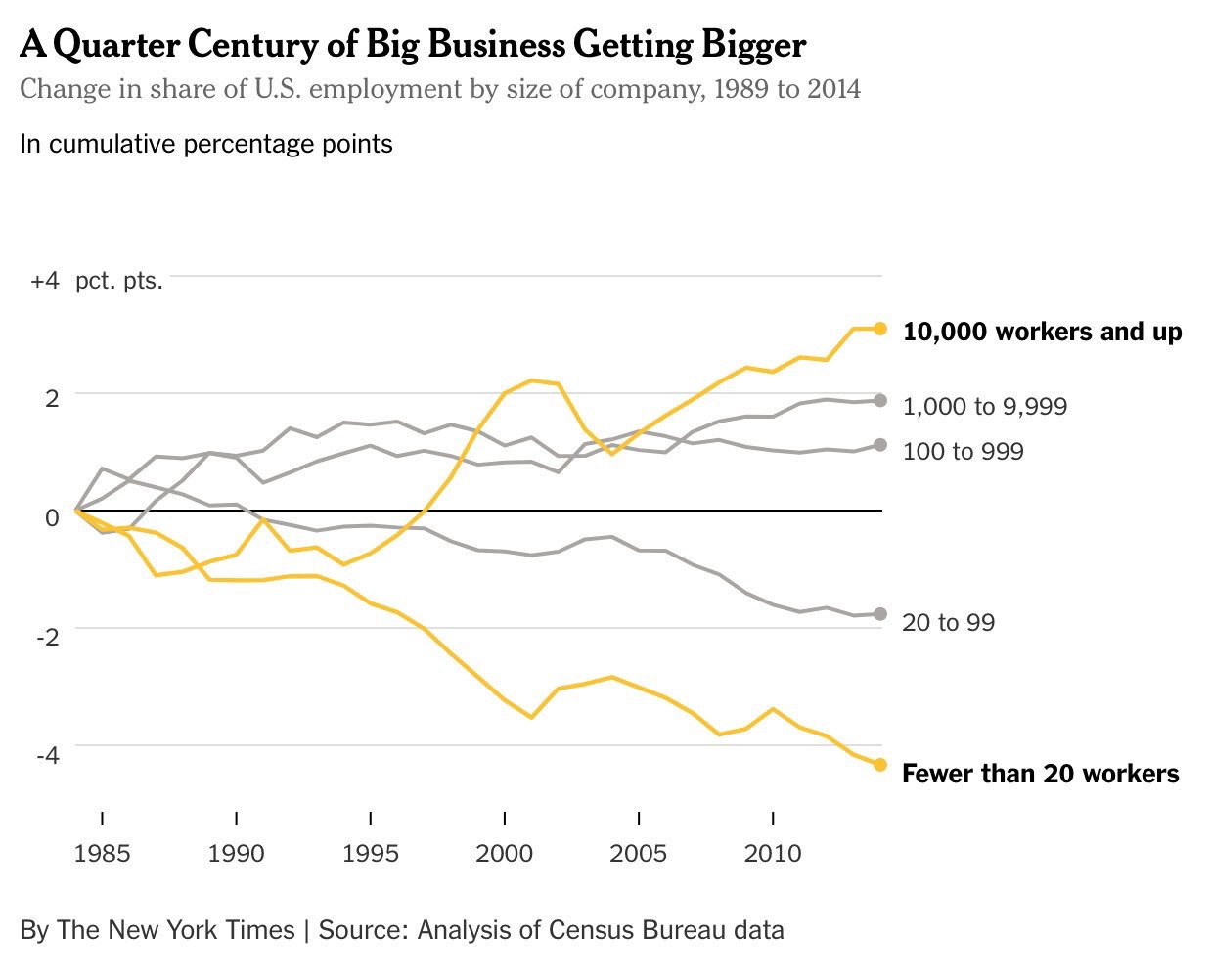 Finally, let’s take one more look at the flattening yield curve in America. I have written a lot about the fact that the 1-year US bond yield is catching up to the 10-year US bond yield in past months, so this is just an update of the ratio for you. 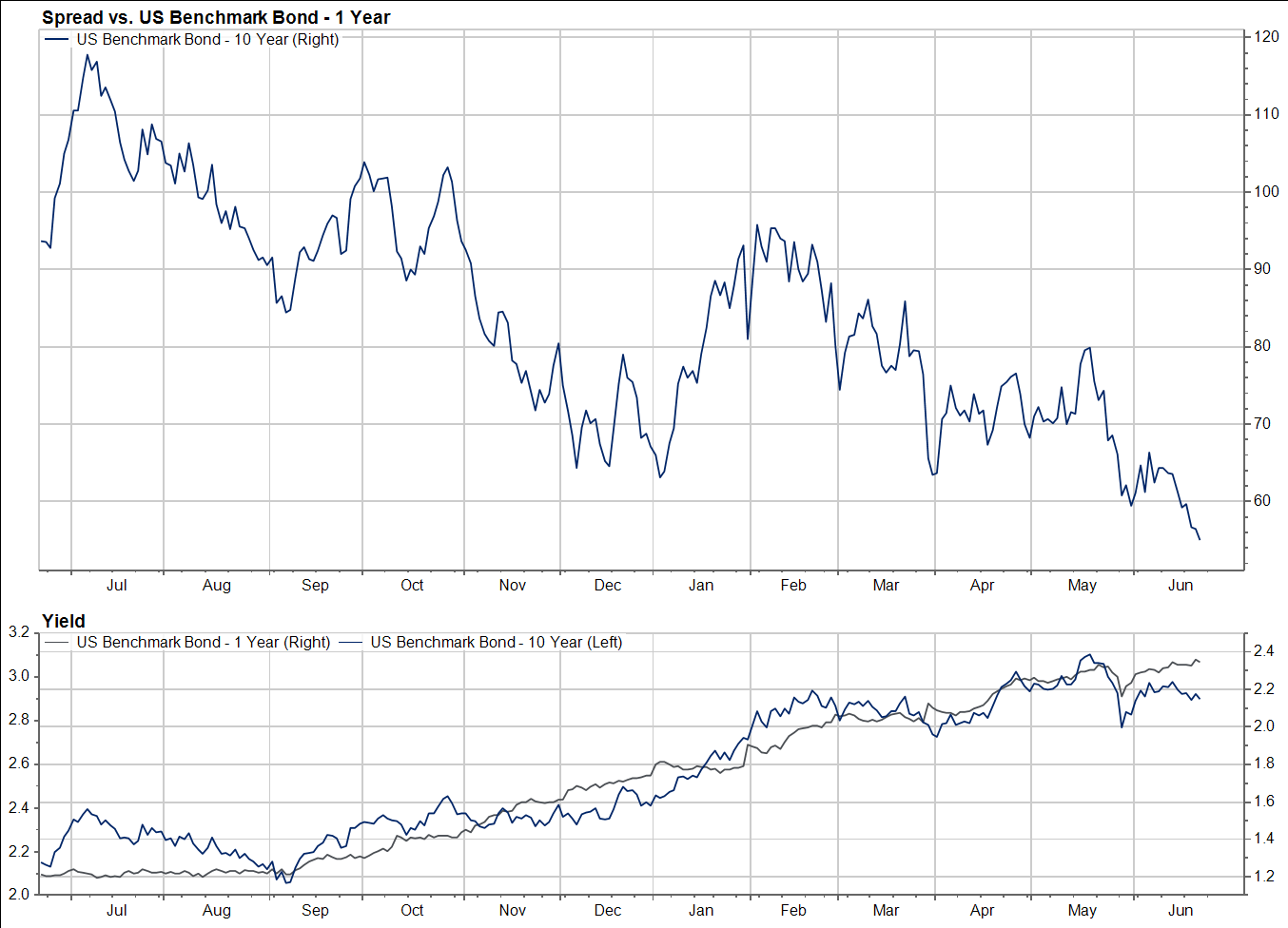 Have an awesome week!

It has been a while since we have looked at specific market trends. When we last took a peek at what was happening around the world it was noted that: US stocks continue to outperform global stocks.