While major players in the traditional oil and gas space have been highly politicized due to the continuing saga of pipeline expansion, some companies are moving into the renewable energy landscape

Feedback on my February 1st, blog post on sustainable, responsible and impact (SRI) investment strategies, has been positive, but has challenged my viewpoint.

Readers brought up many valid questions, like what kind of car do I drive? Or how is my house heated? To which I have to answer: a Subaru Forester and natural gas.

For the record, I wasn’t suggesting a moratorium on oil and gas. I merely wanted to present how demand for SRI investment options has increased, and that choosing to employ these strategies doesn’t necessarily negatively impact portfolio returns as many assume.

I believe—right or wrong—that we are, albeit slowly, transitioning to a green cleantech economy.

Peak oil has come and it will go; it is in a company’s best interest to look at what they can do today to prepare for changes in their industry tomorrow, and while some are clinging to the idea that we’ll never give up our oil addiction this could be just a pipedream.

“Canada’s oilsands industry would be among the first to collapse in a possible global financial crisis within the next 15-20 years, which is when a new study predicts clean energy-technologies will all but kill demand for fossil fuels worldwide.”

The study, which used economic and automotive industry models to forecast future demand for fossil fuels, claims that “this technological shift will drive a sudden and irreversible plunge in fossil fuel prices, wiping out trillions of dollars worth of investment.”

Elliott goes on to quote lead study author Jean-Francois Mercure, a Canadian professor of energy, climate and innovation at Radboud University in The Netherlands, as saying that “the results in the study for Canada are pretty dramatic.”

As an explanation as to why, Mercure is quoted as saying that the “oilsands are particularly vulnerable to major shifts in the oil and gas market because production is relatively expensive, when compared to extraction techniques used in the Middle East.”

It’s his professional opinion that “they’d be the first [fossil fuel market] to collapse if demand slowed significantly.”

Aware to the fact that we are living in a fossil fuel dependent society and that we will continue to rely on oil and gas as we shift into a renewable energy based economy, I wonder if there is a more effective way to vote with (and grow) investment dollars in the meantime.

Is there such a thing as an ethical oil/natural gas company? An energy company of the future?

Research shows that there are some energy companies that aren’t as bad as previously thought.

While major players in the traditional oil and gas space have been highly politicized due to the continuing saga of pipeline expansion, some companies are moving into the renewable energy landscape and have made sustainability central to their corporate visions.

These forward looking companies may have earned my attention.

What are your thoughts and observations on the energy sector? We want to know!

Please send us your comments, questions and rebuttals.

The preceding should not be taken as investment advice or a recommendation. If you’re interested in finding out more about alternatives to traditional oil and gas companies, and seeing which would be a good fit for your portfolio, give Nick a call or shoot him an email to discuss.

This is a topic I wrote about in 2017. As long as the financial world was docile and interest rates stayed low, it made no sense to review the topic.

Since the start of 2018 a number of characteristics of financial markets have changed.

It is time to review NVCC debt instruments once more.

To bring this topic up to date I am going to start with a number of excerpts from a short editorial written by ReSolve Asset Management in 2017, and an excellent quote.

As to new financial instruments, experience establishes a firm rule . . . that financial operations do not lend themselves to innovation. What is recurrently so described and celebrated is, without exception, a small variation on an established design, one that owes its distinctive character to the aforementioned brevity of the financial memory. The world of finance hails the invention of the wheel over and over again, often in a slightly more unstable version. All financial innovation involves, in one form or another, the creation of debt secured in greater or lesser adequacy by real assets. . . . All crises have involved debt that, in one fashion or another, has become dangerously out of scale in relation to the underlying means of payment. (Emphasis mine)

The logic and reasoning for implementing NVCC debt structures comes from excellent planning. By issuing NVCC debt the regulators are trying to protect Canadian tax payers from having to bail out Canadian banks should another financial crisis take hold.

Below is an advisory that outlines the Office of the Superintendent of Financial Institutions (OSFI) expectation of how NVCC debt would buffer tax payers:

All regulatory capital must be able to absorb losses in a failed financial institution. During the recent crisis, however, this premise was challenged as certain non-common Tier 1 and Tier 2 capital instruments did not absorb losses for a number of foreign financial institutions that would have failed in the absence of government support. To address this, on January 13, 2011, the Basel Committee on Banking Supervision (BCBS) released the Minimum requirements to ensure loss absorbency at the point of non-viability (the “NVCC requirement”). These requirements augment the BCBS’ recently published revised capital standards, Basel III: A global framework for more resilient banks and banking systems (Basel III) to ensure that investors in non-common regulatory capital instruments bear losses before taxpayers where the government determines that it is the public interest to rescue a non-viable bank.

Hopefully, you get the idea this is a serious initiative. These are the highest regulators in our country working with the most prominent banking institutions in the world.

Ok, but how might this work in the real world? Again, I quote ReSolve:

Banks make money by taking your deposits and loaning against them. In fact, the law allows for banks to loan out a surprising amount of capital against your deposit, up to 90-95%, keeping only a 5-10% capital cushion. If we assume that banks do this many times over (they do!), and that they’re pretty terrible at risk assessment (they are!), then it’s possible that the amount they’re required to retain may be unsuitable in the event of a confluence of non-performing loans coupled with a bank run.

If I purchase an NVCC, I ultimately own a hybrid financing security that lives in the netherworld between debt (which has higher capital structure priority in the event of liquidation) and equity (which has lower priority). In essence, when a bank becomes troubled and its Tier 1 capital requirements are breached, those NVCC’s are converted to common shares.

The operative word is theoretically. To understand why, let’s do a little thought experiment. Imagine that a bank’s equity capitalization has dramatically and consistently shrunk over the last year, say because the loan book is chock full of energy and commodity related debt. And let’s further imagine that their last three financing rounds – raising $1.2 billion in capital – have been preferred NVCCs, which are automatically converted to common equity if bank capital falls below a certain threshold. If you owned a bunch of those NVCCs and you saw the preferred stock value dropping closer and closer to the conversion threshold, what might you do?

Yes, these NVCCs offered a high coupon rate in an ostensibly ZIRP environment, but ultimately you get what you pay for. A sophisticated investor, for example, might get to the point where he says “ENOUGH IS ENOUGH,” and shorts an amount of stock equal to the convertible value of his preferred shares. In doing so, he hedges away his individual future gains and losses. However, new to the overall market ledger is his equity short. This exerts downward pressure on the common shares, which triggers a potential feedback dynamic pulling both common shares and NVCCs toward the conversion threshold like a tractor beam.

Such is the potentially perverse, unintended consequence of a security whose original intent was to act as a capital buffer!

Ok Nick, I get it…but are there any real world examples of this happening right now?

Below is the chart for a Deutsche Bank 7.5% perpetual NVCC bond. Notice what has happened to the price since the middle of May. 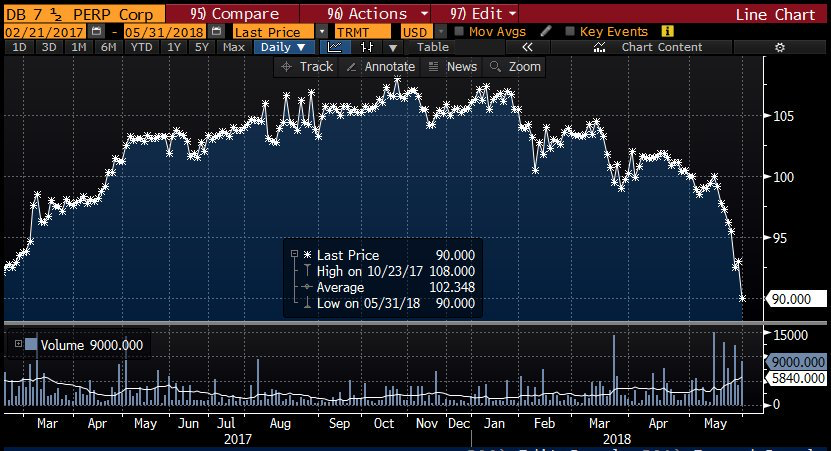 These are early days but, as always, I like to keep you in the loop as to what is happening when it comes to risks in the market place.

As far as I can tell, I have no clients with NVCC positions held individually. We do have to be careful of exchange traded funds (ETFs) though.

Megan and I will do a search again just to make sure. If you have a question please email or call.