I’d bet that every time you hear the government tell you that the rate of inflation you are experiencing in your economic life is around 2%, you almost fall off your chair laughing.

What Does Higher Inflation Mean?

The title of this editorial is important to define before we go any detail. What does higher inflation mean? To start, let’s quantify the question; “Higher than what inflation?”

Are we comparing the inflation rate of 1978 to 2018? Clearly not because inflation was ripping around 15% in Canada and the US at that time.

Are we comparing inflation in Brazil vs. Canada or the US? No, that comparison is basically not worth the time of day to analyze either. They are apple and orange types of inflation.

What about inflation on food, gas and clothes vs. flat-screen TVs and computers? There is definitely a connection here, but still not what I am driving at in asking the question, “What does higher inflation mean?”

So here is how I am going to look at inflation today: How high is the actual inflation rate in North America as compared to the accepted or “common knowledge” inflation rate that the US Federal Reserve and Bank of Canada tell us we experience? 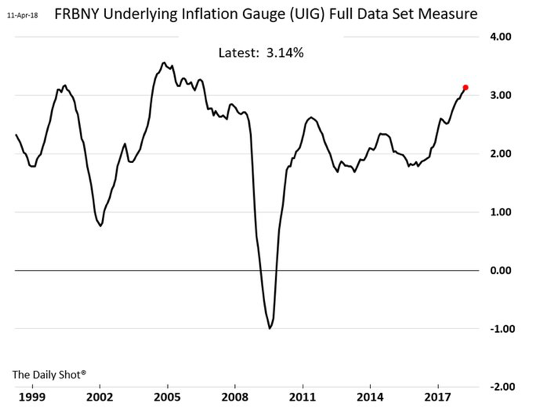 Let me make a little wager with you.

I’d bet that every time you hear the government tell you that the rate of inflation you are experiencing in your economic life is around 2%, you almost fall off your chair laughing. Your personal experience tells you that inflation has been much higher than 2% per year over the past 10 or 15 years.

So let me make another little wager with you.

After the momentary laughter subsides you go about your economic life accepting the government stated 2% figure as correct.

You buy a 2% GIC thinking at least you are breaking even with inflation. You don’t mind that your pension’s COLA clause, if you are lucky enough to have one, is only increased by 2%. You still believe gold is just a shiny rock that has no inflation-protective qualities so its price is doomed to stagnation.

You basically accept the bold-faced lie of 2% inflation because you feel you have no choice and because everybody else accepts it too!

If you want to read the original editorial entitled The Narrative Giveth and the Narrative Taketh Away by Ben Hunt at Epsilon Theory that I am basing this short essay upon please click on the hyperlink. Ben does a beautiful job using the Quid.com artificial intelligence programming for scanning news articles to show that the central bank game of understating inflation is near the end of the road.

For those who just want the bottom line, I will write a few more paragraphs and offer a couple of thoughts about how the jig may be up for the acceptance of a “2% inflation world.”

Nick, how can you think the jig is up? This story has been going on since the 1980s, why do you think it is changing now?

First, I want to show you that understating inflation has been going on since the 1980s. The chart below done by John Williams at Shadowstats.com shows how the government changed how they measure inflation over the years by tracing out what the inflation would have been if they had left the calculations the same as in 1980. 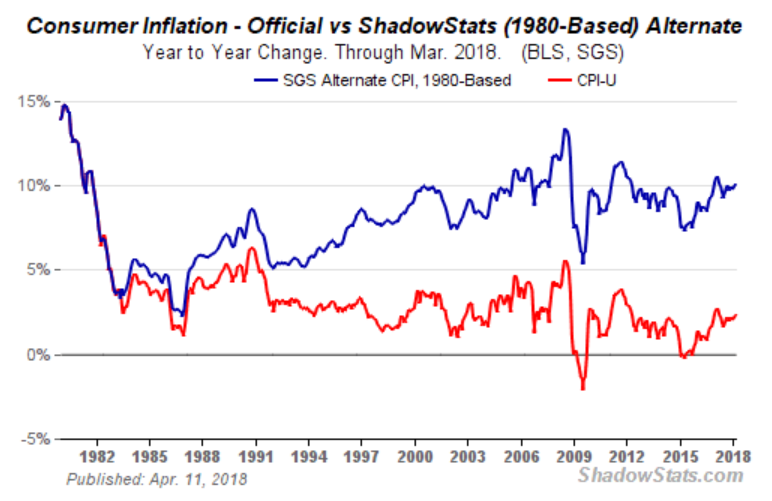 For why the jig is up, I am going back to  Game Theory to look at the backdrop.

Ben Hunt defines it this way:

The reason this dynamic — the transformation of private knowledge into common knowledge — is so important is that the rational behavior of individuals does not change on the basis of private knowledge, no matter how pervasive it might be. Even if everyone in the world believes a certain piece of private information, so long as it stays private — or even if it becomes public information — no one will alter their behavior. Behavior changes ONLY when we believe that everyone else believes the information. THAT’S what changes behavior. And when that transition to common knowledge happens, behavior changes fast.”

Back to our inflation application of common knowledge game theory. Our behaviour towards inflation only changes when we believe that everyone else believes that inflation is running much hotter than 1.75% - 2.00%.

How can we measure what everyone else believes?

This is very cool!

Below is a chart created by a company named Quid.com. This company uses Artificial Intelligence (AI) to measure how vast number of news stories containing specific words correlate together over time.

Quid.com uses Natural Language Processing to correlate key works in many thousands of different posted news articles to see how themes are changing in the sea of information the world takes in each day.

The idea is that the news media is biased to creating articles that appeal to readers and tend to focus on areas of public interest. Track where news article themes are heading and you will track down where public opinion is heading.

Just so you know, Quid.com methodology called both the Brexit vote and the Donald Trump Presidential victory!

Let me show you one Quid.com chart that is showing the public is growing more focused and skeptical of the government’s published inflation reports.

I know the graphic below looks more like a child’s art project than a valid chart of information so I want to help you get a tiny slice of what it is saying. The blue dots represent older news stories with an inflation theme contained in them. The red dots are the most recent stories with the same themes.

Notice how there are more red dots in total AND they are getting more concentrated near the center of the graphic. 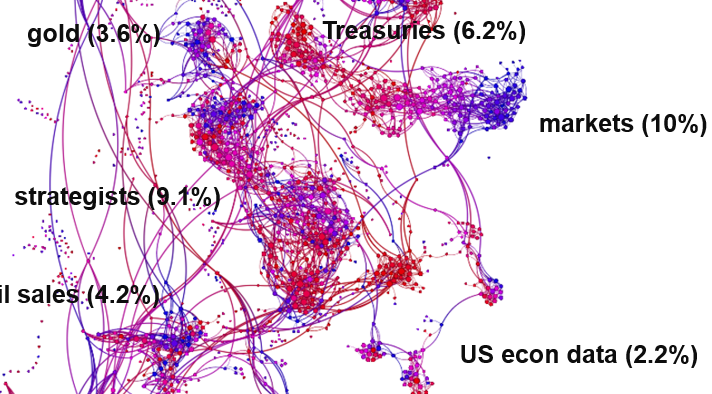 The methodology of the Quid.com AI program would infer from this pattern that inflation data is being talked about a lot more today and that the themes of the articles are becoming more concentrated in the applications to financial markets.

It is an interesting postulation.

If inflation is becoming more of a concern, then the risk of higher interest rates must be considered.

If people begin to act in their investment choices like inflation is a concern, I think it is safe to say that asset markets are going to behave differently than they have in the past 10 years.

Arguably, stocks around the world have already started to behave differently. This point has been made in these comments enough times in the past few weeks that there is no need to show the same graphs again.

So on that note, let’s look at a few different asset classes.

Below is a chart of Toronto real estate sales and price trends. 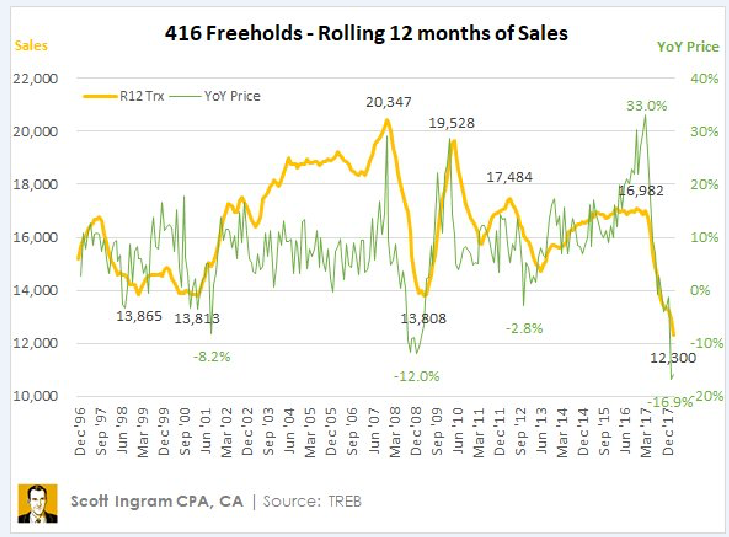 Next, let’s look at auto loan default rates. Note that they are higher now than they were in the “great recession” of 2008/2009. Higher interest rates would impact every area of the financial world where debt and financing are key components of the underlying business model. That’s pretty much everything today.

To close this section off I want to show you a chart of where the earnings expectations are for US companies starting the first quarter of 2018 earnings season. I continue to read where the BULLS on the US stock market keep saying that the Trump tax cuts are going to make such a massive difference to earnings that all of the negatives will simply be nullified by outrageously awesome earnings.

The chart was posted by Liz Anne Saunders who is a raging BULL in her own right, but she clearly shows how expectations are super high going into this first quarter vs the last 6 years running. Let’s see how reality mixes with expectations… 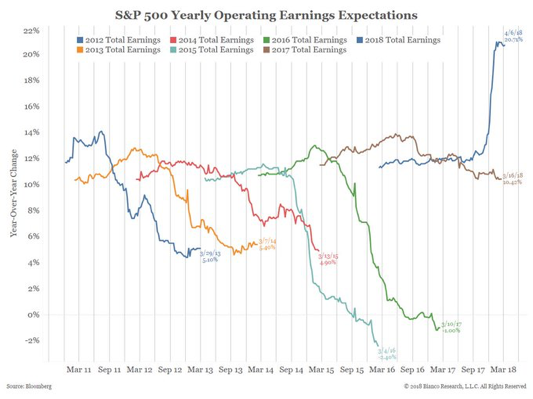 There is a lot to watch. Be careful and control risk. This is not the time to be an investment hero!

Coming from a hockey family, the bus tragedy with the Humboldt Broncos Saskatchewan Junior Hockey League team hit me far too close to home.

I found myself sobbing while eating breakfast Saturday morning when I realized the extent of the tragedy. Hockey is truly a community.

As the weekend went on I believe we were all touched by the generosity of the many who stood behind the small community and families directly impacted by what happened.

People can make a difference in times of grief.

With that thought, I share the drawing below. It blessed my heart. Cherish each day…have a great week.

As technology provides greater intelligence, it’s likely the next generation of investors will play by different rules.