As years have passed and interest rates stayed stubbornly low around the world, more and more of you have been telling me you need more income from your investments.

Doug Kass of Seabreeze partners LLC often uses the expression, “Kill the quants before they kill us.”

The quants he is referring to are the computer algorithms making hairpin investment changes to large, leveraged risk-parity portfolios. The expression makes for a good soundbite, but I’m pretty sure the situation is not quite as explosive as Doug makes it out to be.

That said, it doesn’t mean investors can simply employ a passive investment strategy and forget about following what is going on in the financial world.

The 10-year chart of the TSX comp above depicts two important facts:

Of course, these facts anchor the framework the Tactical Equity Allocation Models (TEAM) are built upon.

As years have passed and interest rates stayed stubbornly low around the world, more and more of you have been telling me you need more income from your investments. Fair enough, this is exactly what all that saving throughout your lifetime is supposed to be used for.

My hope had been that the central banks of the world would have tried to reign in asset prices with more normalized policies after the European financial markets had their problems in 2011 – 2013. Obviously, that didn’t happen.

As a matter of fact, the central banks kept going deeper and deeper into their untested financial policies until we arrive at the financially skewed world of today.

In a sense, I guess I am waving a white flag to the central banks. You win.

What I mean by that is the central banks are never going to relinquish the powers they have to manipulate financial markets to the benefit of the banks vs. the detriment of conservative investors.

Therefore, considering the abstract above I am ready to outline what I perceive to be the present-day challenge: How does one combine the goals of downside protection with higher “spendable” income rates from their wealth?

It is risky to “buy and blindly hold” given the manipulated financial conditions investors are exposed to now, but completely safe investments yield too little return to make a large percentage of a portfolio.

Of course, this is not a new problem, but the central banks are attempting to move closer to more normal financial conditions which MIGHT make a difference to our markets.

Last week’s comment offered a process to assess your personal risk tolerance and rate of return requirements to try and find the right solution to these investment challenges.

In the past 6 weeks I have transitioned one third of my personal portfolio into this strategy since the markets had put dividend paying stocks “on sale.”

Feel free to contact me and ask about what I am tempted to call the “income based TEAM” strategy.

In the past, these comments have stated how powerful of tool Twitter can be for gaining access to information from people you trust.

Twitter can be a cesspool of misinformation and bickering as well so choose wisely if you choose to use Twitter as a tool to help you stay on top of financial markets.

This past weekend, I came across three Tweets that got me thinking about the sordid path financial markets have travelled since the 1987 stock market crash which marked the beginning of financial manipulation by central banks.

Let me set the stage for what you are going to read.

Nick Leeson is a name you may recall. He was a derivatives broker whose fame is derived from being the man who caused the spectacular collapse of Barings Bank, oldest merchant bank in the UK at the time, by pyramiding unauthorized trades on behalf of the banks own accounts.

When he was on a roll, Mr. Leeson accounted for 10% of the Barings total profits. And when things went wrong he tried to fraudulently hide his mistakes in multiple “error accounts” until the errors added up to an amount that broke the bank.

Before you read the following replies; how does that Tweet make you feel after reading the brief history above?

So here is the sequence of replies that came to Mr. Leeson from various people. 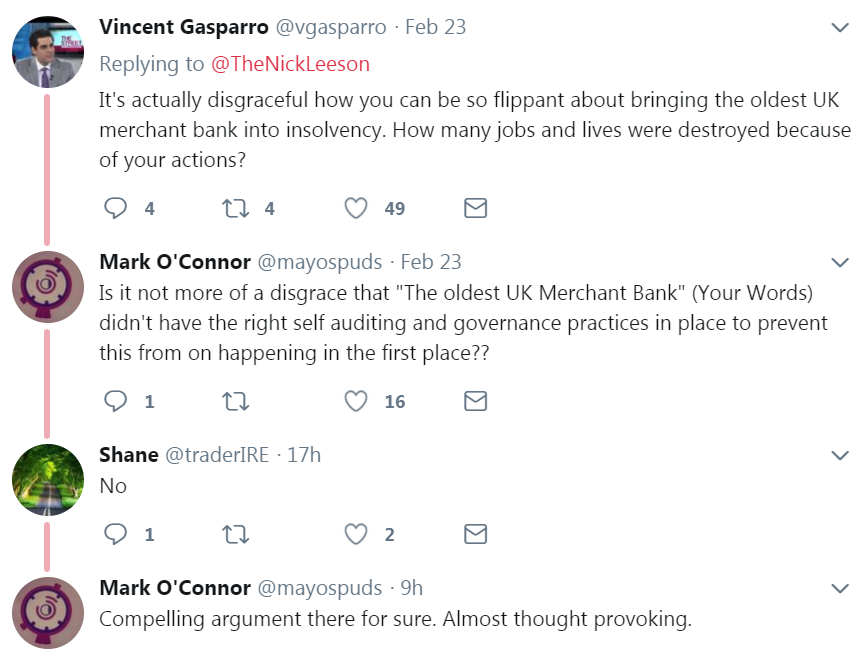 After reading the reply Tweets I must admit to feeling torn inside.

Because Barings Bank didn’t say a word when, for years a single trader was making 10% of their profits. How was that not been a huge red flag?

But when it all when wrong, it was Mr. Leeson’s fault.

If you have any comments you would like to share about this story please send them my way. I always appreciate your opinions.

The changes in the BC budget towards real estate purchase and ownership rules were fairly substantial. Not much has made an impact so far, so the policies to try and make a difference continue to grow in extremity.

The two most controversial changes:

The BC government is trying to do something and I think we all get that, but making radical changes on the heels of the new mortgage rules that were enacted nationwide at the beginning of 2018, is creating a lot of change in a short period of time.

My personal belief is that the only long term solution to the housing issues around the world are higher interest rates. And these are coming too.

The next six months will prove to be interesting for real estate markets in BC. I imagine we will see the usual “high real estate listing season” take hold starting in March. Inventories of home choices for many hopeful buyers has been awful for a few years now, maybe we will see more balance in the market this spring?

One chart that caught my eye is shown below. 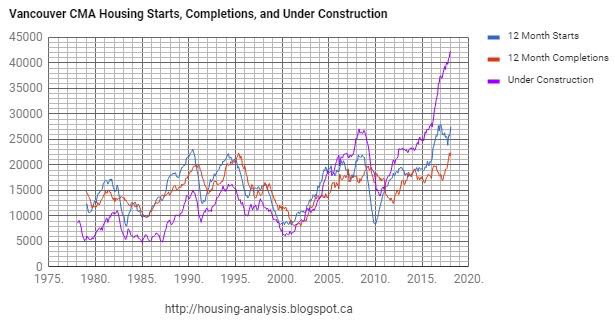 The purple line is show condos in the Vancouver market place under construction.

Wow, what if the demand curve shifts due to the higher interest rates and the new changes in the budget?

It is a trend worth watching.