The problem with the Chinese market, or any market, is when it isn’t one.

By 1978, China’s determined effort at egalitarianism had resulted in tens of millions victims, all equally dead. Faced with starvation, farmers in the tiny village of Xiaogang gathered in a mud hut to sign a secret pact, allowing each family a plot of land and to quietly keep back some of the harvest. This was a deadly risk. Every single straw was considered communal property, and execution wasn’t unheard of for so little as a handful of grain. But after so many broken eggs and still no omelet, they hid the contract inside a piece of bamboo in the roof of a nearby home, agreeing that if one or more of them got caught, the others would raise their children for them.

By the end of the season, they had harvested more than in the previous five years combined, startling party officials in to a rage. But those same officials had incentive to brag about the data, and the timing was right. Thirty years in to the utopian disaster, their higher ups were finally hungry enough to experiment. Deng Xiaoping, the Chinese leader, caught wind of this mustard seed and grew it to what we have today: “Socialism with Chinese Characteristics.” You can get rich but the Party is still in charge. That old illegal 1978 contract now resides in a museum.

In 2015, the Chinese stock market fell off a cliff. After months of patriotic-infused push from government officials, it had become over-inflated, tumbling under the weight of its own exuberance, which is normal, minus the government part. But at this point, the authoritarian regime froze trading, and began arresting financial writers who dared publish bad news. We can expect more ham-fisted authoritarianism to befuddle China, as noted below 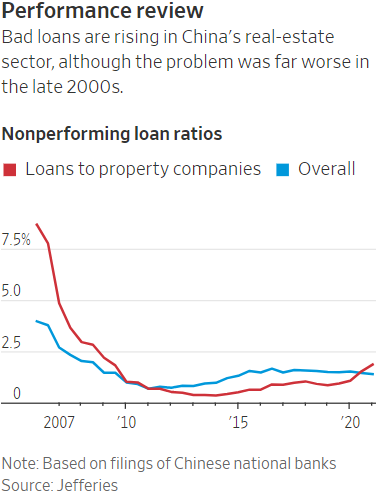 Not-so-grande. In socialist circles, “speculation” is a filthy word, implying manipulation, rather than smart risk-taking. “Homes are for living in, not for speculation” according to Chinese officials. Regulators cap banks’ exposure to real estate, and restrict developers from taking on new debt, like that clumsy boss breathing over the market’s shoulder.

When developers get a headache, first-time buyers and tenants, become the flung out wrong end of a whip. When developers run out of credit, folks get run right out of the house. The solution is to let some wily entrepreneur build more homes, not less. Some builders will make a profit (also not a dirty word) and then more builders will jump in, pushing push prices down. Some of them will fail, perhaps spectacularly. It’s messy. Authoritarians hate messy. But it works.

Have a good week!

On a hot tin roof

Good afternoon, Stuff my dad would have brought home in a tabloid… in the 70’s: With apologies – the kids are gone, and I’m all backed-up with dad jokes. It’s reported that sometime in the middle-ages a nun in a French convent began meowing one day for...