Love and Money: Near the climax of the most recent BBC production of Les Miserables, naive young Cosette tries to sneak out to rendezvous with her earnest lover Marius. But just then the street battle between the rebels and the French army is on, and Valjean stops her from scurrying into a deadly risk she couldn’t begin to understand. Frustrated, she uncharacteristically shouts at him: “I hate you!” As she storms off, his face whitens, and 15 years of tenderness drains from his soul. I’ve been there Jean. Seriously, and more than once.

Valjean might have known better, but when Cosette, his one flicker of joy, turns on him, his grief is so overwhelming that his emergency plans all unravel, and he completely loses his will to live. The idealistic boyfriend, Marius, is equally crestfallen with the thought of losing Cosette, and welcomes, even seeks out death in battle. Sounds melodramatic, yes, but there’s bigger themes at play than puppy love.

Victor Hugo was contemporary with Charles Dickens and Karl Marx, and each wrote movingly about the gripping, terrible plight of the poor. While exploring the issues, the dramatists paint complex scenes of intense passions that overwhelmed both the rich and the poor. Valjean is a small factory owner, clearly imperfect, but penitent, generous to a fault. Scrooge is a jerk, but eventually finds joy in sharing.

But to Marx, the problem was, in effect, unidimensional. Marx’s man lives by bread alone – once his belly is filled, all his other lusts melt away. (Which is odd. Marx was a bit chubby, and couldn’t seem to keep his pants on.) His assertion borders on magical thinking. The wealthy class (himself excluded) is branded as incurable, while the poor are universally noble. In real life there are no flat characters.

Yesterday my daughter snuggled up to her husband as he was working from his COVID home office. On the phone with a new client, he was wrapping up the call while his pretty young wife put her arms around his waist. In a temporary leave of clarity, he closed the phone conversation, saying: “Alright. Bye. I love you,” then awkwardly hung up, red-faced.

Wrapped around her little finger he is. And that power relationship is just fine with her. And him. And me.

Not sure about the woman on the phone…

Top-Dogs: This one shows the dramatic shift in the top 10 companies over time. None of the 10 largest stocks by market-cap, which would have dominated a global market-cap index, in 1980 or 1990 are in the top 10 in 2021. In 1980, oil stocks were the titans. In 1990, Japanese conglomerates dominated. In the 2000s, the rise of the technology and communications industries paved the way to entry in the top 10 for Chinese firms a decade later. Today, the only two companies to remain in the top 10 since 2010 are Microsoft and Apple. Last year big tech skyrocketed as the global pandemic pushed us all into a more-digital world. History suggests more turnover. 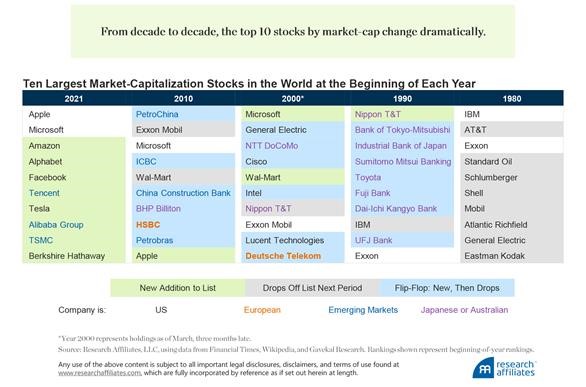 House price growth in OECD countries reaches a record high, with especially sharp growth over the past 12 months. 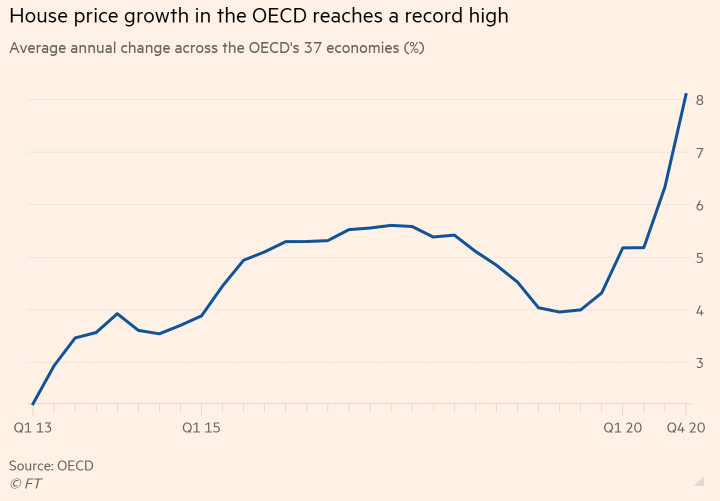 Which is tightly tied to lumber prices 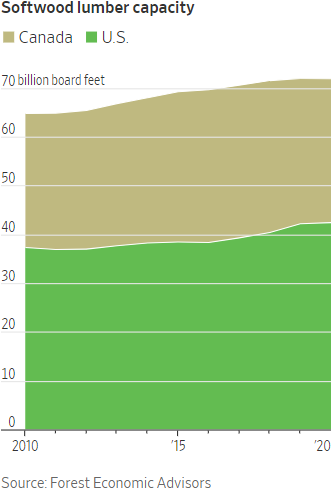 Softwood lumber capacity in North America (see chart below from the Wall Street Journal): “North America’s sawmills can’t keep up with demand, which has sent wood prices on a meteoric rise. Don’t expect new mills to start popping up though. Executives in the cyclical business of sawing logs into lumber said they are content to rake in cash while lumber prices are sky-high and aren’t racing out to build new mills, which can cost hundreds of millions dollars and take two years to build from the ground up.”

A Shot in the Arm: Canada is making progress on the 1st vaccination globally, which is good news. But in terms of full vaccination, we still lag. Lessons here in government and market efficiency will hopefully be absorbed in retrospect. 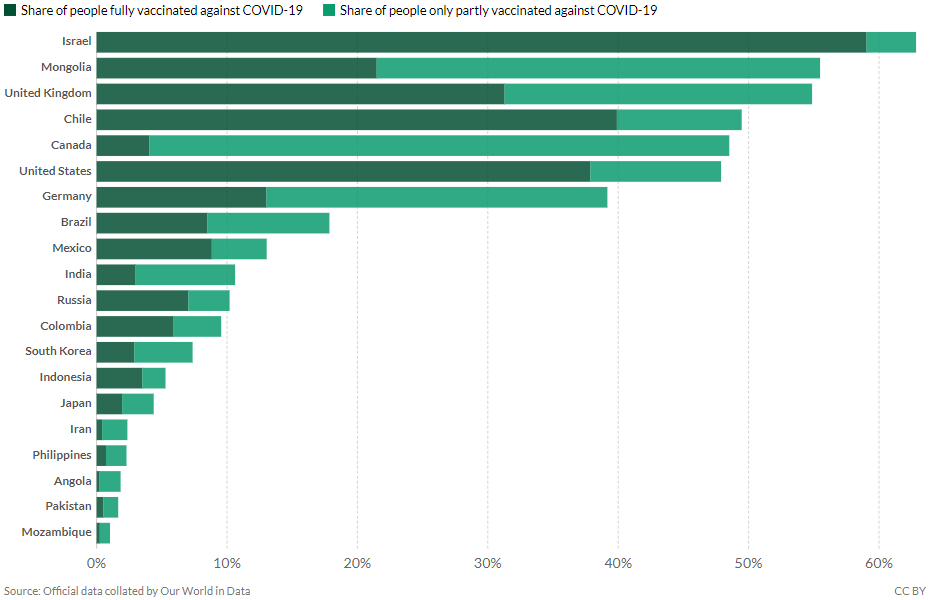 It’s the long weekend! Have a fantastic one.

It’s Friday Are you Saying I’m Fat? Today, a timely report on inflation, which, like a big, over-yeasty cinnamon fritter, plays an outsized roll (get it?) on markets. The gooey centre of the debate is whether or not the expansion is a sticky problem....

Transplants. As the chart below shows, today China dominates global inputs for solar panel production. What the chart doesn’t show that their industry takeover, less than a decade in the making, was built in a region dominated by what several countries...

It takes a bit of a leathery soul to scratch out a living in the BC interior. I’ve cashed a pay cheque for a businessman whose employee, the payee, used a shoulder tattoo as ID. I had a toothless 85 year-old fishing client whose half-rotten boat was held...