On TV the other night, the male lead, played by a beefy-looking Russian, was portraying a rugged outdoorsman. He was believable enough until he had to split a few pieces of firewood for his damsel -- and then the fourth wall sort of just fell on him. (Why? Just… why?) Note to movie directors: Chopping firewood should look manly, graceful. If the actor is worried he’ll hack off his tibia, bring in a stunt double. The urban actor class shouldn’t swing a hunk of sharp iron at the end of a hickory stick without extra-absorbent underpants.

Contrast that with the guy on a quad in my neighborhood the other day. He’s scooting home with a goofy smirk, a chainsaw strapped to his front rack, and a 12-foot log tied to the side of his bike. He makes brief eye contact with a (clearly jealous) perfect stranger who’s out walking his dog, and the conversation goes:

The Virus and the Market:

There has been a sense of calm in global equity and bond markets of late. Gages of broad market volatility now sit down near levels not seen since before the pandemic began more than a year ago. This in the face of another wave of COVID-19 across the globe. We provide an update on the virus situation below, and discuss the divergent economic paths that countries may experience as we move through the rest of the year.

At the current pace of vaccinations, the U.S. remains on track to become the first major economy to achieve herd immunity in coming months, as shown in the chart below: 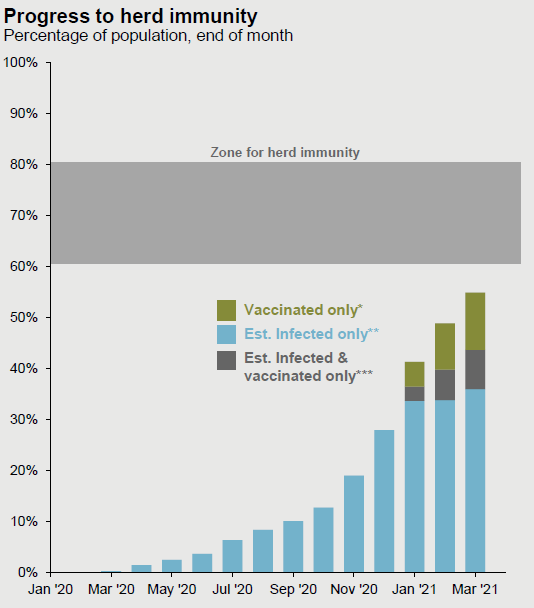 Another Wave of Worry: The past few weeks have been characterized by an acceleration of Covid cases across the world, fueled by variants of the virus that are exponentially more transmissible, infecting younger people and leading to a surge in hospitalizations in some jurisdictions. This is particularly the case in Canada, which has seen its 7-day average rate of new daily infections rise to nearly 6500, versus the 4500 from two weeks ago. Ontario represents close to half this figure, but Alberta and British Columbia have seen cases meaningfully accelerate, while Quebec’s growth rate is not far behind. Most of these provinces have implemented new lockdowns or restrictive measures with the hope that levels could plateau in a few weeks from now. Saskatchewan and Manitoba have also seen increases, though to a lesser degree. Meanwhile, in the Maritimes and northern territories, new daily infections have fortunately not increased much.

Encouragingly, the U.S., U.K., and Israel continue to see limited acceleration in new infections, suggesting that a combination of vaccinations and previously high infection rates may be limiting the opportunities for the virus to spread. Nevertheless, it may be too early to claim victory as new cases remain elevated, and a handful of U.S. states such as Michigan are experiencing meaningful increases in infections, driven by the same variants that have taken over in Canada.

In Europe, the news is somewhat mixed. There are some early signs that cases may have peaked in some countries given lockdowns implemented weeks ago, but some continue to report new highs in daily fatality rates. Elsewhere, Japan’s infection rate is on the rise. Brazil’s figures have come off a recent peak but remain elevated, and India recently reported a record high of more than 130,000 new daily infections.

Lastly, this chart shows what investors could expect in the year following the anniversary of a market cycle bottom. Data from the most recent 15 bear-market bottoms and subsequent returns following the one-year anniversary of those low points show only one time when the 12-month timeframe showed a decline. The range of outcomes is shown in the table below 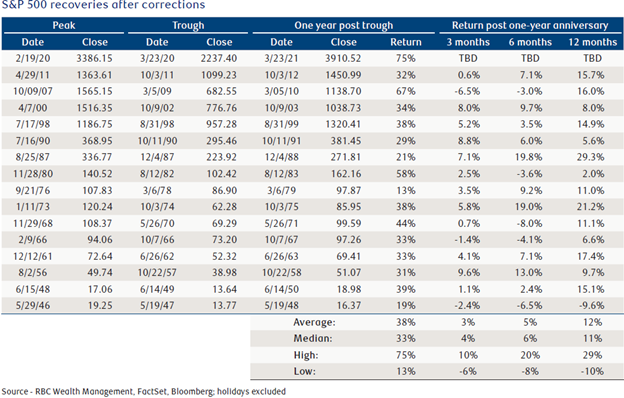 I signed up for my vaccine yesterday, although I don’t have a date yet!