Rational disagreements, even heated ones, can be constructive if honest ground rules are shared. But shaming and political maneuvering haven’t been helpful in COVID-and-finance debates. Our choices will be judged by history, but we’re better off to embrace discussion now. Regardless of which side we take, removing a worm from a barbed hook isn’t pretty.

The (1940) Un-Debate: Because he was loyal to the communist vision, Trofim Lysenko was a hero in his time, promoted by Stalin to president of the (Soviet) Academy of Agricultural Sciences. Mr. Lysenko believed seeds could be planted unusually close together and trained to follow socialist principles. Such crops would be good comrades, cooperating to produce a better yield, rather than compete for sunlight and nutrients. Competition was an inferior “capitalist” idea.

Following the Soviet’s “Scientific Marxism,” China and other regimes fell in line with the man who then amounted to chief agricultural authority over hundreds of millions of agrarian peasants, on the precipice (or so they thought) of world brotherhood and prosperity.

Except it was all a bunch of dogmatic hooey, not remotely based on science. Hundreds if not thousands of legitimate scientists who dared disagree were rounded up and dumped into prisons or psychiatric hospitals, even sentenced to death. Over the next couple of decades, Lysenko indeed transformed Marxist agricultural economies – from bad to worse. Some 40,000,000 unfortunate souls starved to death. (See heroic addendum next week).

The charts below show that the feeding frenzy on cheap government borrowing has yet to really impact annual government budgets, thanks to low interest rates. Thus, each hint of inflation will shake markets to some degree. Which is a good reason for a robust discussion on debt now. 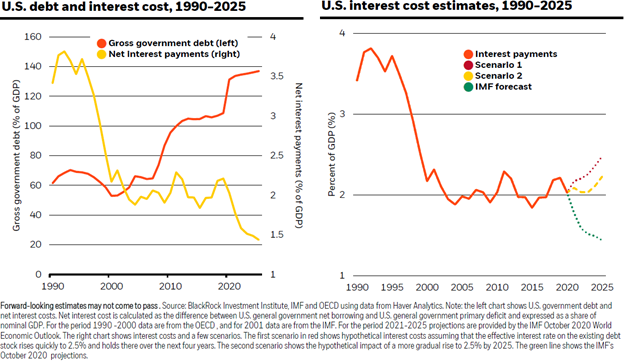 And… Speaking of the Money Supply:

On a hot tin roof

Good afternoon, Stuff my dad would have brought home in a tabloid… in the 70’s: With apologies – the kids are gone, and I’m all backed-up with dad jokes. It’s reported that sometime in the middle-ages a nun in a French convent began meowing one day for...