Find a quiet spot and listen carefully to your smartphone tonight. It’s a bit tricky, but it’s there. On an ethernet asteroid halfway between the Bloomberg App and the Financial Post – or alternatively out on the back deck just under the breath of the cold October breeze you can just barely make it out. It’s the crackly voice of the late great hockey broadcaster Danny Gallivan, barely discernable in the squelch.

“Trudea’s takes the puck! He’s got a breakaway! Skating at sizzling speed, he jilts Johnson, triumphs Trump and pulls a spinorama past the Spaniards and on to the net!

“He’s all alone now!” Bearing down. He shoots, he scorerrrrrrres!!!!”

Which is to say -- as noted in the chart below -- Canada is auspiciously winning the spend-o-rama. Far beyond the coin in the crack of the Canadian couch, our discretionary governmental spending is, well as Danny would say: “scintillating!”

We’ve all heard so much about the whopping spending the US is throwing at the pandemic, but the blue bar (below), for Canada, is nearly twice the magnitude of the US in relative terms. 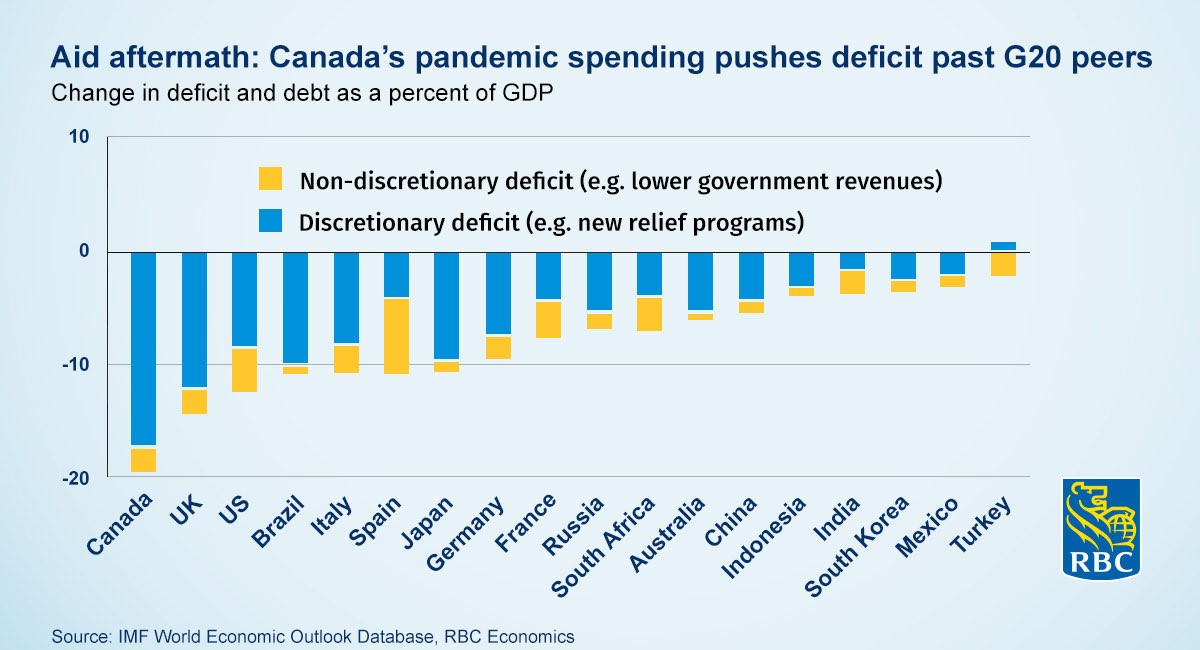 None of this is to suggest a robust response isn’t in order. But these numbers are not theoretical. This is really truly actual money. It’s debt. Paid back in for-sure factual funds. And if there is some sort of limit, when to we run up against it? How do we tell when we win or lose?

In other news (the only news it seems)…

U.S. election: What’s in it for Europe and the UK? The world can’t take its eyes off the U.S. election—and not only because it looks like a Netflix show. The outcome will impact U.S. trade, foreign, and regulatory policies. We look at the repercussions for the EU and UK as well as portfolio strategy. (page 1 and below)

Treasury yields move higher on fiscal policy – Longer-maturity U.S. Treasury bonds sold off this week as markets considered the potential implications of more aggressive fiscal policy. We look at those policies in light of the federal government’s existing debt and the Fed’s survey of economic conditions. (page 3)

As Danny would say: “Have a canonating weekend!”

The problem with the Chinese market, or any market, is when it isn’t one. By 1978, China’s determined effort at egalitarianism had resulted in tens of millions victims, all equally dead. Faced with starvation, farmers in the tiny village of Xiaogang gathered...