Who are these guys?

There’s magic when a gritty Canadian leads your team into the post-season, because he’s already been there a thousand times – in his head. Canuck captain Bo Horvat is a living highlight reel this week, and for the first time in 40-years I’m watching my team in the playoffs without feeling like I just swallowed a spruce tree. Go Bo!

Markets: With Q2 earnings better than feared, what does this mean for the 2020–21 outlook? And as the markets rally to pre-crisis levels, is the current valuation a sticking point?

Just Saying No: Bank lending practices are trending less rosy for small companies, with the highest levels of credit restriction we’ve seen since 2008.

Regional highlights: The Canadian job market, the UK’s GDP decline, and the Chinese resumption of tourist visas to Macau.

Post-COVID Trends: It’s Not Marcus Welby: Telemedicine was already coming into its own as patients, insurers, and health care providers warmed up to the technology and calibrated the risks, but the pandemic has accelerated the shift.

Nice way to start the day! This velvety beast was just a few yards from home this morning. He looked back and said: “Hey, nice bike.” My reply: “Thanks. Nice rack.” 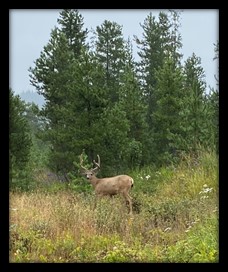 He won’t remember but I do: On his way to his very first pro gig, I shared a sidewalk with him and his hockey bag for 10 minutes at YVR, and wished him luck. This week, former Prince George Cougar and Smithers hometown hero, Dan Hamhuis announced his retirement, after a 16-year NHL career. The Canadian dream couldn’t have happened to a nicer young man.

Enjoy your weekend. There’s a rumour of sunshine.