Empathy enables leaders to create motivated teams and productive cultures, and equips employees to understand customer needs. Failure is key to developing resilience and a growth mindset – arguably some of the most important attributes required during uncertain times. Through their award-winning Empathy Toy and their much-anticipated Failure Toy, Twenty One Toys is well on its way to creating empathetic and resilient leaders and teams.

While the toy was being tested in the classroom by day, Ben-Ari would also test it with sighted (and blindfolded) adults at night. When she discovered the toy was just as challenging for them, she realized the toy had many different applications.

After winning a prestigious design award, Ben-Ari was determined to get the toys into schools. She would attend educational conferences and leave the Empathy Toy on tables and walk away. Her tactic worked, as educators would surround the toys, highly interested in their application. Eventually, she got her first pre-order with a school board in Ontario, which paid for her first production run.

And then COVID-19 changed the world.

Ben-Ari and her team were booked throughout 2020 before the pandemic derailed their plans. One of their clients contacted them to ask if the Empathy Toy could be played online.

“Within a few days of COVID hitting, we were prototyping with our own team. Luckily, we were able to take the Empathy Toy online,” says Ben-Ari. “We haven't turned it into an app – our values have always been on using beautiful, tactile, primarily wooden puzzle pieces to bring out conversations people normally wouldn't have.” But now she can ship physical toys to all or a select few participants for each workshop and the remaining participants receive photographs. Everyone has an image of the same puzzle pattern, just from a different perspective. Then everyone turns off their webcam and has 10-15 minutes to describe a three-dimensional, multi-perspective image so one or more players can recreate it.

She explains that the Empathy Toy now addresses challenges in communication that come with remote work. And, the opportunities for creative communication, resilience building and EQ muscle development become evident quite quickly.

And companies are loving it. Heidi Schwartz, a branch manager, says: “We're encouraged to always be learning, and it's not just about taking exams or passing courses, it's about learning as humans. Now more than ever, the world is in need of empathy, resilience and creativity, so last night I joined an Empathy Toy global play group for my personal development. It was so great to connect with like-minded individuals from around the world to learn and practice empathy in an environment of play.” 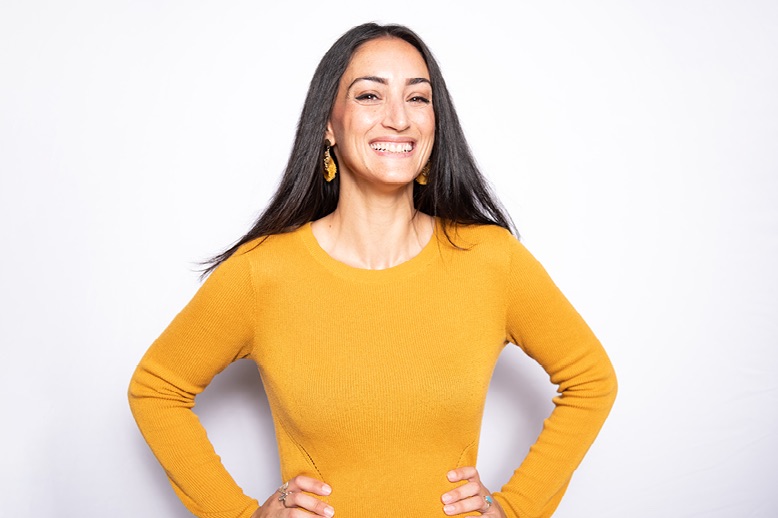 The impact of SheEO on Twenty One Toys

Three years into Twenty One Toys, the Empathy Toy was in over thirty countries and hundreds of schools. At that point, the business was completely boot strapped. “There wasn't a line up of people who were saying 'This is definitely going to work,'” Ben-Ari explains. “I was determined to build the company on my own terms.”

Part of this determination was a result of disappointing encounters with male investors. “I could get my foot in the door at a meeting, but it wasn't the meeting I wanted – or ever wanted to be in,” she explains.

SheEO, however, was a completely different model. Ben-Ari admits she didn't even know their kind of support was possible. “I had come to terms with the idea that it was all entirely on me to inspire my team to continue this vision. It wasn't until the SheEO funding and support that I realized it didn't have to be that way. I have never experienced an organization that so genuinely said: 'I know this is really hard, how can we help?' There was no ulterior motive.”

When she was selected as a SheEO Venture in 2015, the interest-free loan meant Twenty One Toys could go into their next production run early. Beyond the funding, however, the mentorship, support and introductions were invaluable.

“I'm an activator for life”

Today, as Ben-Ari is busy with production of the Failure Toy, she's as passionate about SheEO as ever and has been an Activator for the past five years. I know these Ventures will change the world – every Venture I know is doing creative and innovative things – if I can have even the slightest bit of impact, it's a no-brainer,” she says.

She's also overwhelmed by the amount of support she has received through SheEO following the onset of COVID-19 – and how quickly the organization was able to pivot and support Ventures.

Empathy, resilience and adaptability are key attributes for success in work, school and life in general. Twenty One Toys is helping to build and develop these key skills, while SheEO, supports this and other world-changing Ventures through a community of generosity and giving back.

Now recognizing 20 students and increasing grants from $4,000 to $5,000 for each academic year, the expansion of the program offers greater support to more students .