Although it left both policy rates and the pace of asset purchases unchanged, the European Central Bank (ECB) adopted a hawkish tilt at its February meeting in a stark reversal of its long-standing position. Markets are now pricing in the first increase in interest rates as early as June, as opposed to December previously, and 0.40 percent in rate hikes by the end of 2022.

The resilience of the eurozone in the face of the omicron wave, tightening labour markets, and increasing inflation all led to this abrupt change of stance.

Despite COVID-19 restrictions and supply-chain shortages, eurozone GDP grew 0.3 percent quarter over quarter (q/q) in Q4. While a marked slowdown from the 2.3 percent q/q growth generated in Q3, we think it points to some resilience under difficult circumstances.

The regional contribution to growth has changed markedly, however, with France and Italy driving growth, posting quarterly GDP increases of 0.7 percent and 0.6 percent, respectively. By contrast, the German economy, historically the engine of growth for the bloc, shrank by 0.7 percent in the period, due to supply-chain shortages in the automotive industry. While this performance is disappointing, there are signs manufacturing production started to improve in December. Overall, GDP in 2021 grew 4.6 percent in the eurozone, with seven percent in France, 6.5 percent in Italy, and a more muted 2.8 percent in Germany.

Q1 2022 is off to an encouraging start, with economic activity indicators pointing to continued expansion. Growth is likely to pick up later in the year, as supply-chain shortages ease. For now, the consensus expectation is for above-trend GDP growth of 4.1 percent in 2022, as financial support from the EU recovery fund contributes fully. As such, for the first time in five years the bloc’s economic growth is likely to exceed that of the U.S. However, two factors need to be monitored closely—labour markets and the energy crisis.

Labour markets recovered further in December, with the overall unemployment rate falling below its pre-pandemic level, to seven percent, thanks to strong demand. Job vacancies are higher now than in 2019 due to a decline in active participation and reduced cross-border mobility, both caused by the pandemic. There also seems to be a shortage of skills necessary for the green transition.

The European Commission’s euro area Employment Expectations Indicator (EEI), which measures companies’ hiring expectations over the next three months, stands only slightly below its highest level on record, pointing to strong hiring going forward. Should labour demand continue its strong recovery, wage increases, which are currently running at low single-digit levels, could accelerate, at least in some sectors, fuelling inflation.

Higher energy prices, natural gas prices in particular, are denting consumers’ purchasing power. EU natural gas prices have increased close to 300 percent over the past year. Most governments have put in place measures to reduce the impact of high energy costs, ranging from capping consumer gas prices in 2022, as France did, to reducing taxes, such as was done by Italy and Spain, which reduced the consumer sales tax on energy. While this may take the sting from the vertiginous increase in prices, gas prices remain elevated and the risk is that consumers may well respond by cutting spending elsewhere.

The energy crisis is also having a major impact on inflation, which came in higher than expected in January. The headline harmonised index of consumer prices reached 5.1 percent. Energy prices were the main driver, as core inflation was a more subdued 2.3 percent for the euro area as a whole.

That energy is such an important element of the current surge in inflation is also visible in the large spread of national inflation, with France—which has capped energy prices—at one end of the spectrum with inflation of 3.3 percent and Lithuania (12.2 percent) at the other.

The last time the ECB tightened monetary policy, in 2011, after the global financial crisis, it caused significant volatility in financial markets and choked off the recovery. The central bank soon had to abandon its policy. Since then, important progress has been made aiming to strengthen regional institutions.

In particular, we think the establishment in 2020 of the €750 billion EU recovery fund points to a willingness to share fiscal burdens. Financed by borrowing on behalf of the EU as a whole, the fund is largely allocated to southern member countries as they have suffered the most from the pandemic. The Banking Union, established a decade ago, ensures that if a financial institution needs to be recapitalised after bond and equity investors have been tapped, the European Stability Mechanism, an intergovernmental organisation which provides financial assistance, can be accessed, so that the host country is no longer the sole recourse. Moreover, the banking system is now much stronger, as the banks, prompted by regulators, have taken steps to rebuild their balance sheets. Finally, the ECB has given itself more tools to manage volatility in financial markets.

These structural changes suggest to us that the region should better withstand the upcoming monetary tightening cycle. Nevertheless, the ECB plans to keep a close eye on how its highly indebted member countries are impacted by its actions. Italian sovereign 10-year bond yield spreads relative to their German counterpart have already widened since the ECB meeting, though they remain much below their 12-year average. 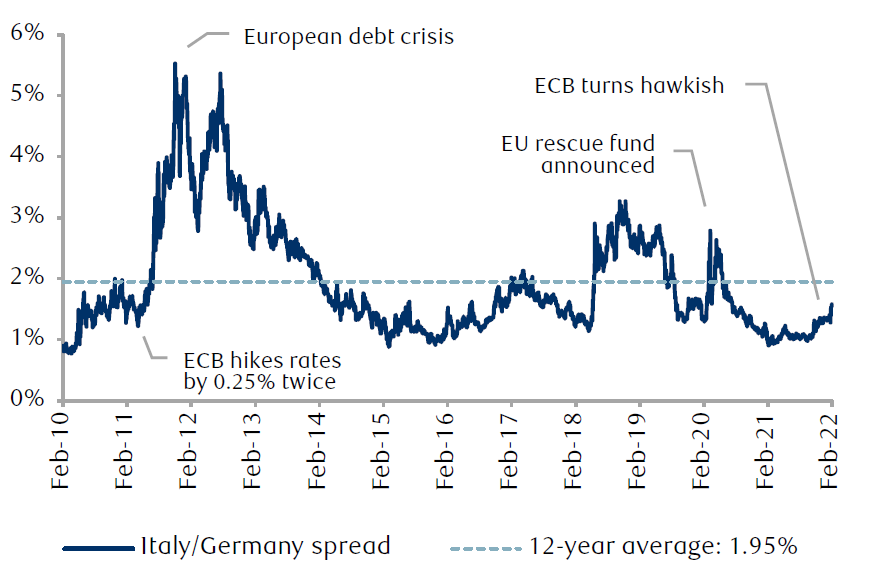 The chart shows the difference (also known as the spread) between 10-year Italian sovereign bonds and German sovereign bonds. In 2011, at the height of the European debt crisis, the yield on the Italian bonds was as much as five percent higher than their German counterparts. Italian debt was thus much more expensive to service, and riskier, than German debt. During the COVID-19 crisis, the spread was around three percent. While the spread had fallen to around one percent last summer, it picked up to 1.6 percent after the recent ECB meeting, but is still below the 1.95 percent 12-year average.

The 2022 global investment backdrop has already set out to be more volatile than last year’s. That also applies to European equities, particularly given the tensions between the West and Russia. Yet we continue to suggest holding an Overweight, or above-benchmark, position in this asset class. Given the prospect of above-average economic growth this year, we believe earnings growth expectations of around seven percent are undemanding, leaving room for upgrades. Valuations have improved and the MSCI Europe ex UK Index trades at a forward price-to-earnings ratio of 14.3x, below its five-year average. As for sectors, we think Financials appears well positioned to benefit from higher interest rates and the robust growth outlook, while the Industrials sector could also provide attractive opportunities given Europe is a leader in green technologies. 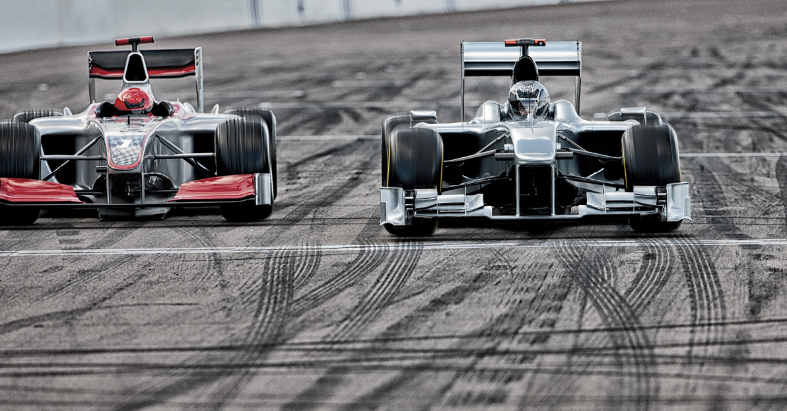 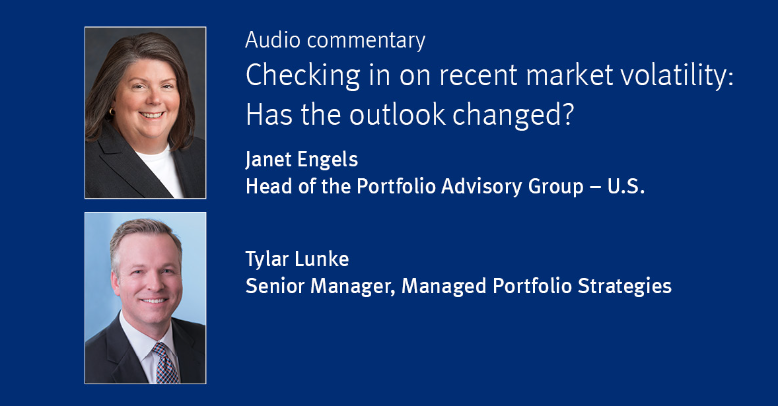 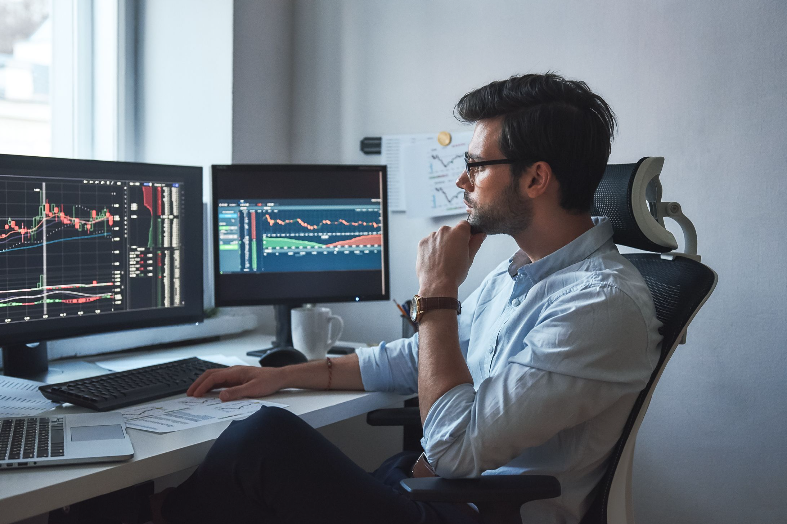 We're adding a seventh recession indicator to our scorecard. What’s new and why is it being added?