Are Treasury yields rising for all of the right reasons?

Rising yields signal robust growth as inflation fears lurk. How the Fed’s new policy framework plays out will be a fascinating experiment for markets.

The normally sleepy world of fixed income continues to keep investors on their toes through the first quarter of 2021. After opening the year below one percent, the benchmark U.S. 10-year Treasury yield has jumped to 1.75 percent, amongst the biggest three-month moves of the past 20 years. After a decade-long stretch of low inflation, expectations have turned on a dime on the back of historic stimulus with concerns that inflation may run too hot now dominating the narrative.

Not surprisingly, major moves such as these have the tendency to spook markets, but we continue to believe that this move higher in Treasury yields is happening for all of the right reasons and is simply reflective of a robust economic outlook as economists and the Federal Reserve revise growth estimates higher.

And for all of the large numbers associated with this recovery and the unprecedented nature of the global pandemic, the developments in fixed income markets in recent months are largely in line with the normal cadence we have seen in the aftermath of past recessions, suggesting to us that the good times may just be getting started. 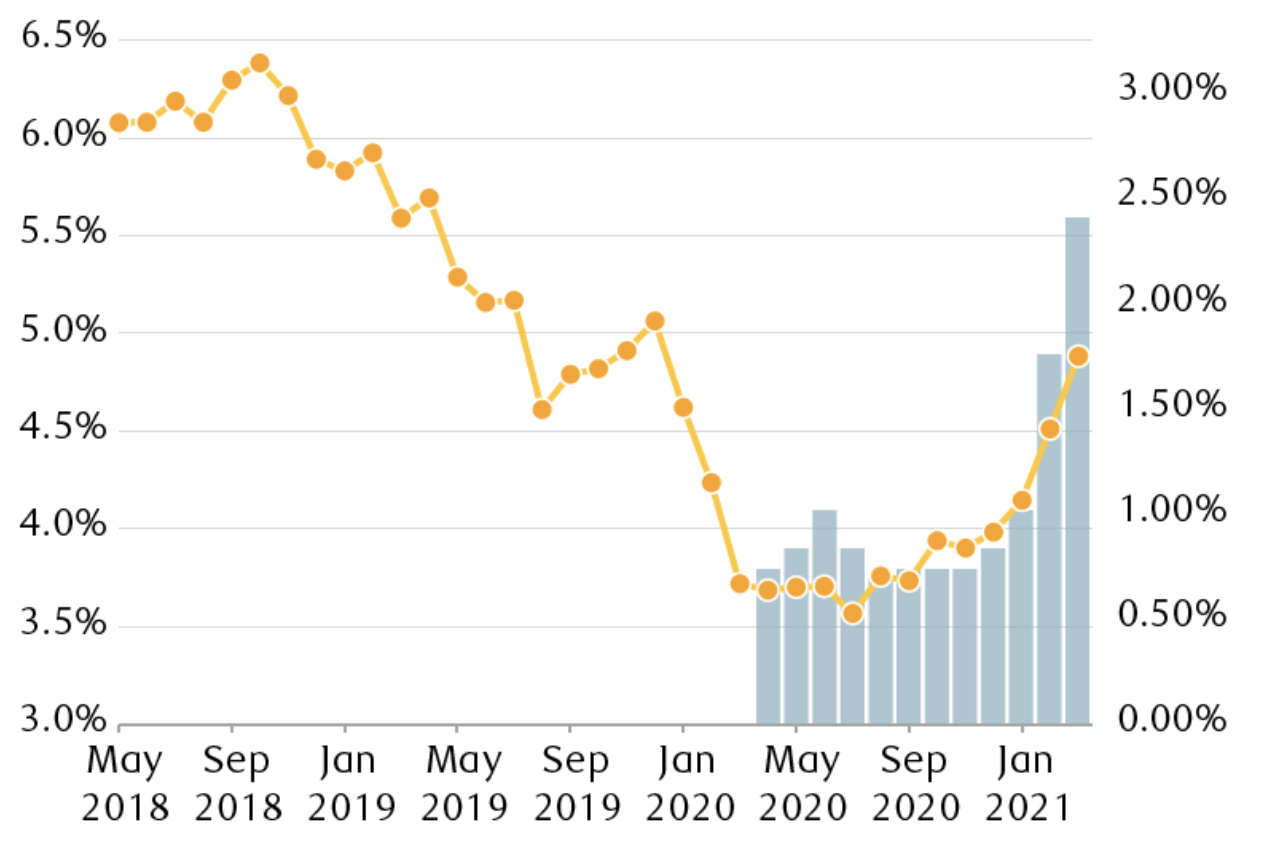 Getting back in shape

Like many of us, the Treasury yield curve is working to get back into shape following the COVID-19 pandemic. But what kind of shape should it be in when it gets back to peak condition? The experience of past recoveries may provide some clues.

There is a natural rhythm to the economy and business cycles: an expansion that leads to a peak that then turns into a recession followed by a recovery, an expansion, and then another peak. And given that Treasury yields and the shape of the yield curve largely reflect underlying economic fundamentals, they tend to follow a similar cadence.

If we remember back to 2019, the market narrative was dominated by the flattening of yield curves, and then, ultimately, the inversion in July of that year of the 2-year to 10-year Treasury curve. As the next chart shows, it has now been 20 months since the yield curve inverted, with it having subsequently steepened by 158 basis points (bps) over that stretch on a combination of the Fed cutting short-term rates back to zero percent and the recent move higher in Treasury yields at the long end of the curve.

Past recoveries provide a roadmap for the path of yields 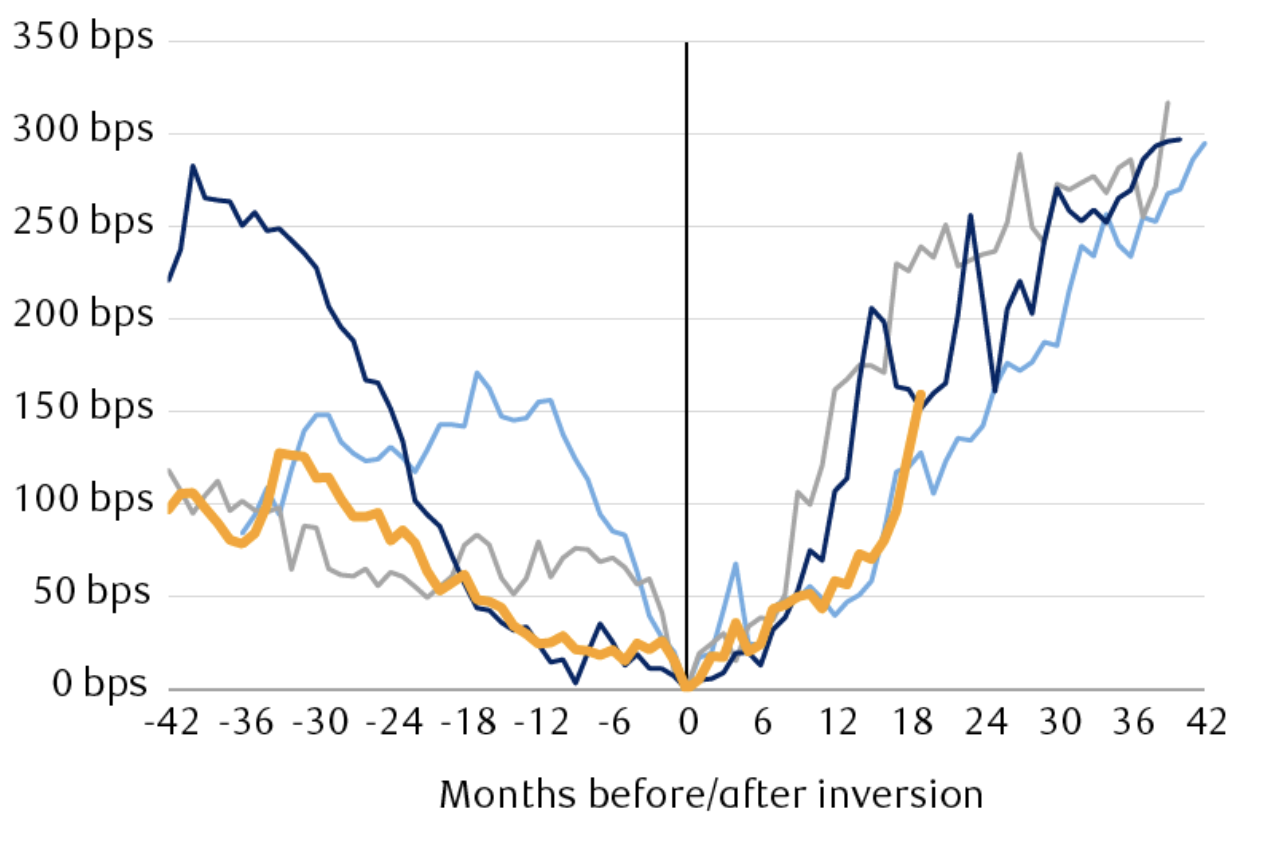 But as the chart also shows, the experience of past recoveries has been notably similar in that it takes about 40 months for the curve to reach its peak level of steepness, which also has been consistently around 250 bps–300 bps.

If we use this as a roadmap, then this resteepening is likely only halfway complete. And if we take the Fed at its word that short-term policy rates are on hold for a couple of years, which should anchor the 2-year yield around its current level of 0.15 percent, then the 10-year yield following this path over the next 20 months would suggest it has scope to rise to roughly 2.25 percent by the end of this year, and toward three percent by the end of 2022.

Finally, we think the Fed, as it has indicated, remains comfortable with rising yields and steepening curves, and that it likely won’t act to keep a lid on yields via various policy tools that it has at its disposal.

How can this not be inflationary?

While the rise in Treasury yields mostly reflects economic optimism, some of this rise has also been paired with fears that inflation risks may be headed toward getting out of control as the economy reopens and given the unprecedented fiscal and monetary policy response of the U.S. government and the Fed.

And over the near term, those fears may not be completely unfounded. Consumers have trillions of dollars in excess savings stockpiled, ready to be spent on the first available concert ticket, flight, or hotel. Despite a robust economic outlook, the Fed, on balance, still does not expect to raise rates through 2023. On top of that, the Biden administration appears set to unveil a $3 trillion economic support package focused on infrastructure.

The idea that there is more near-term inflationary pressure than long-term risks of sustained inflation can be seen across a number of metrics. Consumer expectations for inflation over the next year have jumped to 3.1 percent, the highest since 2014, whereas expected inflation over the next 5–10 years remains relatively subdued at 2.7 percent. The same dynamic can be seen in market-based expectations, 2.7 percent over the next two years, and just 2.3 percent over the next 10. As Richmond Fed President Thomas Barkin put it, “inflation is not a one-year phenomenon, it’s a multi-year phenomenon.” The Fed remains committed to looking through near-term inflation—it wants to see it sustained over a multi-year period this business cycle before tightening policy.

After falling short for years, what would it take to get inflation back on track? 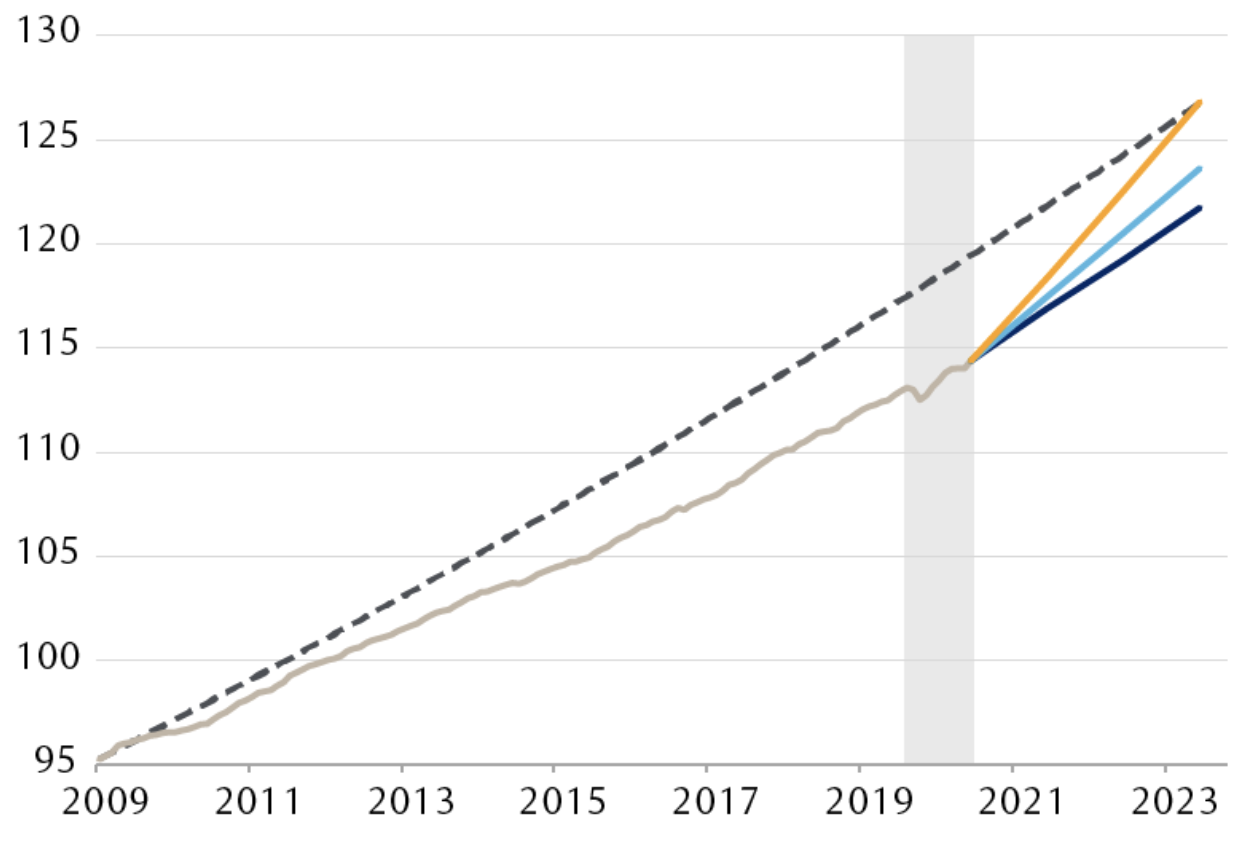 For all of the fears around inflation, it has been the lack of it over the past decade that has been the bigger problem, as the chart on the previous page shows. Much has been made about the Fed’s inability to hit its two percent inflation target in recent years, with that persistent shortfall opening up a sizeable gap between where price levels actually are and where they would have been had the Fed been more successful in achieving its “price stability” target of two percent annual inflation. Of course, this issue was addressed with its new average inflation target of two percent over a full business cycle.

But even with the Fed now forecasting slightly higher inflation, it barely makes a dent in the gap. Current market-based expectations would get prices closer to long-term trends. But it would take a number closer to 3.5 percent each year to get price levels back to the long-term trend.

To be sure, this is just a stylized example. We don’t believe the Fed has any desire to make up for all of the shortfall of the past decade. But even to make up for the shortfall over the past five years would still require an annual inflation rate of 2.5 percent over the next three years. All of which is to say that there remains a lot of work to do on the inflation front, and after years of missing targets, the Fed would likely be more than happy to reintroduce some inflation risk to the upside back into markets and the economy in order to restore its credibility on this front.

While there may be some short-term inflationary pressures, the benefit, in our view, is that the massive policy response should stoke a much faster recovery. The Fed now sees the unemployment rate falling to 3.5 percent by the end of 2023 from the February level of 6.2 percent. It took more than five years to achieve that from 2014 to 2019. A welcome tradeoff indeed at the expense of modestly higher inflation, in our view.

In the early stages of an economic recovery, we believe higher Treasury yields don’t pose any material threat to risk assets such as stocks, or to the broader economy. If there’s a risk to watch it may be that the Fed gets cold feet with respect to truly letting things run hot for a period of time, but all indications are that the Fed remains fully committed to its new policy framework.

For fixed income investors, the repricing of yields from the record lows of last year has undoubtedly impacted bond prices in portfolios. But a return to more “normal” yield levels reflective of a strong economy should also open up opportunities to add income back in.

With respect to the economic backdrop and the impact of an atypically coordinated fiscal and monetary policy response, it will, if nothing else, prove to be one fascinating experiment.

Beyond financial statements: What makes a company sustainably successful?

We discuss how ESG factors can be a driver of investment value.