There has been lots of talk and inquiries about inflation, and what is going to happen. Many of us can remember back to the early 80s when inflation rates were very high. Maybe it helps explain why I manage money for families for a living, because I can remember my Mom and Grandmother, buying Ontario Savings Bonds, as a kid, and hearing them talk about the interest rate they were getting. For real, I remember this! My Mom would get her “baby bonus”, which I believe was $50 a month per child, and she would buy these Ontario Savings Bonds (OSB). I wasn’t sure if I remembered correctly, so I looked it up: in 1981, the OSB was providing an astonishing 19.5% guaranteed 1 year return. (LINK) That folks in a nutshell is inflation.

I was given this nice analogy to help understand what inflation is: Imagine an economy where people do nothing but produce and consume oranges; each person, on average, makes one dollar a day and purchases one orange a day. On a typical day, the orange will cost around one dollar. If you hold orange production and consumption steady but put an extra dollar in everyone’s bank account, the only thing that will change is that people will bid up the price of oranges. The purchasing power of a single dollar drops as you increase its supply. That’s inflation.

While we haven’t had inflation in generations, when people worry about inflation, most often they think along these lines (this is from the 70’s, where there was another surge in inflation): 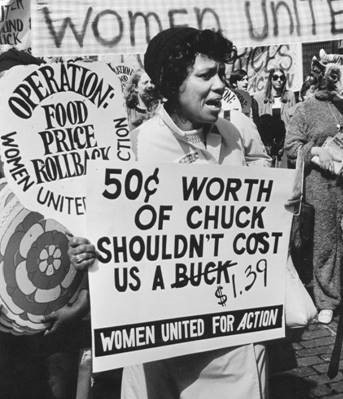 The economy is much different now from what it was in the 1970s. The US dollar floats freely and isn’t fixed to the cost of gold. That diminishes the risk of an abrupt collapse in its value with international repercussions. Adjustments happen tick by tick on traders’ computer screens almost every minute of every day. Much of the way that today’s economists think about inflation was shaped by these events from the 1970’s and early 1980’s. We also now understand the important role that psychology plays in the monetary affairs of a nation. If consumers, workers and businesses come to believe that inflation will worsen, they will bid up prices and wages in anticipation, fueling the very inflation they loathe. Central bankers now monitor inflation expectations in surveys and financial markets for evidence their credibility is intact. Long-term inflation sets in when policy makers, especially central bankers, lose the will to stop it with restrictive credit policies that come with a short-term cost in job losses or recession.

So whether this current, predictable inflation, which is a result of pent-up demand, the re-opening, manufacturing building capacity, and still not enough people returning to work, turns into a systematic inflation where I will be advising client to buy 1 year “bonds” that pay 19%, remains to be seen, there are things that we need to be mindful of when investing: many sectors benefit from rising interest rates: Financial institutions, Insurance companies, commodities, alternative real assets, or reasonable growth companies, that have good use of cash to continue to expand.

So its Father’s Day on Sunday, and for some of us, we “might” be watching the U.S. Open Golf tournament, at a venerable course in San Diego: Torrey Pines. I’m cheering for Phil Mickleson, but as a cop-out prediction, I predict he won’t win! But be nice to your Dad’s everywhere, and thoughts and best wishes to those whose Dads aren’t with us.