This week, I read that the Dow Jones composite celebrated 125 years of existence. This is one of the often cited “market indicators”

Part of the enduring success of the Dow as a measure is it simplicity: Many people aren’t aware of what the Dow actually measures. Here is what the founder, Edward Davis Jones came up with: in 1896:

That’s it: Today its now 30 stocks, their share price summed up and divided by 30.

At the time, these companies were among the titans of American industry. Of the original 12 companies, General Electric has remained in business and was the only company that retained its place on the DJIA under its original name since the index's inception for over 120 years, but was removed a few years ago. Others from this list were broken up, taken over, dissolved, or relegated to subsidiary status over the years. FUN FACT: Procter & Gamble Co. which was added in 1932, is the current component with the longest continuous tenure.

Of course, buying and holding forever doesn’t work: the Dow, just as any good portfolio isn’t static: Stocks that have come and gone over the years include Eastman Kodak Co., Sears, Roebuck & Co., Woolworth and Studebaker. At one point all of these were iconic brands.

Today, if you look at the now 30 stocks in the Dow, it’s representative of an entirely new genre of companies where production is much less important than service and technology. The index still has industrial firms like 3M Co. and Boeing Co. But these days it also includes financials such as JPMorgan Chase & Co., consumer companies like Coca-Cola Co. and Walmart Inc. and Apple Inc. and Microsoft Corp. The Dow got its most recent makeover last August, when Salesforce.com Inc., Amgen Inc. and Honeywell International Inc. replaced Exxon Mobil Corp. , Pfizer Inc. and Raytheon Technologies Corp. 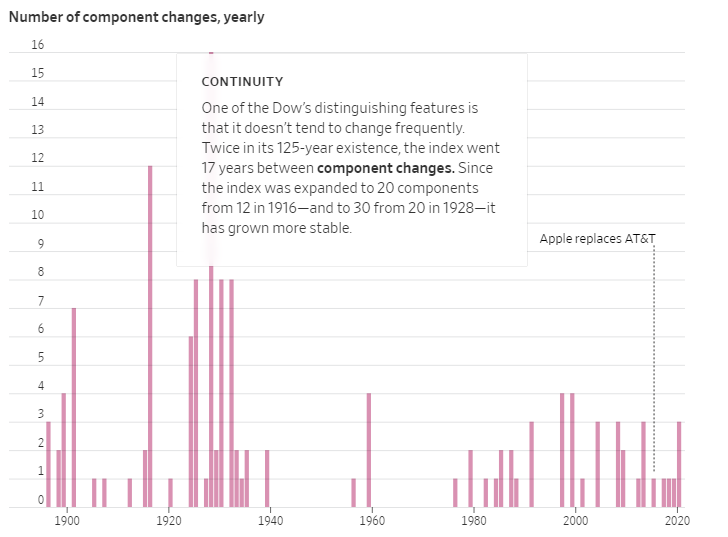 I am going to make a home-grown prediction this week. The Toronto Blue Jays, the only Canadian team in Baseball, who have played home games this year in Florida, and currently Buffalo, will be moving back to Toronto in August. Yours truly has season tickets, and will be inviting select readers to attend games at that point. We can watch them as they make another playoff appearance!