I’ve wrote in the past about the increasing focus of many firms and their investment strategies, as well as a newer generation of investors are increasingly focused on how they manage climate risk. Of increasingly importance are the efforts that many are insisting on, when it comes to diversity efforts at the Board level of companies, and investment funds. As a Canadian, it was noted with interest that Berkshire has announced that a Canadian, Edmontonian Greg Abel will be the future CEO of Buffet’s $600 billion company (LINK). But hiring a Canuck to run an American conglomerate doesn’t really count as diversity!

Blackrock, a publicly traded company, that manages an astonishing 15 times more money than Berkshire ($9 trillion of assets under management), has said in the past that it would wield votes it controls for investors more aggressively following criticism that it defers too often to company executives. In recent months it signaled it is more willing to support shareholder-led proposals on environmental, social and governance issues.

Some might feel that it is beyond the purview of institutions to be imposing their agenda or beliefs on corporations. But the way Blackrock frames the issue is a sign of the times, and did garner around 25% of the votes last week when casting their votes at the Berkshire Annual Meeting: “The company is not adapting to a world where environmental, social, governance (ESG) considerations are becoming much more material to performance.” So Blackrock (and many others), don’t see environmental and green considerations, or a more representative board constituency as part of a “woke” agenda. They argue this effects the bottom line.

I really like this chart below. Younger investors place a much higher importance on ESG investing than older investors. 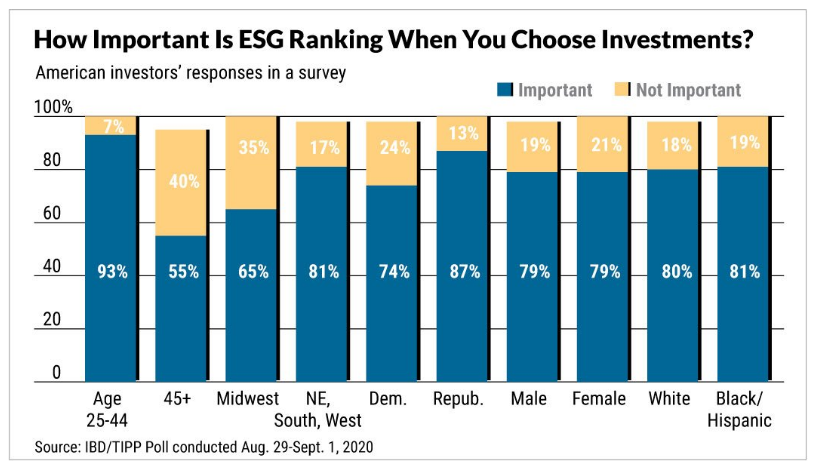 This weekend, the iconic Saturday Night Live Comedy Show, will have a CEO of a publicly traded company hosting. This has never happened before. Elon Musk (another Canadian), whose company surely would not be as valued as it is today, if not for the importance the Tesla, and its consumer, places on ESG (not to mention the support of its stock by younger investors), is the Host of SNL. I have no doubt that over the weekend, and into next week, downloads of his sketches from the show will be massive. I predict there will be sketches about Elon being from an alternate universe, Dogecoin, narcotic use, and a next generation Iron Man: apparently it’s not too late to send him ideas: (LINK). Again, definitely a sign of the times we live, and invest in.

Of course, this weekend is Mother’s Day: surely I’m not going to have to make a prediction that some Father’s and Children will be doing a last minute dash to buy Flowers or prepare something important for the most important women in our lives: we are all on top of it this year: Happy Mother’s Day!