Everyone has heard of the term “bottleneck”. This week, we are witnessing the Mother of all Bottlenecks: It’s almost comical to look at, and think that by simple human error, by a driver who couldn’t steer so well could cause such a massive disruption. 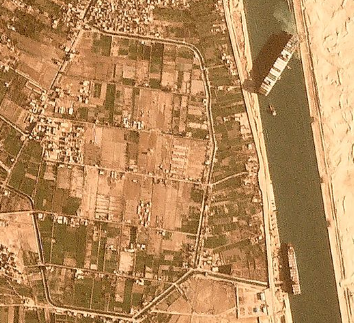 Amazing that in today’s world, this Canal is still responsible for more than 10% of the daily Oil trade flows through this Canal. It is estimated that about 3% of global oil consumption is currently stuck in this Oil Traffic jam (LINK).

I’ve talked in the past about Debt levels of governments. One of the things that really hasn’t been considered or fully explored is the reduced capacity for countries to act in the future when another recession or crisis inevitably emerges. Governments everywhere are largely funding these massive expenditures via new debt. Why isn’t there for now much worry about this?

For an individual or household, typically, being heavily indebted is an unenviable position: an increasing debt burden presents a financial risk as people have a finite number of working years available to pay off their liabilities.

But, governments don’t ever retire. Rather, they have an unlimited period with which they can try to reduce their debt load, as well as the ability to always increase their “income” by increasing taxes. The simplest way is through economic growth that could lower a country’s debt-to-GDP ratio. Another approach would be to generate inflation, which effectively reduces the principal amount of outstanding loans. Two additional measures include an increase in taxes and a decrease in spending: we are all but assured higher taxes, and all but assured no reduction in government spending: that’s what they do: spend our money, always.

Nevertheless, there are plausible scenarios in which governments can see their debt levels fall over time. With a growth outlook that is set to expand over the next few years, the debt levels may modestly improve over the near term horizon. But, it will take considerable time and a sustainable economic trajectory to see more meaningful progress.

In the meantime, the low interest rate environment has made the debt burdens relatively affordable for most governments. Perhaps surprisingly, the total servicing costs for some countries is set to decline over the next few years despite meaningfully higher debt; a function of countries being able to refinance maturing loans at much lower interest rates.

Taking it back to the individual or household, this same principle applies to the relationship between the prices of houses and mortgage rates: many people ask me: “the price of homes is absurd”. Well just like the government, who can afford high debt because of low rates, so too can individuals borrow more, which increases home prices. As long as the home prices continue to go up over time, and owners pay down their mortgage over time, their wealth will grow in value.

This week, a more Global sports prediction. On my bucket list is to attend the “Crucible” (LINK). A clue into part of my misspent youth, I’ve always liked pool/billiards/snooker: the World Snooker Championships is held annually at the Crucible Theatre in Sheffield England. This year Ronnie “Rocket” O’Sullivan will be victorious.