Not that it is a competition per se, in terms of vaccinations, but this graph is interesting, and also startling if you live in Canada. Globally, it is estimated that over 275 million doses have been administered (with a global population approaching 8 billion people). The U.S. is now up to 2 million vaccinations per day. I like this graph because it shows it as a % basis, as well as total doses.

There’s no way to parse it: Canada, to date, has done a very poor job. I couldn’t cut and paste enough to get them to fit onto the page! Canada sits much further down: 5.6 doses per 100, and 2.1MM doses in total.

Interestingly, Canada still higher on a percentage basis than China, who is at 4% (but 53 MM total doses), and seems to have the things relatively contained in their big urban centres. 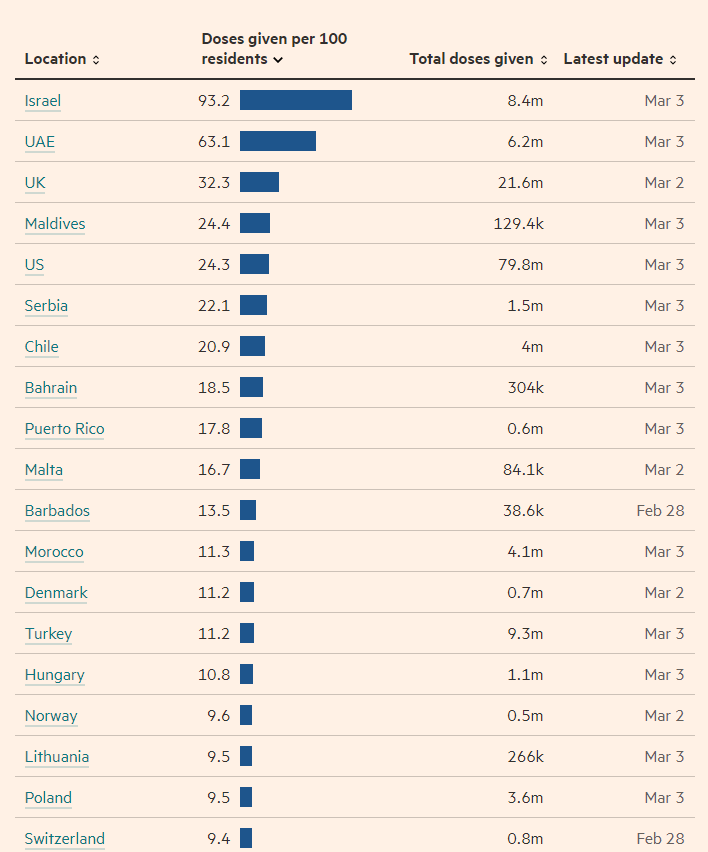 There is a good interactive tool for anyone interested in looking at the numbers in more detail: (LINK)

If there is a silver lining: there is no doubt that at some point in the future, all Canadians will be vaccinated. We just need to catch-up, and the trend across the world is encouraging.

I’ve talked about the concept of another “Roaring 20’s” before. So I thought’ I’d share more on why I believe this to be the even more so the likely outcome. To be sure, the wealthier you are, the better off on a relative and absolute basis this time has been. Those fortunate enough to own a home, or other property, or own equities, have seen their net worth go up. In most professional and corporate environments, the work at home has been seamless. Residential building is still booming. But it hasn’t been an even distribution. Canada lost one-fifth of all its low-end jobs in 2020, the number of high-wage jobs rose by 10%. At the same time, Canada’s households have run up an all-time record high cash pile, about $100 billion more in savings than they otherwise would have had.

Part of the government strategy is counting on citizens (and companies) to ignite a strong recovery by spending that money when it’s safe to do so. There is a nice symmetry to this: For those service-sector workers and small businesses who’ve been hit hardest by the pandemic, that giant cash hoard among higher earners holds a silver lining: When the pandemic ends, a good chunk of that money will go straight back into those parts of the economy that got hit hardest in the first place.

Last week, I should have made some predictions on the Golden Globes: for anyone who watched it, or saw clips it really was a strange affair: dealing with the same issues that we all have to: choppy connections, lags, multi-camera remote meetings. It was strange to see a less “polished” Hollywood production. As a Movie Buff, I often wonder when we will be going back into a movie theatre to see something: I do predict it will happen in 2021, and I will let you know which film I saw first!