Recall last week, I said that the “market” isn’t a proxy for the economy (Link), but I came across a graph that I thought I’d share.

With Biden's inauguration, let's look back at the performance of the U.S. market under different Presidents. Trump certainly was very vocal and attuned to the stock market, probably more so than any president ever. When it was convenient, he would often tout the stock market as a proxy for how well his administration was doing. U.S. stock markets hit record highs during President Trump's time in office, but mostly underperformed his predecessors: 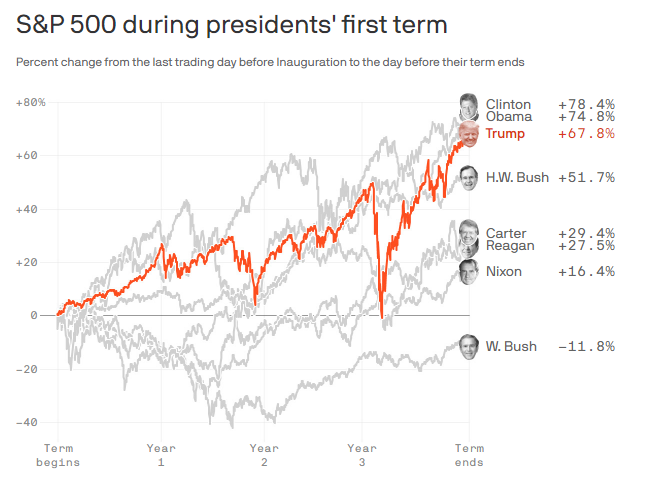 Like investing itself, timing matters over a shorter term, like four years, and of course, the market, as we know, isn’t the same as the economy. There are significant outside influences beyond the control of a President that significantly affect the market; as much as some might like to believe that the President's orientation and their “friendliness” to the market matter, history and facts don’t support this.

Obama, for instance, inherited a financial crisis, where significant financial firms went bankrupt. Obama's stock returns were significantly aided by the S&P's massive 40% fall in 2008 that pushed the Fed to drop interest rates to near 0%: so this inflates his “returns,” so his timing was lucky. Clinton's stock market gains were powered by an easing interest rate cycle globally (generally, as rates go lower, the stock market goes higher) while at the same time increasing personal and corporate taxes.

If you want to dig into the market over a long-period of Presidents, see below. Red is Republican, Blue Democrats, which for me, I still have trouble getting why this colour (Canadian spelling intentional!) convention is the opposite of here in Canada: 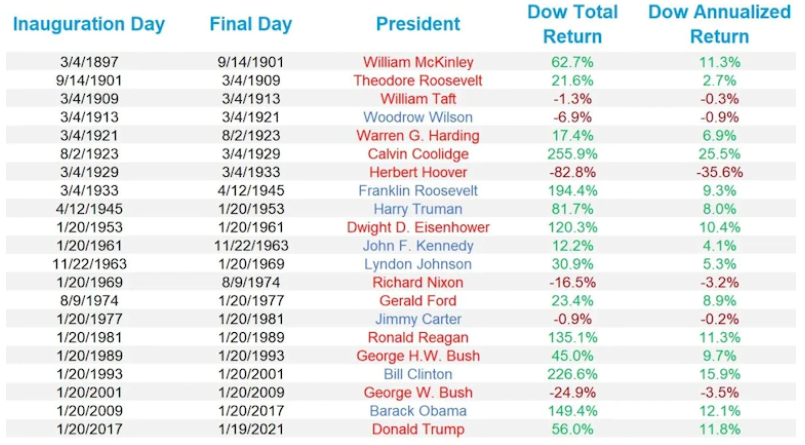 When people ask me if Biden will be better or worse for the market, I think history is pretty straightforward: the President is ultimately: a “price-taker,” not a “price maker.” Undoubtedly, corporate taxes will eventually rise, but how the market does under his administration has to do a lot more with things that he cannot control.

Last little bit on Biden, I thought this was a fair reflection of the times we live in. As a Peloton owner myself, I found this funny that Biden, an avid Peloton rider, which reportedly starts each day with a workout on his exercise bike, grapples with the cyber-security threat posed by the streaming of live classes into the Whitehouse (Link).