I trust everyone had a good few weeks off, but hopefully, you missed my weekly takes: I don’t think much happened in the news, did it?

So I warn you, after a few weeks off, I’ve got a more robust one to kick off with

Without a doubt, the single biggest question I have been asked in the last 9 months has been: “Why is the stock market doing so well while the economy is tanking?”

It might seem counter-intuitive: how markets could stage a rally during a devastating pandemic when tens of millions of jobs have disappeared. Let us look at what drives the market vs the economy to appreciate the disparity:

The “stock market”: Most people follow the headlines of the stock market in reference to an index (this isn’t the market, by the way, but that’s another article), such as the S&P 500. This widely represented index is comprised of 500 large companies that trade on U.S. exchanges. Many of these companies operate globally, including Apple, Microsoft, Tesla, Wal-mart, Starbucks and Amazon. Not to be too technical, but the “market” is simply the reflection of the consensus view about the health and future earnings potential of publicly traded companies.

The “economy”: Captures how money is made and spent. For a country, this is represented by its consumers, corporations, financial institutions, and governments' aggregate activities. The economy is widely measured and tracked through changes in Gross Domestic Product (GDP) within the headlines.

The reality is the stock market and the economy is rarely in synch:

This graph shows that while the “economy” grows at a fairly steady rate over time, the stock market returns certainly don’t “match” the economy. The market’s returns can be a lot higher or lower than the economy. This time is no different. 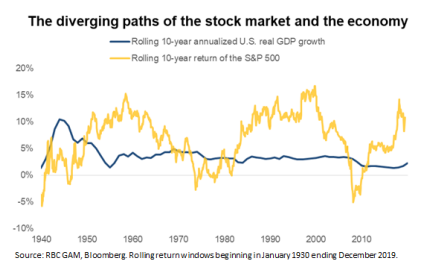 As investors gauge the future earnings potential of publicly traded companies, they are influenced by the broader environment – with the latest economic developments being just one factor they consider. As a result, as per the graph I just showed, there has never been a consistent relationship between the stock market over time and the economy at the moment.

Particularly in the short term, the stock market is often seen as a leading indicator for the economy. Investors often look toward the future and may begin to discount potential risks while focusing on growth opportunities. As a result, the moderate and steady pace of the economy is often at odds with the stock market's abrupt movements.

Here are some of the things that I share when asked about the market vs the economy:

IF YOUR EYES HAVE GLOSSED OVER THIS, ALL YOU NEED TO KNOW ABOUT WHAT I SAID ABOVE IS THAT THE ECONOMY AND THE MARKET MEASURE DIFFERENT THINGS, SO ITS NOT ACTUALLY A SURPRISE THAT THEY ARE NOT ALWAYS IN SYNCH

Speaking of not being in synch, It seems strange to have hockey teams playing, getting paid millions, flying city to city while many across North America are again in lock-down. But I would be remiss if I didn’t’ come out and predict that the Edmonton Oilers will win this year's Stanley Cup.