How many of us have been to see a movie lately?

Many of you, I’m sure, used to love going to a film: I’d even sneak out in the afternoon on occasion (rarely, don’t worry!) from the office to catch something when things were slow at a great small independent movie theatre around the corner from the office on Front Street.

It is estimated that over 85% of North Americans haven’t been to a movie theatre since before March. So it shouldn’t come as a surprise, but it still was shocking to read that Warner Media announced that ALL of their blockbuster movies are going to be released in 2021 both in theatres (if any are open), and on their streaming platforms, at the same time: (LINK). It’s interesting because this isn’t a selective group, but every title: the big-budget Wonder Women, Matrix 4, etc.

It’s them I’ve talked about a lot in the past months: how things have changed as a result of the Pandemic and how some things aren’t likely to go back to business as usual in some cases.

Think of movie distribution as an example: Movie companies used to distribute their movies to a limited number of buyers: the movie theatre chains, and then share the profit with the chains. Today, companies like Warner Media (who are owned by AT&T, who also happen to own HBO) are figuring out that they can distribute their content in-house. Now the Movie theatres, which make their money selling Popcorn and Pop for massive profits, certainly lose out.

We can be sure that if they can sell their films on a “digital rental” basis to us for $20, keep all $20 for themselves, and still sell in sufficiently large quantities. They will increasingly move towards pushing their product through their own companies and not have to deal with the middle man.

How many other industries have been forced by the current environment to change how they deliver services and goods?

Here is just one example, Bank Branches: I am sure every financial institution in North America would reduce their bank branch footprint if they could retain their customer base and migrate them increasingly online. There has been a little movement away from this to date, as there are still almost 6,000 bank branches across Canada: 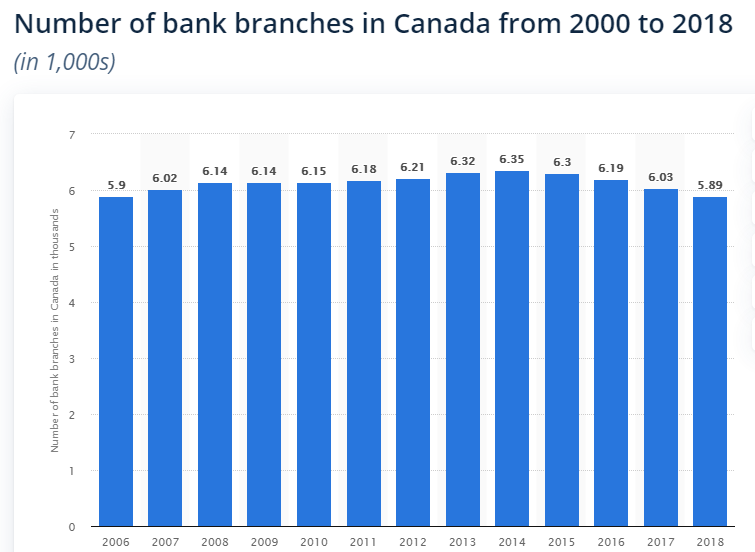 So linking this back to the movie industry: I was surprised to learn that Canada has 2,687 cinema screens in operation.

An easy prediction for this week: I predict that more North Americans will watch new release movies at home in 2021 than in the theatre, and in 10 years, we will look back and be amazed that the footprint of Bank Branches and Movie theatres was so high. For them, though, I will still be hunting out movie theatres in 10 years: going into bank branches for transactions; however: not so much!