I came across an interesting table this week. Below are the most “profitable” investments, if held on Jan. 1, 2010, until today: 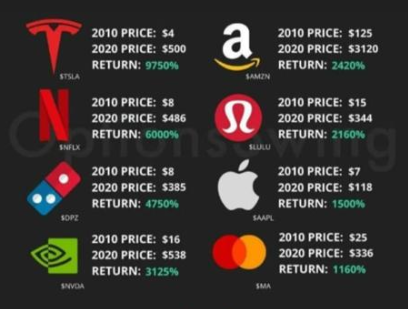 It’s a fascinating mix of companies. Going through them individually, this is what the “consensus” thought would have been on each of them in 2010:

We all wish we had the foresight to buy these stocks and keep them. But there are a few takeaways from this rear view exercise.

While not an exact comparison, note that the two tech companies, Apple and Microsoft from 2010, appear on the 2020 list: 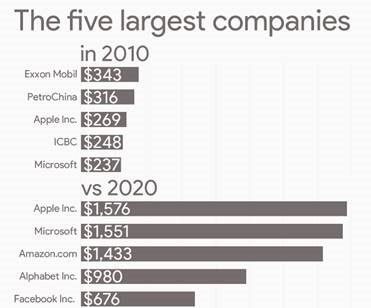 If there is one takeaway from this: we all tend to get caught up in the day-to-day stock news as it relates to their short-term performance. Having a much longer time horizon and the discipline to differentiate between short term glitches and longer-term secular trends are so critical.

It’s US Thanksgiving, and we wish our neighbours to the South good and happy times and think about those who have families and friends who aren’t able to celebrate together this year. US Thanksgiving also now encompasses Black Friday and Cyber-Monday online shopping. It’s hard to believe that Cyber-Monday was invented way back in 2005: (Link) “Cyber-space” was the term we used to use for the internet “thingy”: seems so quaint. I predict we will look back at this year as a watershed moment for online convergence: the convergence of technologies and our current.