This is a big week coming up. I’m not talking about Halloween, Daylight savings time, or the Blue Moon (more on that later). Of course, Tuesday, November 3rd, is the U.S. Election. By this time next week, we surely ought to know who will be the next President of the U.S.

No outcome can be ruled out, nor should we be surprised (after all, anything can happen once in a Blue Moon!). Below, I found this chart interesting. In 2016, I did not have one conversation in the days leading up to the election with anyone predicting that Trump would prevail. In 2020, while seemingly further behind in the polls than he was 4 years ago, the “betting odds” for Trump are much higher. I’m not sure what that tells us. 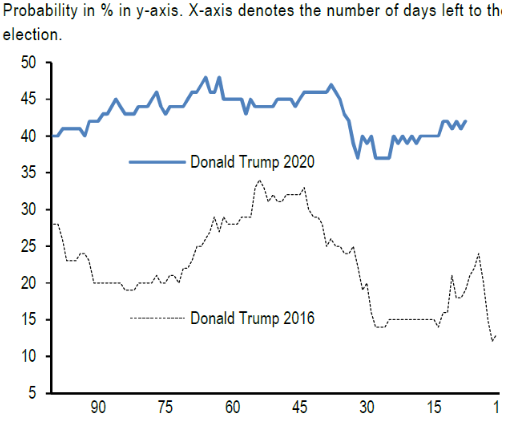 As for predicting the stock returns from election day to the end of the year: history favours positive returns, regardless of which party prevails. In 16 of the last 23 elections (70%), there have been positive returns. This makes sense, as the market (and the underlying companies) prefer certainty, and once the result of the election is known, we are all able to move onto other considerations.

The big caveat is that in the 7 negative return periods, 4 of them were associated with recessions (including 2000 and 2008). Again, this, too, makes sense: recessions last a long time, and there is very little a sitting or President in waiting can do to change a recession in short order. 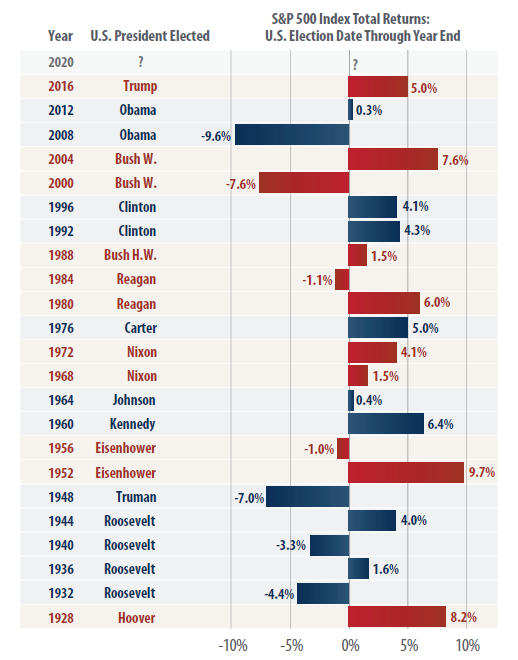 Back to the Blue Moon. This an unusual election occurring after the end of an unusual month. This Halloween Saturday happens during a full moon, the second full moon of the month, hence a “Blue Moon (Link).” Fresh off my accurate L.A. Dodgers World Series prediction: This Halloween Blue Moon portend a Blue Wave in the U.S. election.