That’s why the recently reported news of the softness in condo prices in Toronto is so interesting. If you’re looking to buy a condo in Toronto these days (or rent one), you’ll be glad to hear you will have more to choose from than ever had before.

Many investor-owners of condos have seen the value of their investments drop in recent months. This is the result of at least six factors:

The number of condos now for sale in Toronto is the highest number ever recorded. This doesn’t include newly-built condos, set to hit the market in record numbers over the next few years. It is estimated that over 80,000 condo units are under construction over the past year.

I found the following statistic amazing: “Toronto had more cranes in the sky in the third quarter of this year than New York, L.A., Chicago and San Francisco combined. There were 124 cranes in Toronto, compared to 12 in New York, 41 in Los Angeles and 43 in Seattle. For those of us familiar with Toronto, this landscape photo is just the normal right now: 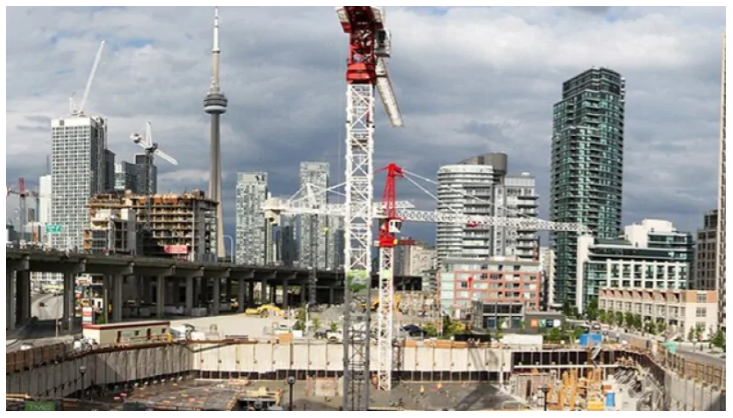 Condos, though, are most often used and viewed differently than single-homes. Their owners occupy most single-unit homes. While some people own and occupy their Condo, the majority of Condos in Toronto have long been used as an investment vehicle: collecting rent and enjoying the appreciation of their units. But if a Condo investment consistently provides a “negative yield” (meaning the rent doesn’t cover your mortgage, property and condo fees), and the price appreciation isn’t there, this puts pressure on those owners.

As the home has been the workplace for so many (as well as our Kids’ schools, our gym, our restaurant, and park, etc.), personal space is more important than ever. The tight supply ― combined with pent-up demand from the lockdowns and record-low interest rates ― has sent house prices soaring, with the average resale price of a home in Canada up 17.5 percent from a year ago.

So think of the overall real estate market like the stock market. There are definite winners and losers as a result of these shifts in the economy. Condos prices and house prices are behaving, like stocks in different sectors might. To the extent that the fundamentals of stock don’t look promising, and the expectation is that things will get worse before they get better, that companies share price ought to go down. While a growing company, with strong prospects and outlook, ought to go higher. It’s the same dynamic taking place right now in the Condo market vs the single home market.

The World Series of Baseball has started. Amazingly, the league was able to adapt and play a season. By the time next week’s post is up, the L.A. Dodgers will be crowned the Champions!

Have a great weekend