Trying to figure out what will happen with all the debt accumulated due to the massive aid and stimulus packages from governments around the world in response to the COVID-19 recession is something that we all need to consider. We don’t know with any certainty what the future holds, but I’d suggest that any “disaster” that might occur as a result of this level of debt isn’t coming anytime soon. The reason for this comfort is that while the debts have risen massively, the cost to carry this debt has gone down considerably. As long as inflation remains modest and central banks continue to issue more and more “paper,” the fiscal deficits and debt seem unlikely to become a problem for the foreseeable future.

Net interest payments used to be a considerable burden on the U.S. economy by way of example. But given this low rate environment, it is expected to be only 1% of GDP over the span of the next couple of years: this would be the lowest level in six decades. 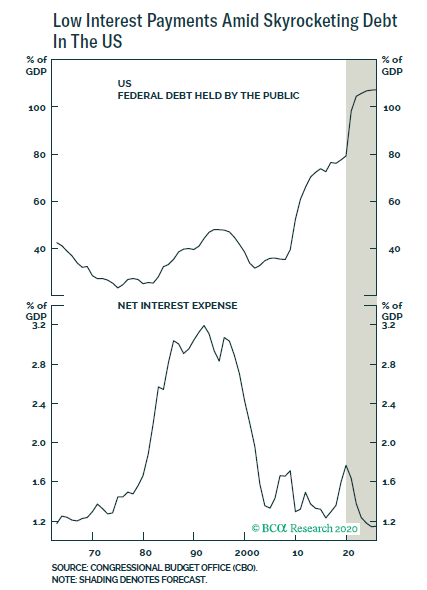 As difficult as it is to fathom, In Japan, the government now earns more interest than it pays because two-thirds of all Japanese debt bears negative yields. Think about that for a second: Japan issues debt, and rather than having to pay interest, the holders give them money!: 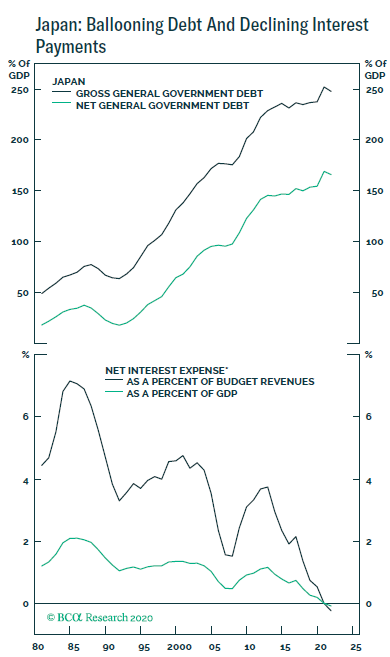 One might reply: “well, that’s in Japan; it would never happen here.” This is a direct quote from Tiff Macklem, the Bank of Canada governor, just last week: “We’re not actively discussing negative interest rates at his point, but it’s in the toolkit, and never say never.” It’s a remarkable world we are in. This direction towards this low-interest-rate environment for what is likely a generation has implications on what sectors and assets one should be investing in. A five-year GIC currently offers at best a 1.75 – 2% return (Link). GIC’s were traditionally used as a safe and steady source of income.

If there is one take-away from my weekly post, it is to understand that what is happening due to the environment we are indirectly impacting the investment choices we will have to make in the future.

But there is still hope for Halloween in a few weeks. While there still isn’t a clear mandate on what is and isn’t going to be permissible, I did come across this ingenious method of contactless Trick or Treating (Link).