I have many clients who are "snowbirds": spending anywhere from three to six months in warmer climates. It's estimated that 350,000 Canadians spend 3-6 months in Florida, and another 150,000 spend 3-6 months elsewhere in the U.S., Mexico or overseas.

The consensus appears to be that most of them at this stage are not planning their annual exodus. While the Canada-US border is closed to "non-essential" travel until at least October 21st (and expected to be extended until at least November), many would be surprised to realize that Canadian air passengers can still enter the U.S. country as long as they haven't visited Brazil, China, Iran, Ireland, the U.K. for 14 days. In many states, Canadians do not have to self-isolate upon arrival. It is only a "recommended" quarantine for international travellers. While flying to the U.S. is permitted, they do not allow Canadians to drive to the U.S. for leisure travel (this seems like a weird loop-hole). This land restriction makes it difficult for many Canadians who typically go to their vacation destinations in the U.S.

Canada, on the other hand, continues to prohibit U.S. "non-essential" visitors, except those with immediate family. Between March and September, the Canada Border has reported its turned away more than 18,000 travellers from the U.S. at land, air and sea borders.

So while this perhaps misunderstood travel restrictions (or lack thereof), is often cited as a reason for not travelling, there are two other significant reasons for most likely resigned to braving a Canadian winter.

First, of course, is the reality of the relative amount of cases of COVID-19. The State of Florida (where recall 350,000 Canadians go every winter), reported 1,700 new cases on Monday, bringing their overall total to over 685,000 cases, across a population of approximately 21 million. All of Canada, with a population of 38 million, has a total of 145,000 cases spread out across the country since the pandemic began. So it makes sense for many, who are also a higher risk cohort, to be cautious and apprehensive about going to Florida. The perception is that too many people are not taking it seriously, and it's as much a politicized situation as it is a health and/or safety consideration.

The second factor that puts a pause to many is specific COVID-19 medical coverage. While this, too, is a legitimate concern, there appear to be some insurance companies that are now providing coverage for this. As part of the coverage of their travel insurance, to cite one example, Medipac, a service with ties to the Canadian Snowbirds Association, offers four months of coverage for less than $900, depending on the customer's age and general health. Manulife announced a similar service last week. The airlines are now providing insurance providing medical coverage for COVID-19, and in the event, a trip is cancelled or interrupted. Despite some of these insurance coverage improvements, it is a legitimate concern.

In the U.S., of course, the election is fast approaching (regardless of where our snowbirds maybe). I did want to share an interesting chart. One of the reservations that many have about the U.S. election is the vastly different tax solutions provided by the two parties. One refrain often heard is that Biden will raise taxes, and this will hurt the market considerably. History, however, shows that S&P 500 returns during years with tax increases have been higher and more positive. 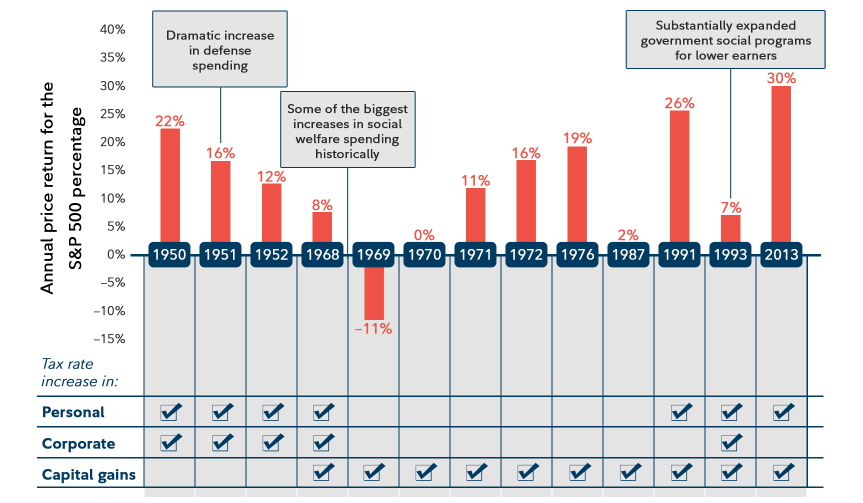 The critical point in this is that the stock market generally sees past tax increases. Macro variables such as GDP growth, fiscal and monetary policy settings, inflation, bond yields, corporate profit trends, valuations have historically overwhelmed the influence of tax increases. It's perhaps not the most exciting thing to mention at a dinner party. But for all the snowbirds who are now stuck here this winter, you may impress your friends if you point out that in the 13 previous instances of tax increases since 1950, the S&P 500 has shown higher average returns.

So sympathy for our friends and family that are likely going to be forced to spend their winter in the Great White North. For many, it will therefore be a tough winter. And the health benefits of being South are significant: we should all have a lot of empathy for them. I predict a lot of muttering under their breath about how cold our godforsaken country is in the winter. They will certainly not look back fondly on their winter away from warm. They certainly aren't going to like this prediction from the Farmer's Almanac, where snowier-than-normal conditions are forecast for most parts of Canada.