In the context of the near-term market, conversations have recently been turning towards: “who do you think will win the U.S. election”? As a follow-up question, it’s invariably: “what will happen to the markets if Biden wins vs if Trump wins” Over the next few months, leading up to the election, I am going to examine in more detail these questions.

As we explore the election scenarios and possible outcomes, I want to share some impressive numbers. In the U.S., Millennials now represent the single largest voting bloc in the U.S. Collectively, the under-40: millennials and Generation Z are close to 100 million or 40% of the total U.S. voting population of approximately 260 million. The flip-side to this, of course, is this under-40 crowd cohort historically has the lowest voter-attendance. The connection between this voting group and the eventual president, who will be 74 or 78 at their inauguration, might not be the catalyst to get the young to come out and vote. 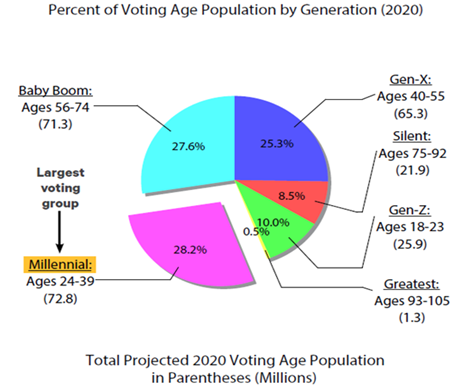 For better or worse, Millennials and Gen Z are not as particularly fond of capitalism as a whole as the generations before them. Perhaps this is partly explained by the deep recessions they have faced, without the corresponding prolonged boom times of the economies that Baby-Boomers grew up in. The appeal of a Bernie Saunders and his messages of rising income and wealth inequality attracted a vast amount of young voters: a seemingly curious alliance between a now 79-year-old “silent generation” career politician and his mostly millennial partisans. Indeed, these younger generations are also collectively more tied via social networks and on-line groupings than any previous generations.

Perhaps this isn’t this election that these generations come out and vote in the proportions that they ought to. There is no doubt, however, that should these younger voters continue to favour political platforms with policies geared toward addressing social, income and wealth inequality, as well as a bonafide interest in the environment, this could mark a change in policies and political posturing.

Winston Churchill famously remarked: “If you are not a liberal at twenty, you have no heart. If you are not a conservative at forty, you have no brain.” Now Generation Z, like all young generations, ought to vote with their heart when they are young, and hopefully, they will prosper to vote with their wallet as they progress eventually. As always, one's opinion towards capitalism depends on how much “capital” one has to lose (or doesn’t have):. 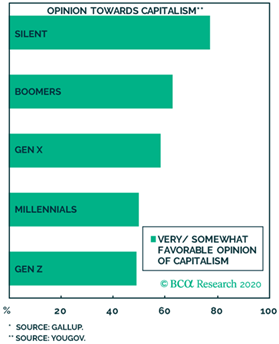 Regardless of the winner of the election, the U.S. will have to face a new reality: Government debt as a percent of the economy will likely exceed the Second World War peak (which was way back when Trump and Biden were born!), for decades. In order to the U.S. to bring federal debt back to pre-virus levels in 10 years, they would have to see the largest tax hikes along with the largest government spending cuts ever: The Republicans ran the largest deficits in U.S. history at a time of some of the lowest unemployment rates ever. Biden wants to increase spending, while increasing taxes. So neither party can credibly claim to be going to focus on the debt.

I’m sending this off before the big basketball game tonight: the Toronto Raptors are going to run away with an easy victory of the Celtics on Friday: a great start to the weekend.