Less than ten years ago, none of Amazon, Apple or Disney were providing online content. Netflix only began providing online streaming in 2007. Now, these four companies have a combined subscriber base of over 500 million consumers, all paying monthly

I have talked before about the importance of television contracts for the economics of sports. With so much of the workforce at home, fear of public spaces, an inability to enjoy live events, it’s not surprising that households are increasingly relying on home entertainment as a means of passing the time and leisure. It’s estimated that streaming videos from services including Netflix, YouTube, Hulu and Amazon Prime Video have more than doubled from where it was a year ago.

I’m not sure about everyone else, but I no longer have “cable” as part of my bundle at home. Cord-cutting has hit a milestone during the pandemic with nearly 1 in 3 U.S. TV households without traditional pay-TV subscriptions (cable, satellite, telco), while another 25% of households identified as cord shavers that have cut back their service.

The last many months has allowed households to reassess their home entertainment experience. What they are willing to pay for it: this has rapidly increased the shift to streaming. While the absence of live sports events on traditional cable networks no doubt facilitated the acceleration in cord-cutting and rise in streaming services, the question remains as to whether cord-cutters would re-subscribe to traditional pay-TV when live sports returns. (Don’t tell anyone, but there are also many “free” websites that stream without interruption, all live sports, movies and television shows).

In 2019, major cable and satellite TV operators collectively lost around 5.8 million subscribers, more than double what was lost in 2018, in the U.S. The trend is the same in Canada. Incredibly, the average U.S. consumer pays more for their cable package than they do for most other utilities combined– an average monthly cost of $217.42 for their “bundle,” of which approximately $100 of this is cable.

Most households that cut the cord can tend to redirect those savings towards multiple streaming subscriptions. Even if a family were to sign up for subscriptions to Netflix, Amazon Prime Video, Disney+ and AppleTV+, they would still be saving 60%. 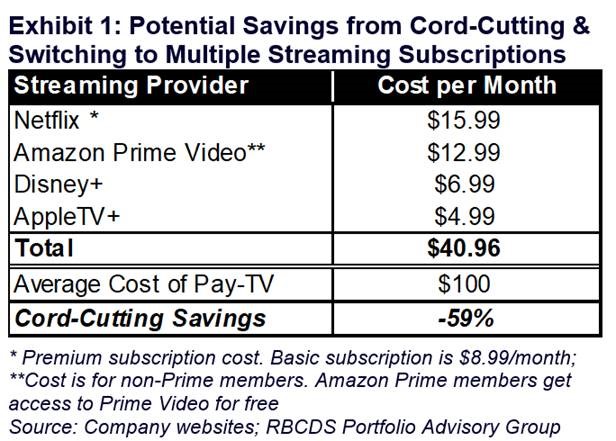 This is a trend that will continue for many more years. While the focus on value as a driving force of cord-cutting cannot be understated, other factors will magnify this trend. Technological advances related to improved network speed will enable video-on-demand service providers to deliver high-definition videos at even faster streaming rates. These quicker speeds, coupled with more and more connected devices, will continue to grow all of the online, non-traditional ways of watching and paying for content.

Less than ten years ago, none of Amazon, Apple or Disney were providing online content. Netflix only began providing online streaming in 2007. Now, these four companies have a combined subscriber base of over 500 million consumers, all paying monthly fees to watch content on their platforms. As investors, we can’t ignore these changes, and we all need to be aware that these trends are only still beginning.

This week, I will leave you with the following. Jeff Bezos, the founder of Amazon (a company that does a lot more than streaming to be sure), his shares are now worth almost 200 billion dollars. This weekend, if you are buying lottery tickets, here’s some context. This man won the largest lottery ever in Canada: $70 million. He would need to win two such lotteries per week, every week of the year, for the next 33 years, to have roughly what Bezos has today, in U.S. dollars. I predict that this weekend, no one who reads this article will win the lottery (but if you do, call me!)