As the summer moves towards winding down (but it’s not over yet), I’m sure many are thinking about the fall. Across North America, the announcements that many public schools are going to have in-class solutions, and others strictly online, while others are still deciding on the best course of action. As they assess their situations, the return to school is undoubtedly an essential first step in terms of allowing working parents to plan for the future.

In terms of knowing what’s going to happen in the future, of course, there are mostly unknowns. But it’s been interesting to read about how China’s recovery.

As the first country to grapple with the virus and the first to get it under relative control, China has had the longest time to adjust to the pandemic era. It implemented one of the most aggressive lockdowns and suffered one of the sharpest economic hits. Economic activity contracted 6.8% in the first quarter, compared with declines of 5% in the U.S. and 3.6% in Europe.

China has implemented aggressive testing and contract tracing. Many now believe that China’s ability to contain Covid-19 and perform policy support will mean that its economy is on course to return to its previous path by year-end, which would be astonishing.

They are the only major economy forecasting growth in 2020. The differences between China and their ability to impose their will and their political system compared to the U.S. or other Western countries are significant. Despite these differences, China does offer reasons for optimism as other countries get its health and financial crises under control. Their recovery is derived from the fact that people feel safe again.

Here are some of the trends emerging in China’s “recovering” economy: Consumers continue to shift more spending online, for groceries and electronics and also education. The pandemic has bolstered its expenditure on health and wellness.

This is a projection of the shifts in spending in 10 sectors in China year over year: 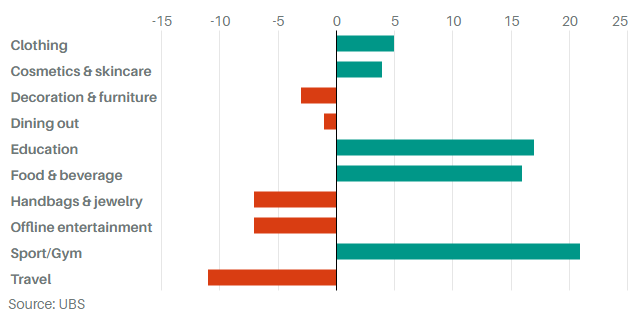 Almost a quarter of retail sales in China are now done online, double that of the U.S. Early in the pandemic, an estimated 70 million to 80 million Chinese weren’t working; now more than three-quarters of those are back at work. In the U.S., over 50 million Americans are still unemployed as a reference. While a consumer rebound will take longer in the U.S., as the virus isn’t yet under control, China’s recovery shows there’s light at the end of the tunnel.

From an investment perspective to the extent that consumer spending patterns are similar in China and other nations, it sheds some light on what sectors will benefit (and lose) when other economies recover. Indeed we are all looking forward to one day feeling safe again.

Sports have come back to North America. This weekend is the first of the golf majors, the PGA Championships at a fantastic venue in one of the great cities, San Francisco. Not sure how much I will watch, but I’m confident that Rory McIlroy will emerge as champion.