This week, I celebrated my 11-year-old son’s birthday. I bring this up because it was interesting to see his interactions with his friends, versus what we would have done in previous generations. It won’t be long before I’m not able to dictate the agenda for his birthday anymore. We did an old-fashioned “treasure hunt.” Some of the kids thought this meant we were going to be playing some video game, possibly virtually: what’s this “walking around and reading clues thingy they asked. Who is going to be driving us…”

Much as Birthdays are evolving, and my age influences my view of them and what I used to do for birthdays, – imagine the evolution of markets from the point of view different generations.

Here’s an example: A few years ago, when the “marijuana” space was emerging, many market observers dismissed it as the hype. Sure it ended up a massive bubble, but out of that did create a new sector: and some companies have emerged and created great wealth and a new, unfathomable asset class a generation ago: legalized manufacturing and distribution of Drugs. Recently I have clients asking about whether a new crypto market era could be dawning. Just like the Marijuana sector, which was dismissed by many, what if a cultural shift is emerging that could end up reshaping traditional markets to facilitate some of the technological advantages of these so-called crypto markets?

Understanding these shifts is essential. Generation Z, those born in the last 20 or so years, is now the largest generation in the world: 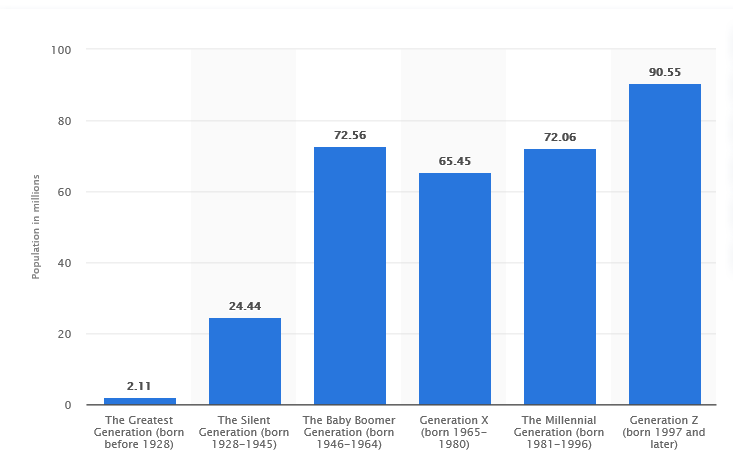 For sure, their investment perspectives are shaped by the reality of their situations. In North America, this generation is the most diverse in terms of their ethnic composition. 1 in 10 of voters in the next US election come from this group. They are the most educated, the most tech-savvy, the most attuned to environmental issues of any generation.

They are also digital natives and see nothing strange or novel in allocating their savings to assets via swipes on their phones. What’s more, the young and future savers will come of investing age in perhaps the worst recession in generations, with employment security at record lows, markets increasingly divorced from fundamentals and growing doubts about the resilience of fiat currencies. This is a different perspective than other generations. They have plenty of reason to question established financial wisdom and plenty of opportunities to explore new investment formats.

While the fundamentals of investing won’t change: companies that grow, or are profitable or are inventive will do better than those who aren’t growing, whose profits are eroding, or are in sectors that are not as important), this generation will emerge into a market in which traditional investment standards no longer apply. For them, this isn’t “unprecedented” it’s their norm. They will do so without the clear asset differentiation that their parents and older siblings have relied on to make portfolio decisions. As the investing culture evolves, so will the institutions that serve them.

Mercury, Venus, Mars, Jupiter, and Saturn will all be visible in the night sky this week — no telescope required. Granted, it’s going to take a bit of effort because only those willing to rise early on Sunday, July 19, 2020, will get to see this, but I thought it was pretty neat (I will probably just wait to see the pictures!)