Earlier this week, my Cottage Club sent out a notice advising we are now able to hold our golf competitions. This is now permissible under the Stage 2 guidelines. Social distancing guidelines will still apply.

I am certainly not conflating my participation in my club's fun Parent-Child Golf competition with professional sport, but I have been doing some reading on the economics of entertainment, as they announce plans to re-start in this environment. The health risks associated with the return of sports is for others to debate. I was entered into the NY Marathon this Fall. Fortunately, it has been cancelled: there was no safe way to have tens of thousands of runners altogether. For that marathon, there was a financial implication, but it was primarily health consideration that the right choice was made.

Why are professional sports returning, however, its motivations for not cancelling are straightforward: “Follow the money.”

LeBron James, who pity for, him, loses about $400,000 (USD) for every game he does not play: how is he going to survive? Globally, the total value of the sports industry was estimated to be over $500 billion. These are serious financial consequences for athletes, teams, leagues, owners, and the tens of thousands of people who work at sporting events or for the organizations.

Major sports are all reliant on broadcasting income. NASCAR racing, for instance, is genuinely designed for TV “sport”: They have a staggering $8.2 billion ten year television contract (people like watching cars go round and round), which is 70% of their revenues. The NBA has a $24 billion deal in North America for over nine years. The English Premier League (soccer for us folks in North America), $14 billion over three years. And Baseball has a three year $12 billion contract.

It is not too hard to understand that the Television “rights holders,” want the product for their consumers. And if you look at the dark blue in the graph, you can understand the importance of these Television dollars: 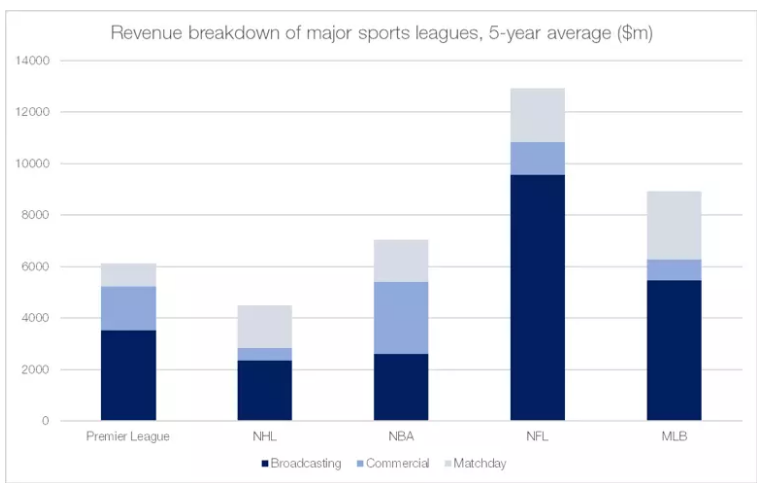 I think the single biggest takeaway from this is the significance of the contractual commitments to broadcasters. Not being able to produce games limits the amount of money that leagues have to distribute back to the clubs, their owners, and the players. A less-visible fallout from the cancellations is the effect on local governments, stadium authorities and teams that issued bonds to help pay for stadium construction costs. Cities and governments will also forgo collecting income taxes on the player salaries or sales taxes, and the fees generated in and around stadiums and arenas, including in parking lots.

I’ve talked often about how technology is changing the world, and how we ought to invest. Sports Is no different. The reliance of sports leagues on broadcasters no doubt has them worried. Baseball has created its own Major League Baseball Network, where they don’t have any obligations to broadcasters. Broadcasters, of course, they need advertisers to pay them for commercials. There are more technologies and mediums to consume sports today, and that will increase.

For many of us, one of the main attractions of live sports is the ability to bring people together, cheer for your “home team.” No doubt, any televised competition will bring massive ratings for those who miss this interaction. Indeed, I will have the radio on while I tinker around and listen to the Toronto Blue Jays, as they play their games presumably from the comfort of the SkyDome and live in the attached hotel. If the Toronto Raptors go deep into the playoffs, quarantined at Disney, we will be glued to the TV watching the games. I certainly won’t be cheering for the Toronto Maple Leafs (but my Senior Associate, Piotr Zajkowski will), but if my Edmonton Oilers make a run from their “Hub City” I will be watching.

Who knows if the health risks are worth it, or whether they can contain bubbles so that the teams don’t get the virus. Sports have budgets like any corporation or family: they need to do things to bring in money, and that’s the bottom line. It might be different considerations, but this shutdown has affected all of us.