I spend a lot of time trying to strategize for what it is going to look like when it goes back to normal? The chart below indicates what has historically happened in the years after every significant market drop since the depression. 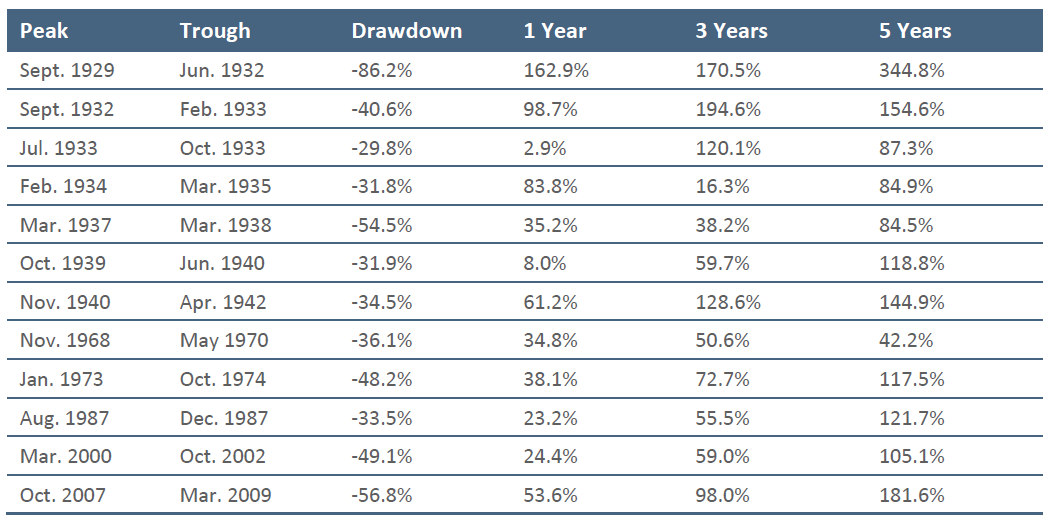 While the chart does give comfort in hindsight, we are all currently in the “drawdown” area. We can all project that things will get better in the future, but it does not mean that all stocks and all sectors of the economy will recover equally. The rate of new COVID-19 infections appears to be slowing in North America and Europe, and equity markets have made up some of their lost ground, at least in some sectors. But even as markets anticipate that major economies will start to reopen sooner rather than later, the historic plunge in the price of crude oil highlights the complex challenges ahead.

I was asked about the headlines this week for Oil contracts sold at -$37/barrel. To put this into context, I decided to look up the price of Oil Drums. If someone were to go out buy an Oil Drum for $120 Canadian, take delivery of a single barrel of Oil and get that same deal where you got paid $37US (or $50 Canadian), you would still have to believe that at some point, you would be able to sell the barrel for over $70 to make a profit.

So don’t do this!  Besides, what would the rest of your household or neighbours say with a bunch of Oil Drums stored in the backyard? Of course, this is just an illustration: but it’s not that far from the reality for Oil globally: no wonder Oil is so low.  In a depressed economy, with much-reduced demand and so much excess production, no one wants to buy it, and no one can afford to speculate on it, as the storage costs are so high. Therefore, it is hard to see an easy way out for Oil to recover as a sector for a long time (hence the earning it back differently than how you “lost” it). That said, there are a lot of sectors that will benefit in the mid-term from lower Oil prices.

I feel almost guilty sharing this last bit: we’ve been playing a lot of board games at home, and it’s been fun to reconnect to some of the games I played as a kid with my family and friends: in that pre-internet era.  We’ve been playing a lot of Monopoly. Don’t tell anyone at my home, but I did some research and honed up my Monopoly Game Theory. There is some good stuff in there. Strategy spoiler alert: Buy Illinois, New York and Tennessee Avenue and the Railroads first. Get three houses, and understand the probabilities of the dice. You can thank me when you crush your household next time you play: I won’t tell!