There has never been a bear market, quite like this one. Since peaking on February 19, 2020, the S&P 500 has tumbled 29%, making it the fastest drop from an all-time high to a bear market on record.

This weekend, the U.S. will close its doors to casual Canadian visitors and shoppers. Canada will do the same.  I believe the economic relationship between America and Canada is sometimes underappreciated: we are each other's largest trading partners.  Essential workers and goods will continue to be able to cross the border by truck, train, marine vessel and aircraft.  This is significant as the supply chains between our countries are essential to both countries' well-being.

Nearly 400,000 people cross our shared border every day. Almost 9 million American jobs rely directly on trade and investment with Canada. More than half of all the goods and services of Canada's imports come from the United States. Every billion dollars worth of U.S. agricultural exports to Canada supports about 8,100 U.S. workers. Canada is the No. 1 agricultural-export customer for 30 U.S. states. Canada was the second-biggest direct investor in the U.S. in 2018.  Americans consume 90 % of Canadian energy exports. Americans buy just over 75% of all Canadian merchandise exports. The United States is the single largest foreign investor in Canada.

Conversely, Canadians buy more American goods and services than any other country: Canada is still America's biggest "customer." While we aren't as crucial to the U.S. and they are to us, it is a material two-way relationship.

What this means for investors is that our reliance on the U.S. economy and our recovery is predicated on an American recovery.  The Canadian economy is more vulnerable, more concentrated in a few sectors and too reliant on Oil that we have to sell well below the market rates for a myriad of reasons (that's a subject of another article). The Canadian economy will lag this subsequent recovery (it always does).

I continue to make investment changes while remaining invested for most of the clients' portfolios, which based on the conversations I've had with each of you. We agree to continue being prudent in the market: all stocks and sectors will not recover the same way, nor have they performed the same in this correction: 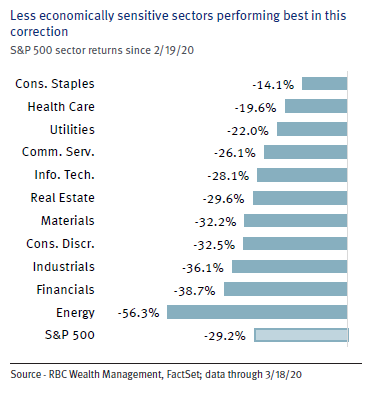 We will recover. On Thursday, China reported no new local cases of coronavirus for the first time since the outbreak began.  Some have asked: "how can we trust their numbers"?  I think one should take comfort that they are reporting that more than 90% of China's large enterprises outside Hubei province have resumed work.  As a cross-check, the fact that Apple has re-opened their China retail stores, while they remained closed in the rest of the world, would suggest that indeed the worst is over in China.

One thing we can be sure of: a bottle of Purell hand lotion won't sell for more than a barrel of Oil forever.  Things that can't continue forever don't.