I am often asked about when the next recession is going to happen. I read a lot of articles, listen to many different pundits, hear from clients and friends: everyone has an opinion.

The narratives promoted by economists and strategists, for the most part, all sound well-reasoned and even seductive with their "insights," whether they are forecasting an imminent recession or more growth. But in reality, the actual track record of professional forecasters has been poor (not as poor as my weekly predictions, to be fair).

Compare what happened in the last two recession to what consensus was saying. In February 2001, a month before the beginning of the mild recession prompted by the bursting of the dotcom bubble, the consensus was an acceleration in real GDP with a modest uptick in unemployment. Similarly, in November 2007, a month before the worst economic crisis and the Great Depression, the consensus was an acceleration in growth, and continuation of robust job creation.

These were not long-dated forecasts. They produced with the recession knocking on the front door, and virtually everyone missed it.

One should always be skeptical of economic forecasts because there are many dynamics and behaviour that go into an economy, much more than a point in time number.

Below, I'm sharing a "recession scorecard." It collects many factors to test whether the economy is growing or falling and whether things are more or less vulnerable. Though the choice of indicators can be up for debate, this at least gives a more robust set of indicators rather than one single measure: 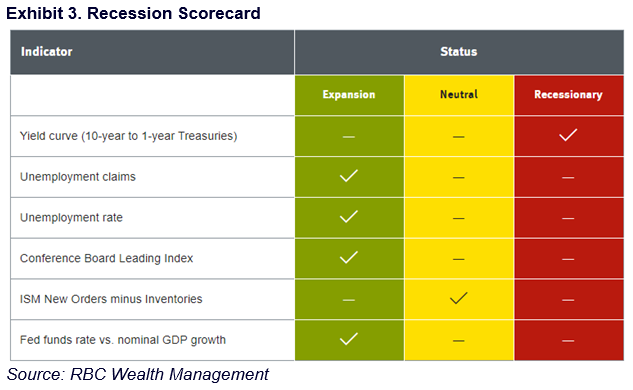 Things remain for now decidedly positive overall (at least in the US, to which Canada's economy is very much indebted). I can provide more information on this if anyone is interested.

People have asked me about the title of my weekly commentary, "Kingsmill's Investment Miscellanea."I would like to hear from you and your take on whether a recession is imminent, you can share your thoughts on the title for my commentary: any other ideas for a name?

And speaking of title changes, the Sussexes, living in Canada with their decidedly regally named son, Archie Mountbatten-Windsor, have been told they must drop their use of the word "Royal" in their branding. I came up with the name H & M for their brand but pointed out it is already taken.