We size up the bounce in global equities, but we caution that this is no time to be complacent as plenty of uncertainties and risks could shake markets.

Most equity markets have rallied substantially since Mar. 23, the day many country and global indexes hit a low point. Since then, the S&P 500 has jumped 25.1 percent, while Canada’s S&P/TSX has climbed 23.8 percent and Europe’s main benchmark has bounced 15.9 percent—all in less than a month.

These moves have mitigated the damage that has occurred since global benchmark indexes reached all-time highs in mid- February. For example, instead of the S&P 500 being down 33.8 percent from the global peak to its low point, it is now down “only” 17.2 percent. Other markets have improved as well, as the chart illustrates.

Equities have bounced sharply for a number of legitimate reasons, and this is not an unusual phenomenon during major bear market periods of the past 20 years. In fact, the S&P 500’s move is roughly in line with recent history.

But this is no time to be complacent about market risks, of which there are many. We continue to believe it is appropriate to hold equities at the Underweight level in portfolios—this is below the long-term strategic recommended level. The strength in equity markets allows those who are not yet Underweight to reposition portfolios.

We outline the catalysts behind the recent rally, compare the moves to prior bear market periods, and discuss the lingering risks.

Equity indexes have recovered some of their lost ground 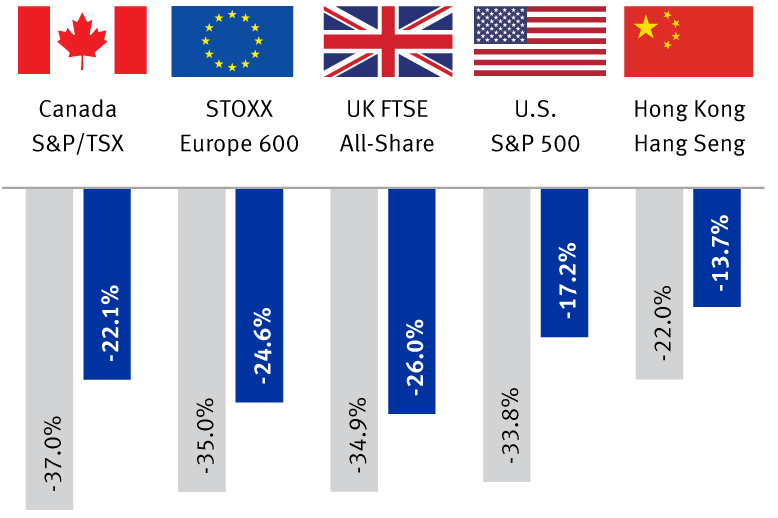 The avalanche of negative COVID-19 news—that sometimes piled onto equity markets by the hour—has receded, and some glimmers of light have started to shine through, boosting equity markets in the past few weeks:

Understanding what this rally is

While the catalysts that drive bear market rallies differ dramatically from one bear market to the next, it’s interesting that the magnitudes of the rallies are similar.

During the bear market associated with the bursting of the tech bubble and 9/11 attacks, the S&P 500 rallied between 19.0 percent and 21.4 percent on three separate occasions, according to Bloomberg.

During the global financial crisis bear market, the S&P 500 staged two big rallies less than one month apart in late 2008. The first was an 18.5 percent move, followed by a separate 24.2 percent run.

Such moves provided opportunities to reposition portfolios until the full bear market cycles were flushed out of the system.

Despite the glimmers of hope and the slower pace of negative news lately, there are still a number of risks facing this COVID-19 bear market:

We think the lingering uncertainties argue for keeping some powder dry, and holding equities at the Underweight level in portfolios.

In the near term, markets have to contend with weak economic data, a difficult Q1 earnings season, and uncertainties associated with unwinding mass quarantines. Over the longer term, we expect major economies and corporate profits to bounce back.