Can you stop rising rates? A look back in time

An increasing number of questions are coming in around the rise of interest rates, and how it will impact things in the future. We have existed in an age of lower interest rates for quite some time, that the most modest of upticks in the rate environment sparks concern among investors and consumers alike. So what's the deal anyway? Can these things be controlled, or are we going to be faced with runaway borrowing costs shortly?

I don't know if you have noticed, but one of the global benchmarks (the US 10 year treasury) has seen it's yield creep up to pre-pandemic levels. Not a monstrous climb, but on a relative basis, we were talking razor thin levels not long ago, and a dip into negative territory for the first time ever. Sufficed to say, that is quite the comeback. With rising rates (I'll get to inflation another time) comes the concern of the impact on portfolios performance (for both bonds and stocks), and also borrowing costs for consumers. The fed can control the short end of the curve by keeping rates down, but what can be done about the long end? Well....here are a couple of lesser known ideas

1- Buying longer dated treasuries - If the fed steps in to control the pricing on these (and thus keeping the level of demand elevated) the long end of the curve can be somewhat prevented from steepening too much. In context, if the longer dates rates stay down, the market rates that push through to the consumer should as well. (albeit artificially I suppose)

2- Yield Curve Control (YCC) - yep...I had never heard of this either until I read about it a couple of days ago. Deployed by the Fed back in the 1940's, which coincidentally was the only other time debt to GDP was this high and inflation was rising, the fed capped the long end of the treasury at 2.5%. What was seen, was wild swings in inflation around a steady long term rate. See the diagram below. Could this be coming......I don't know? 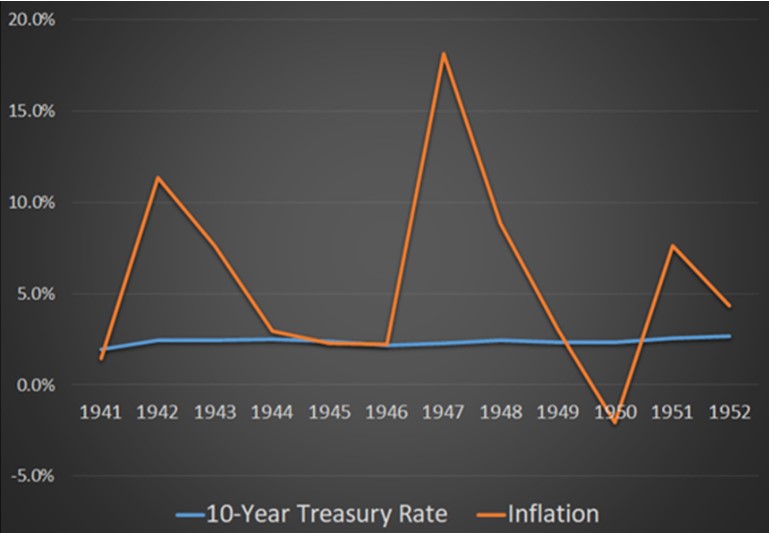 The Business of a Family Biz

Featured in this weekend's reading segment is a wonderful thought piece put out by RBC Wealth Management Canada. This thought piece offers a great perspective on how to integrate the next generation into the family business. Having a core set of values...

Investors and consumers alike are wondering whether the inflation numbers we are seeing right now (yes folks, they are real and they are higher than what we are used to) are permanent, or short term. In a short interview with Kelly Bogdanova, we are given...

In today's insight from our portfolio advisor group, they examined the demographic challenge facing China over the next 5-10 year. Today, the Chinese government increased the number of children a family can have from one to three. Why? Because China is...