The transition could represent a grand economic realignment, but investors shouldn’t lose sight of what it’s going to take to get from here to there.

Some experts believe that meeting the goals would take the largest industrial mobilization ever in peacetime—and on a global scale. International agreements seek to lower global carbon emissions 30 percent by 2030 and reach near net-zero emissions by 2050 for most countries, with the ultimate aim of limiting the global temperature increase to 1.5 degrees Celsius this century compared to pre-industrial levels.

Such a transformation could require a grand economic realignment, affecting a wide swath of sectors, and at least rivaling the industrial revolution of the late 19th century and the technological revolution of the second half of the 20th century, if not surpassing them.

There is little doubt in our minds this would bring opportunities for investors. We believe it could be a boon for companies involved with the multi-industry, multi-trillion dollar infrastructure buildout over the medium and long term. We view this as an important investment theme and anticipate it will attract capital from institutional and individual investors.

But there are practical considerations and challenges associated with getting from the fossil fuel-based energy system of today to a cleaner, advanced low-carbon energy system of tomorrow. Therefore, we believe the transition will have to strike a balance between comprehensively addressing climate change and helping to ensure economic growth and the well-being of populations.

The infrastructure and mineral requirements for the energy transformation are immense, and are compounded by the simultaneous shift toward a digital economy that demands an abundance of electricity.

Yale Professor William Nordhaus, recipient of the 2018 Nobel Prize in Economics, estimates it would take roughly $100 trillion to $300 trillion in new capital on a global basis to reach net-zero emissions by 2050. “And much of that new capital must come in the form of technologies that are largely unproven or immature today. Research and development is urgently needed to make this possible,” he wrote in an October 2021 Foreign Affairs article.

Capital spending would come from governments, industry, and other private sector sources.

BloombergNEF (BNEF), a research firm concerned solely with the energy transition, estimates that over the next 30 years spending on energy and other infrastructure could range from $94 trillion to $175 trillion.

Within this wide range, BNEF highlights three scenarios that vary according to the main sources of decarbonization technologies. If spending is primarily focused on renewable energy (wind and solar) and hydrogen, the firm’s “green scenario,” the price tag is estimated at $161 trillion. If a meaningful portion of new power generation comes from low-carbon, advanced nuclear power reactors (which some countries advocate) and hydrogen, in addition to renewables, the infrastructure buildout would be around $138 trillion, which represents BNEF’s “red scenario.” A lower-priced “gray scenario,” at around $96 trillion, incorporates renewables but gives a relatively greater role to the combination of natural gas and other fossil fuels, and carbon capture and storage compared to the other two scenarios. 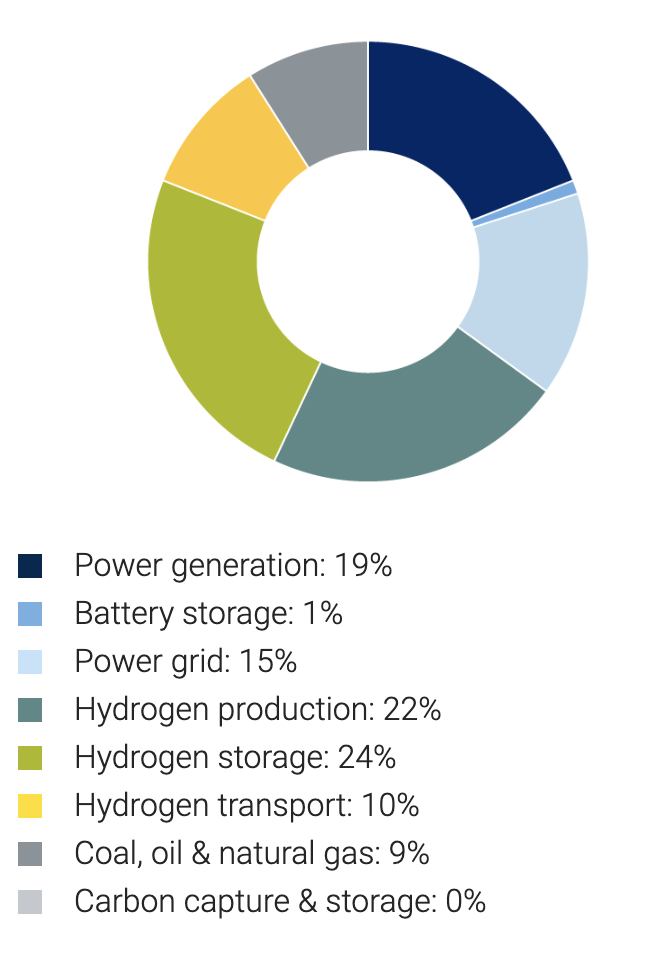 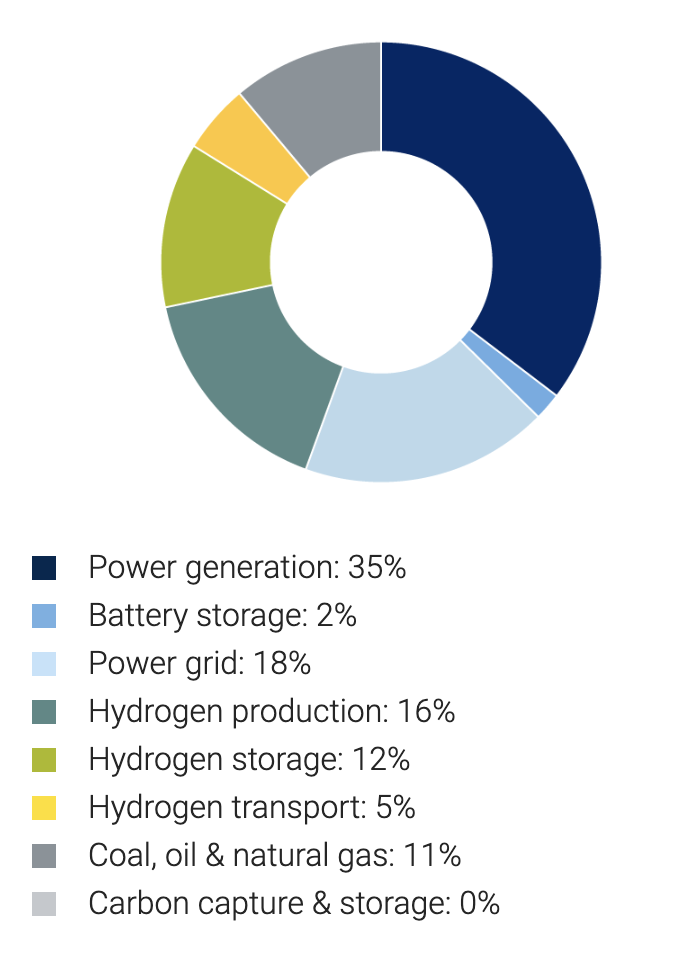 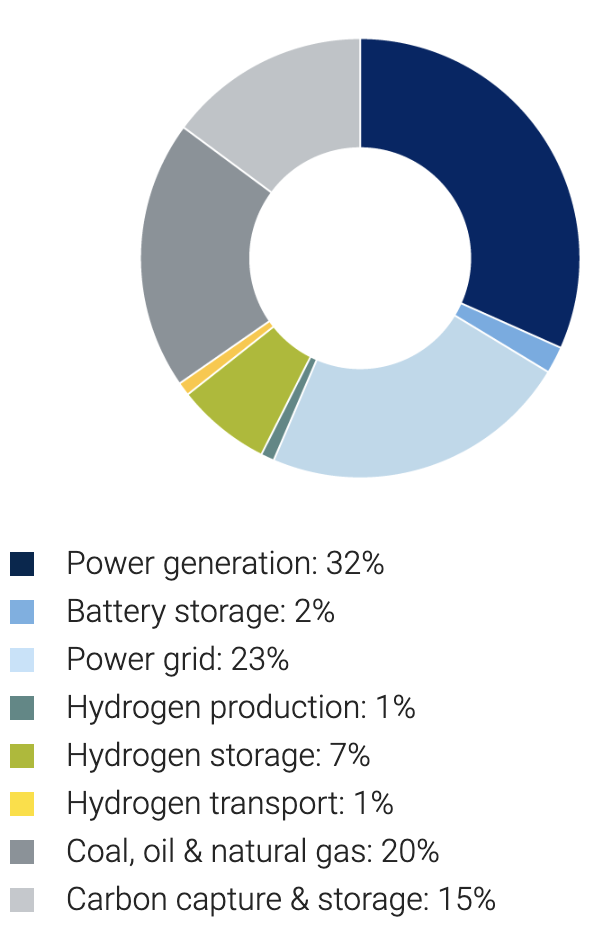 Source - BloombergNEF “New Energy Outlook 2021”; the charts present the median value for each investment category wherever a range is presented in the original data

Regardless of which path the transition takes—or if it’s some combination thereof—BNEF estimates annual global energy and infrastructure investment would need to more than double, rising from about $1.7 trillion today to $3.1 trillion to $5.8 trillion per year, on average, over the next 30 years.

These massive investment figures can be difficult to grasp. Narrower industry examples can help put into perspective the scale of transformation and potential opportunities for investors:

The reality of getting from here to there

Where there are opportunities, there are also realities and challenges. “There is a vast chasm between aspirations and policies,” according to Nordhaus. The aggressive carbon reduction goals don’t currently line up with the steps proposed to achieve them.

One example: Nordhaus believes “the single most important step to achieve climate objectives is to put a market price on the emissions of carbon dioxide and other greenhouse gases.” He asserts that the price of carbon needs to be high and harmonized across sectors and countries in order to “change behaviors” of “millions of companies and billions of consumers.” Currently, the market for pricing and trading carbon is in its infancy and markets that have been established vary widely across regions. Nordhaus argues that the existing mechanisms are inadequate.

In an April 2020 article McKinsey wrote, “Decarbonizing global business at scale is achievable, but the math is daunting.” It went on to state that sweeping action starting now is required: “Our scenarios reflect a world in which the steepest emission declines would need to happen over the next decade. Without global, comprehensive, and near-term action, a 1.5-degree pathway is likely out of reach … every part of the economy would need to decarbonize.”

Analysts widely acknowledge that major economic, business, and societal shifts would need to take place to achieve decarbonization goals. With this in mind, we think investors should consider a few practical challenges:

Will society tolerate the various lifestyle adjustments that could be needed to achieve the carbon reduction goals, particularly if there are additional costs and/or consumption restrictions for households, and the process is disruptive at times? Polls indicate that populations in many countries overwhelmingly back proposals to reduce the effects of climate change and prioritize alternative energy solutions, including in the U.S., which is illustrated in the Pew Research chart below.

Americans back a range of carbon reduction policies

% of U.S. adults who favor each of the following proposals to reduce the effects of climate change 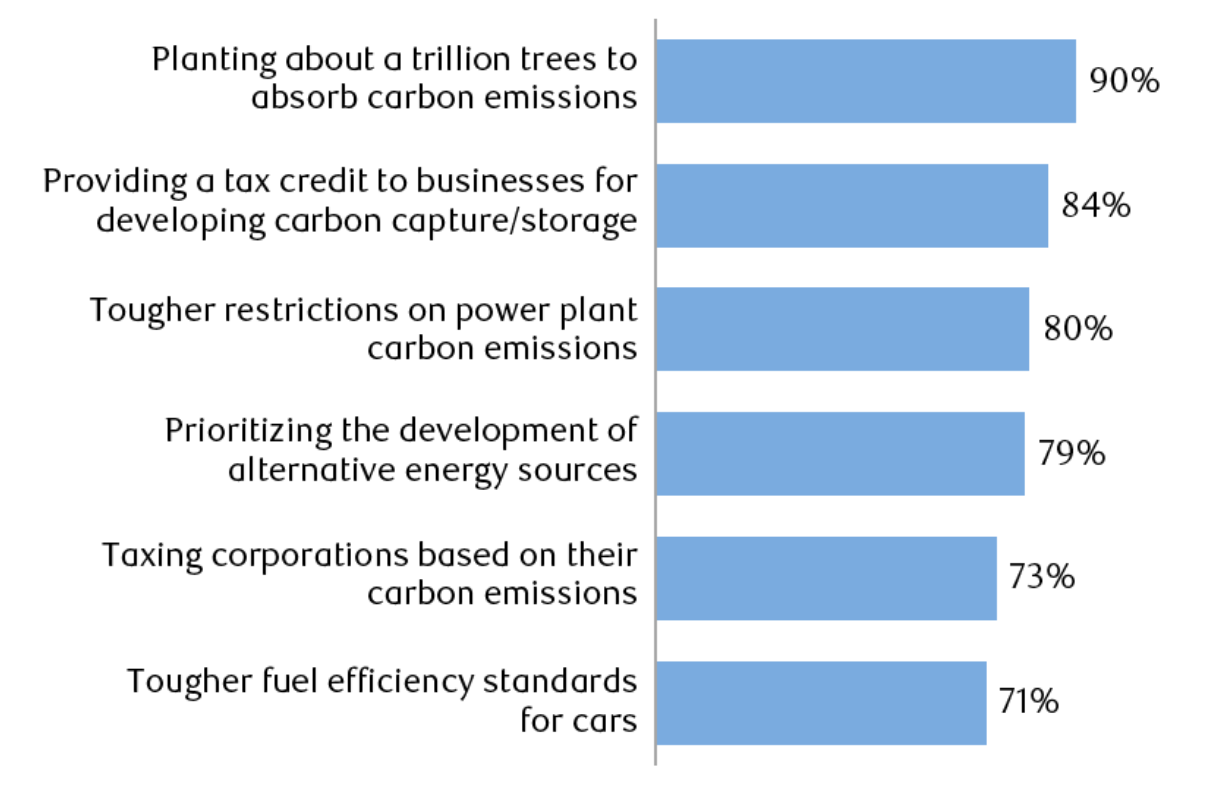 Source - Pew Research Center; survey conducted 4/29/20–5/5/20, excludes respondents who gave other responses or did not give an answer

However, when push comes to shove, at this stage not everyone is willing to pay for it out of their own pockets. A large survey in Switzerland by domestic media outlets recently revealed that most Swiss citizens currently have little-to-no appetite for paying more for heating, fuel, and air travel in order to meaningfully reduce carbon output. The “yellow vest” protests in France, which began in 2018 in part because of opposition to a fuel tax increase, indicate that segments of populations could push back on carbon reduction initiatives if they negatively impact household finances or employment opportunities.

Will countries that view each other with healthy suspicion or as rivals (or worse) use the green energy transformation as geopolitical and geoeconomic tools of influence, or as a cudgel to ultimately impose punitive economic restrictions, sanctions, or tariffs? The carbon reduction goals embedded in international agreements de facto assume that rival countries will at least loosely coordinate their energy and industrial policies consistently, for many decades. These are laudable objectives, but history argues this will be difficult to achieve.

The transition could be bumpy

The ongoing energy crisis in Europe and Asia is instructive. While this has a variety of root causes, including the unusual spike in demand for energy and manufactured goods following the COVID-19 shutdowns in 2020, the natural gas and coal price surges in these regions are intertwined with factors related to the energy transition.

The experiences of China and Europe illustrate that the path toward zero emissions and a clean energy economy won’t necessarily be seamless. We think many countries will face obstacles along the way.

A marathon, not a sprint

Despite the challenges and uncertainties, we believe the energy transition could be a boon for companies involved with the multi-industry infrastructure buildout and resource extraction associated with a green, digital economy. Even if the trillions in infrastructure spending forecast by BNEF, Nordhaus, and other experts is only partially met, the scale of change could revolutionize segments of the global economy. We think this will be a major investment theme going forward.

For the time being, we would focus on opportunities that are likely to find their way to market in the next 5–10 years and are not as dependent on substantial, coordinated long-term government subsidies or private sector investments that have yet to be designated or allocated, or may not fully pan out.

While individual equities of companies involved in the energy transition and exchange-traded funds that group such companies together can be good sources of investment ideas, we recommend investors also consider mutual funds and money managers that specialize in this area. This is a multi-decade marathon, not a sprint. We think portfolio managers who focus on the green energy transition day-in and day-out, keeping abreast of the near- and medium-term opportunities, with the long-term view in mind, could have the upper hand as developments unfold. 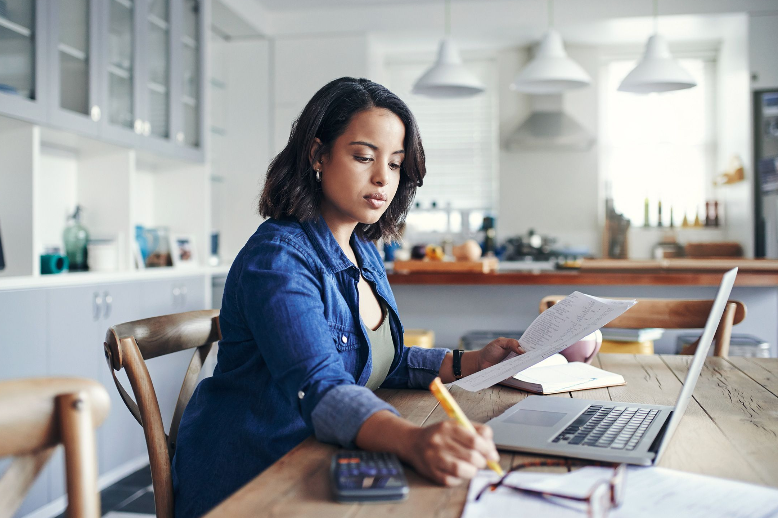 Equity investing for the next ten years

As we come out of the COVID-19 era and then move beyond it, what are the evolving forces driving the investment narrative and how can investors adapt? 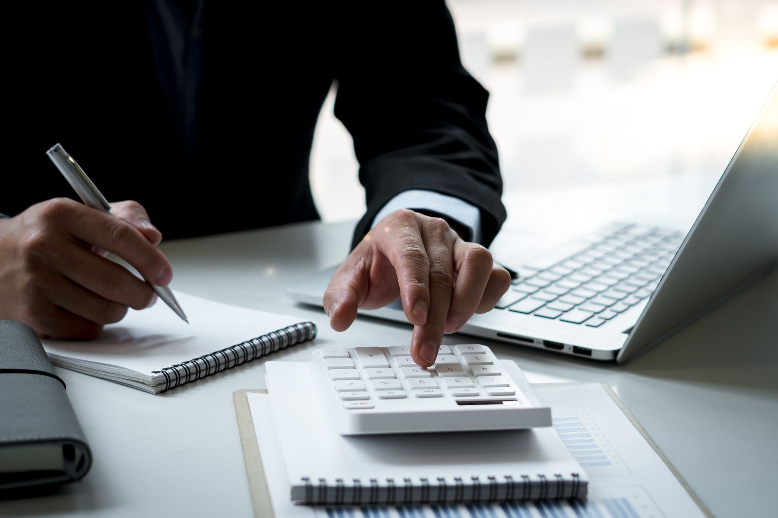 Is the U.S. corporate debt mountain something to worry about?

A historic corporate debt binge has supported the economic recovery. How should investors view the opportunities and risks for this business cycle? 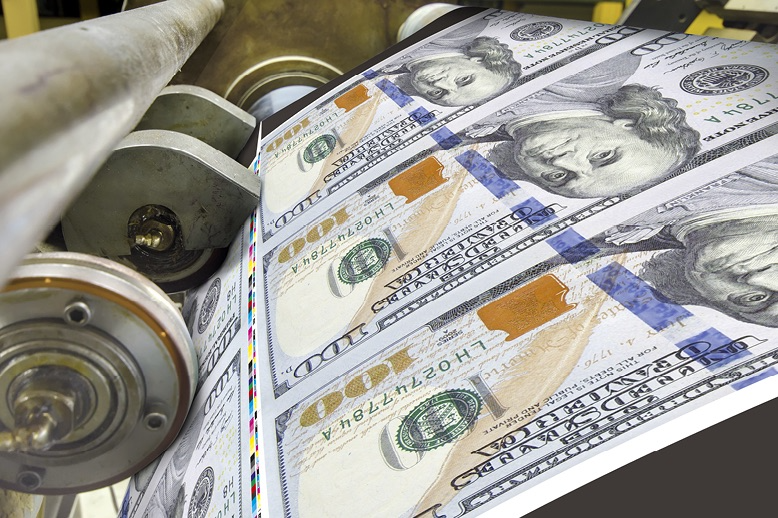