In our featured economic commentary this week, we focus largely on Canada and discuss the implications of both the government’s budget and the Bank of Canada’s decision to taper its bond purchases.

With a continued focus on Canada and the recent budget released by the federal government, we have included two additional resources: a link to Eric Lascelles’ latest video commentary, Third wave progress, China update and the Canadian budget, and the recent article, Budget 2021, that provides a summary of the key measures introduced. Looking south of the boarder, we’ve included the podcast, What’s fueling U.S. Bank earnings, from Stu Kedwell.

Have you RSVP’d? We’ve included the event details for our two upcoming events below. If you haven’t already let us know that you will be attending, kindly RSVP at your earliest convenience. If you have a question for one of the speakers, you are welcome to include it with your RSVP.

Is there a topic that you are interested in hearing more about? Send us an email and we’ll find a great article to share or even host an event on the topic.

Global markets were somewhat directionless over the past week, but encouragingly, levels of volatility remained the lowest they have been for some time. Despite the quiet week for the markets, there is much to discuss with respect to Canada: the third wave of the virus remains a near-term headwind, the Federal Government unveiled its much anticipated budget, and the Bank of Canada announced a subtle but meaningful shift in its monetary policy.  We discuss more below.

We may have seen the first signs of slowing with respect to the virus spread in Canada. The country’s seven-day average rate of new daily infections was relatively flat over the past week, at 8,600. The most problematic provinces were Manitoba, Alberta, Nunavut, and Nova Scotia, with the latter being particularly noteworthy given the situation had been relatively stable in the province until recently. Ontario’s infection trends rose, but the pace was noticeably slower, and Quebec, BC, and Saskatchewan saw declines. An ongoing slowing and outright decline over the next week may suggest that the country has reached a peak in its third wave.

The United States has continued to experience a relatively stable situation, with new infection trends slowing. Elsewhere, the story remains problematic with a number of countries facing very challenging situations. India may be the most noteworthy as it is dealing with severe strain on its health care infrastructure. After having reported a record of more than 210,000 new daily infections a week ago, India surpassed that level with a tally of 330,000 daily infections over the past week.

The federal government unveiled its 2021 budget this past week; its first in two years because of the pandemic. There were two broad takeaways.

First, the budget was two-pronged in nature. On the one end, there were extensions to existing pandemic-related programs, and new ones to help businesses and households deal with ongoing pandemic-driven disruptions. On the other side, there was spending to foster more sustainable growth. This includes an ambitious national early learning and childcare program aimed at boosting women’s labour force participation over time, though it will depend on cooperation from the provinces. There were also wide-ranging measures announced covering everything from employment insurance eligibility, to old age security, infrastructure and transit, affordable housing, and climate mitigation. Ultimately, the budget was very much focused on spending – roughly $100 billion over the next three years – in the hopes of spurring higher economic growth.

The fiscal implications are not surprising. The federal government’s debt-to-GDP ratio (debt to income) is going to remain elevated, at nearly 50 percent for the foreseeable future. This is meaningfully higher than the 30 percent seen prior to the pandemic. The increase in debt may limit the government’s ability to respond to future crises, but it isn’t necessarily a problem right now. The low interest rate environment has made the cost of carrying this debt manageable and other governments around the world have faced increases in their debt burdens over the past year, suggesting that Canada is not alone.

Bank of Canada starting to “taper”

Over the past week, the Bank of Canada became the first major central bank in the world to announce a tapering, or slowing, of its weekly purchases of government bonds. The Bank, like many others, had embraced this approach since the onset of the pandemic to increase the money supply, foster an environment of low bond yields, and help stabilize the economy.

Despite the challenges that remain, the environment today has changed meaningfully from the same period a year ago. Based on a more resilient economy and the improving outlook, the Bank of Canada raised its forecast for economic growth over the next few years, and in particular for 2021. Moreover, it now expects economic slack – productive capacity that is not being used – to be fully absorbed by the first half of next year, and inflation to reach, if not surpass, its two percent target later next year. As a result, the Bank no longer feels the need to stimulate as much and it will start to modestly slow its pace of bond purchases beginning immediately. Investors are now shifting their expectations as to when the Bank of Canada will raise interest rates, with many now seeing late 2022 as a likely timeframe, sooner than the prior expectation of 2023.

This week’s decision by the Bank of Canada marks a small and seemingly incremental change, but it is meaningful nonetheless. It suggests that the future direction of monetary policy over the next few years is likely to be less, rather than more, accommodative. In some ways it’s a good sign as it indicates that we may be moving towards a more normal and healthy economic and operating environment. However, investors will have to undoubtedly think more carefully about how to position their investments and portfolios, because interest rates play such a fundamental role in the valuations of all assets.

This week, Eric Lascelles reviews strong economic data in North America and global vaccine developments. He also looks at China for clues to the global market outlook, and shares some thoughts on Canada's first federal budget in two years.

Use this link to watch the video or read the transcript online: Third wave progress, China update and the Canadian budget 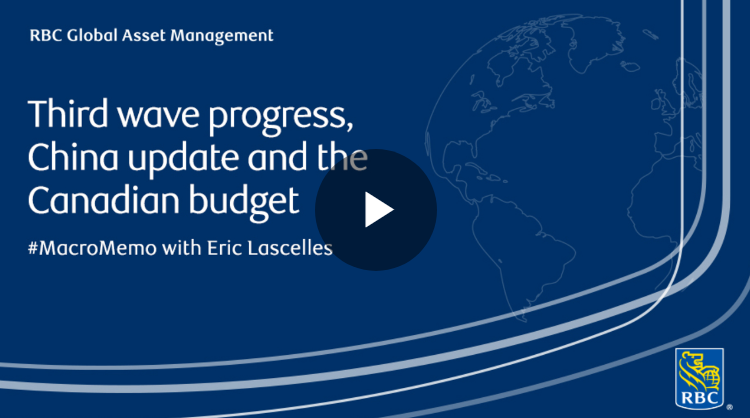 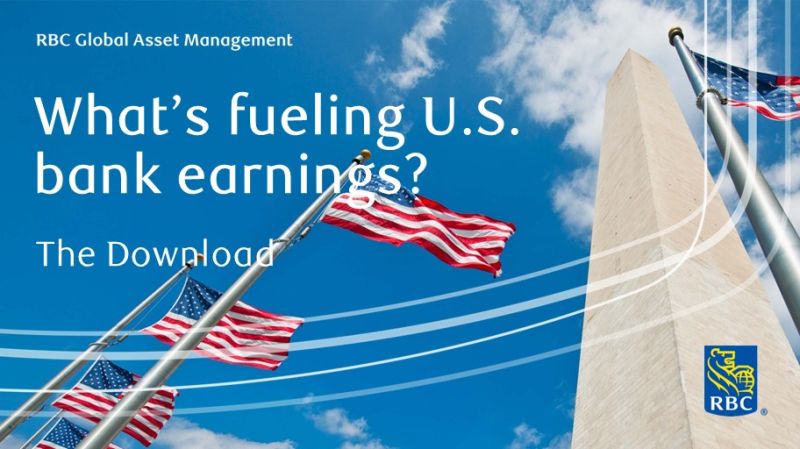 In this episode, Stu Kedwell, Co-Head of North American Equities with RBC Global Asset Management, looks at the strong first quarter results from America’s top banks and what they could signal for Canadian investors. Stu also discusses the current holding period of recovery we’re in, and the ‘sparks’ – from vaccine success to robust infrastructure programs – needed to reignite economic activity.