Meaningful gains in the markets

Global equity markets marched higher over the past week, with many approaching the peaks reached at the beginning of the year and others reaching new all-time highs.

Global equity markets marched higher over the past week, with many approaching the peaks reached at the beginning of the year and others reaching new all-time highs. Investors have grown more comfortable with the possibility that life, and the economy and earnings, will return back to normal once vaccines become widely available in the second half of next year. This has helped to offset near-term concerns with respect to the pandemic. In this week’s commentary, we provide an update on the virus front, along with our thoughts on the Canadian stock market, which has spent the last few years grappling with a number of headwinds. We also weigh in on the banks as they are set to report results over the next week.

Europe appears to have turned a corner, with a second straight week of progress across the region. Not too surprisingly, some of the countries that implemented the strictest measures are seeing the most improvement. Belgium for example, which entered lockdown on October 31st, saw its new daily cases average closer to 4,000 over the past week, well below the peak of more than 20,000 a month ago. Others too are seeing progress, albeit less striking, and have indicated that restrictions will be extended until new infection rates decline more meaningfully.

Canada’s seven-day moving average of new daily infections is now above 5,300, versus the 4,700 from a week ago. Alberta led the way with the highest rate of growth in new daily infections, and the government responded with a new set of restrictions across the province. Saskatchewan wasn’t too far behind as it also had a high rate of growth in new daily cases. Increases were also evident across British Columbia, Ontario, and Manitoba, but they were much more modest by comparison. Quebec saw another week of stable to lower cases. Meanwhile, the Atlantic bubble has burst with Newfoundland and Prince Edward Island effectively pulling out from the group given signs of outbreaks in New Brunswick and Nova Scotia. While cases remain low, average new daily infection figures have more than doubled in each province over the past week.

Elsewhere, there has been a noticeable deterioration in some other regions: Russia, Mexico, Brazil, India, South Korea, and Japan. All have witnessed a turn higher in new infections after a period of relative stability. Meanwhile, we will wait another few weeks to get a better sense of the situation in the U.S. given the Thanksgiving holiday which could aggravate the country’s elevated case numbers.

The Canadian stock market has made meaningful gains of late, and is now within reach of its high last seen at the beginning of the year.

In addition to the COVID-induced sell-off earlier this year, the broader market has faced a number of headwinds in recent years. First, investors have been concerned about an elevated level of consumer debt and the headwinds it poses to economic growth and to sectors such as banks and real estate. Meanwhile, the oil industry has been plagued with a trifecta of issues: low commodity prices, a lack of pipeline capacity to transport oil, and rising investor interest in more sustainable energy sources at the expense of traditional fossil fuels. Finally, the level of competitiveness within Canada has been regarded as inferior to the U.S. More specifically, businesses in our country have been faced with a less favourable corporate tax and more restrictive regulatory environment.

The issues above have existed for a few years and are key reasons why Canadian equities have underperformed relative to the U.S., and now trade at substantially lower valuations. Furthermore, these headwinds, along with a few secular themes, have driven some changes in the make-up of the Canadian stock market. For example, the Financials and Energy sectors accounted for a rather large 60 percent of the stock market five years ago and today that figure is closer to 40 percent. Meanwhile, Technology, Utilities, Industrials, and Materials have seen their weightings in the broader market increase during this time.

The question worth asking is “What’s next?” We have limited visibility into when the headwinds above may completely fade. Debt levels remain high in our country, the energy woes continue, and competitiveness takes time to change. However, even changes at the margin can be helpful at improving investor sentiment, and we see potential on this front. The actions taken by the Canadian government and the banks (explained below) should help limit the implications of elevated household debt to the broader economy and the financial sector. Meanwhile, a more sustainable recovery in the global economy beginning in the second half of 2021 may bolster demand for oil and provide a much needed tailwind for the energy sector. Lastly, a new U.S. administration is less likely to be as “pro-business”, implying any competitiveness gap between Canada and the U.S. may not necessarily widen further. It may not sound like much, but incremental changes may still be appreciated by investors.

The Canadian banks are set to report results over the next week. Like the broader market, they have surged higher of late. This has been a welcome development given the group had struggled up until recently, weighed down by concerns over potential credit losses stemming from business closures and high levels of unemployment, but the banks have spent months setting aside billions of dollars known as provisions to prepare for any future loan losses. Furthermore, the substantial aid that the federal government has put in place has delayed, if not reduced, the amount of losses that banks have dealt with. Moreover, an improving economy in the second half of 2021, should it materialize, will act as a tailwind and may even allow them to release some of the capital they have set aside, benefitting earnings to some extent. We still expect challenges in the years ahead because of a lack of revenue growth as ultra-low interest rates have left net interest margins (a key source of profitability for banks) with little room to expand. Despite the outlook for lackluster earnings growth, we believe a worst case scenario, significant credit losses, has largely been averted.

We have grown more confident in an eventual return to the life we knew, and this view appears to be shared by many given how well markets have done of late. The optimism is encouraging to see in light of the environment, but it is important to remain level-headed, disciplined, and focused on our long-term investment plan.

A near-term outlook for interest rates

In this video, Dagmara Fijalkowski shares four reasons to suggest that interest rates are unlikely to move higher over the next year. Among other factors, post-election implications for monetary stimulus and economic recovery seem to indicate that rates will remain low in the near term. 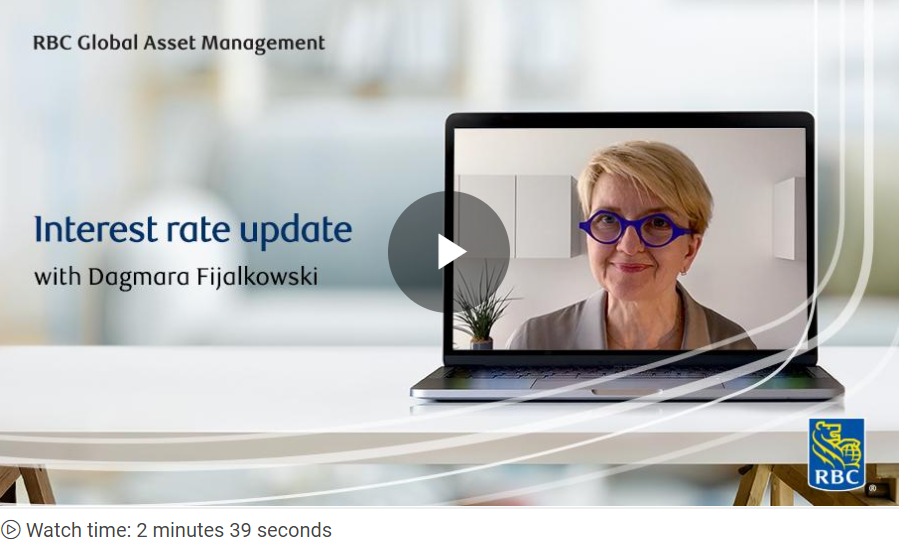 Watch the video online: A near-term outlook for interest rates

5 Ways to Enjoy the Canadian Winter

Unfortunately, the Canadian/U.S. border is closed to leisure travel, and re-opening doesn't seem likely in the near future. That means, for most Canadian snowbirds, a migration south of the border isn't in the cards. But you can still enjoy the season — only a little differently this year. Read the full article here: 5 Ways to Enjoy the Canadian Winter.