An inherent resilience across economies and businesses

Our featured economic commentary provides you with an update on the coronavirus and our thoughts on the resilience in corporate earnings this year.

Investors, and much of the world for that matter, continue to be faced with a predicament that is likely to last into 2021. Near-term, the virus continues to present headwinds to economic and earnings growth. More importantly, it remains a serious challenge for the health care system and the overall well-being of millions of people. But, vaccine developments of late have been positive, suggesting a more sustainable recovery in the economy may emerge in the second half of next year. We discuss this below, and address the surprising resilience that we have seen with respect to corporate earnings this year.

Is Europe on the mend? It may be too early to conclude that it is past the worst of this second wave of the pandemic. After all, hospitalizations and deaths reached new highs across a number of countries over the past week and the upcoming holiday season could complicate things, but a number of countries - Belgium, France, Czech Republic, Slovakia, Poland, and the Netherlands – reported lower new daily infections over the past week. Elsewhere, data has been mixed across the region but there does appear to be greater stability, which is not necessarily surprising given the very restrictive measures put in place a few weeks ago.

Canada saw its new daily infections increase this past week, but it too has seen the pace of new infection growth slow. Canada’s seven-day moving average of new daily infections is now nearly 4,750, up from the 4,450 from a week ago. Saskatchewan and British Columbia led the way this past week with the highest rate of growth in new daily infections, prompting both governments to raise new restrictions around mandated mask wearing and travel. Alberta and Ontario saw increases, but they were relatively modest. Manitoba saw limited change over the past week, which was a welcome break given it continues to grapple with the highest infection rate per capita in the country. Quebec saw a fall in new infections. Unfortunately, the East Coast, which had up to this point largely avoided the second wave has now seen its numbers move higher, though the figures remain low relative to other provinces.

In the U.S., the number of new daily cases continued to march higher. The crisis is widespread and has escalated in some states, forcing some governments to take more restrictive action. With U.S. Thanksgiving less than a week away, we see limited scope for improvement over the next few weeks.

Vaccines on the horizon

There is rising optimism on the vaccine front. Over the past week, there were positive updates on three candidates.

Pfizer and BioNTech completed their Phase 3 trial and confirmed that their candidate’s efficacy rate was 95 percent. Interestingly, the efficacy was nearly as high for adults over the age of 65 as it was for younger people. The companies will be applying with U.S. regulators for “Emergency Use Authorization”, paving the way for some of the first millions of inoculations by the end of this year.

Moderna, whose vaccine uses similar technology, provided a positive interim update, indicating its vaccine is nearly 95 percent effective as well. It will likely conclude its Phase 3 trial in the coming weeks and file with regulators with the hopes of having 20 million doses available for emergency use by year-end.

Lastly, Oxford University, in partnership with pharmaceutical company AstraZeneca, indicated that its candidate is showing promising results in its trial, in younger and older populations. Its vaccine is based off a more traditional approach to vaccine development, using a weakened version of a common cold virus found in chimpanzees.

The developments above increase the odds of having multiple vaccines available for use across the developed world as early as the spring. As a result, we have increasing confidence that a more sustainable recovery in the global economy and corporate earnings may be in store for the second half of next year and beyond.

Interestingly, despite the global pandemic, earnings this year have been more resilient than expected. Profits have indeed fallen given the shutdown of the global economy and the many restrictions that are in place across parts of the world. Companies in the S&P 500 for example, are projected to see their aggregate earnings decline by almost 16 percent in 2020. Yet, that decline is better than the average decline of 18 percent seen in the 11 recessions experienced in the U.S. dating back to 1948.

There are many companies and entire industries that are struggling with significant declines in their business results, such as the travel and leisure industries, and some retail and restaurant businesses. However, there are others that have seen the opposite and are benefitting from the unusual environment, including many businesses in the ecommerce, home improvement, and telecommunications industries. The record amounts of aid supplied by governments around the world have offered meaningful support to consumers, households, and small businesses, but not all companies and industries have proved to be as sturdy, and government support has likely inflated the level of profitability to some extent.

Nevertheless, we believe that the better than expected earnings trends this year in the face of a global pandemic serve a reminder that there is an inherent resilience across economies and businesses that can often be underappreciated. That is an important lesson to take away for the next crisis we may be faced with at some point in our lives.

In this video, RBC Global Asset Management’s Chief Economist Eric Lascelles shares an update on the latest virus numbers and related economic developments. He explores how Europe and the U.S. are managing with the second wave, while highlighting the positive progress around a second vaccine candidate from Moderna - also with an efficacy rate above 90%. 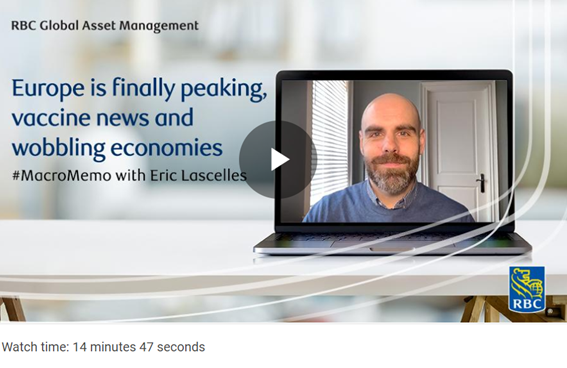 A fond farewell to the $25 bill

Did you know that Canada has a $25 bill? Just as we said a fond farewell to the penny and the $1 and $2 bill, we now bid adieu to the rare $25 bill. Not to worry if you have one of the 1,840 still in circulation, you are still able to take it to the bank and exchange it for face value… but these rare bills can worth a lot more than that!

Read more about the $25 note and a few other fun facts in this Maclean’s online article: A fond farewell to Canada’s little known $25 bill.

Thank you to everyone who took the time to vote for us in the Guelph Mercury Reader’s Choice Awards. We are excited to share that our very own Karie Huisman was awarded the top spot in the Investment Advisor category, and that the Elinesky Schuett Private Wealth Management team took home the Platinum award in both the Investment Company and Financial Planning Services categories.

In our economic update this week, we focus our discussion on the Canadian stock market (which has been one of the best performing year-to-date). In addition to our economic commentary, we’ve included three other links with economic and global insights:...