Global markets were relatively flat over the past week, but beneath the surface, the investor unease that emerged a few weeks ago remains in place. It’s hard to pinpoint why that is, and it may be a simple case of a much needed pause after a rather rapid and robust market recovery. We provide our thoughts on the current state of the economy, along with a coronavirus update below.

It’s hard to ignore the fact that the number of new virus cases is rising across an increasing number of regions once again. While the market may not necessarily care as infection rates seem to be driven by younger people and death rates globally remain relatively low, we believe this trend could have consequences for the trajectory of the global economy. We discuss this more below, but first take a look at virus developments.

In Canada, the trend is on the rise with a seven-day moving average of new daily cases of nearly 800. We use a seven-day moving average because it does a reasonable job of smoothing out any lumpiness and can help illustrate a clear trend. The good news is that the Maritimes have shown no meaningful pickup in new cases, and the same can be said for the northern territories. Meanwhile, Manitoba and Alberta, which had shown an acceleration a few weeks ago, have seen some stability. Saskatchewan has seen the opposite as its new case numbers have accelerated of late, but remain low in absolute terms. That leaves the remaining three provinces of British Columbia, Quebec, and Ontario as the three that account for nearly 80 percent of Canada’s new daily cases. The latter two are seeing the sharpest change in trend, with growth rates that are clearly accelerating. It has left government officials with the unenviable task of having to reconsider containment measures. This has already led to more restrictive policies around social gatherings and we expect more may be needed in the not too distant future.

The trends are similar in Europe, but the gravity of the situation is arguably higher. Spain, France, and the Czech Republic are three countries experiencing new highs for daily infections in the region. The United Kingdom is also witnessing a growth rate that is worrisome. As a result, more action to contain the spread across the region appears to be unavoidable at this point.

Other regions – India, Indonesia, the Middle East, and Argentina – continue to grapple with elevated caseloads. Even the U.S., which had been enjoying a slow but steady decline in new cases recently, saw a halt to that trend over the past week, though it’s too early to draw any conclusions at this point.

With much of the global economy shut down earlier this year, the easy part of the economic recovery was expected to unfold once lockdowns were lifted. That recovery is largely what happened in recent months as mobility increased, some businesses reopened, and a fair number of workers returned to their jobs. Global data over the past month has suggested that while momentum has moderated, the economy remains very much in recovery mode. Over the past few weeks, the Bank of Canada, European Central Bank, and U.S. Federal Reserve all acknowledged as much, with some even suggesting a return to pre-COVID levels of economic production by the end of 2021, rather than earlier projections of 2022.

Nevertheless, the path going forward may prove to be a bit more difficult than it has been in recent months. Many of the government programs set in motion at the beginning of this crisis are on the verge of change. Canada’s programs are expiring and transitioning to new forms of relief at the end of the month. Europe, which saw only modest increases in unemployment this year because of the region’s furlough schemes, is set to see some of them wind down. Meanwhile, the U.S. has already seen some of its programs expire, with more concluding at the end of this month. Despite the need for more support, U.S. government officials can’t seem to agree on the extent of aid that is required.

The biggest risk facing the global economy still lies with the virus itself. We expect very few governments have an appetite to once again revisit full scale lockdowns, but we expect many will consider some combination of smaller measures to slow the spread. Indeed, we have seen this approach employed already across some U.S. states in recent months, and more recently across Europe. These actions won’t result in the colossal economic hit that was suffered earlier this year, but they will inevitably have some impact, leaving us with the impression that economic activity may have more potential to ebb and flow in the months to come rather than simply trend higher.

We have not been surprised by the economic recovery to date, though the global market rebound has admittedly been stronger and faster than we would have expected. The recent market weakness may simply be a typical pause and period of consolidation, but it may also mark a transition period where investors adjust their expectations to reflect a more uneven growth trajectory ahead.

COVID-19 and other natural disasters

In his latest #MacroMemo, Eric Lascelles, chief economist with RBC Global Asset Management, shares this thoughts on the economic recovery. He notes that the recovery continues as the world develops a degree of facility at operating amidst the pandemic. A return to our prior peak may be a couple of years away, however. 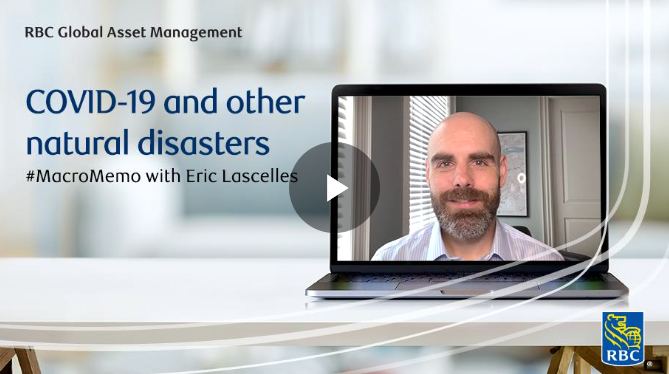 The importance of resilient companies in portfolio construction

The global pandemic has challenged management teams in unprecedented ways. The sudden, forced retrenchment of economic activity has impacted companies differently— the ones that were resilient to these unexpected changes have seen their stocks outperform those of companies that were less able to successfully react to these changes. This discussion will study the characteristics of resilient companies and examine the importance of selecting these types of companies for investment portfolios.

Read the full article online: Why resilient companies are key for portfolio construction.

Each week, we like to end our blogs with a few good news stories from in and around the community. We hope that they brighten your day!