But a demarcation point seemed to arrive in early May. After all the angst about the impending, inevitable rise in inflation that would be upon us as we lapped the pandemic trough, the April US CPI data were finally released. They showed core inflation of 3% versus last year. On one hand, that’s the highest level in 25 years; but on the other hand, it is not exactly an alarmingly high stand-alone number, especially given the circumstances. In the weeks that have followed, the fireworks mentioned above have been doused as prices have stabilized or begun to mean-revert, and as equity market volatility has been cut in half. It is all very refreshing – just like with daily life at the moment, a semblance of returning to normalcy feels good.

That being said, in last month’s update we qualitatively described the stock market as feeling happy-but-fatigued. Reasons for that fatigue have now become a bit more quantitative. Recent economic data suggest that momentum has topped-out across several measures, most notably in retail sales, job creation and manufacturing. That creates an important change to the backdrop for financial markets.

Momentum peaking doesn’t mean an end to growth. Even if you accelerate a car more slowly, the fact you are accelerating by definition means the speed is still going up. However, we do appear to have arrived at the moment in which an economic handoff must occur, shifting from a booming recovery to merely strong growth. Investor comfort with this handoff looks set to be the dominant theme in financial markets for the balance of 2021. If true, the trajectory for equities should still be “up and to the right”, but history suggests that the path over the next quarter or two will be a bit bumpy.

This ought to manifest mostly in earnings. We’ve been suggesting for several months that stock market valuation levels are in fact not so high, but rather that earnings estimates are too low. This has proven to be correct, as is pretty clearly evidenced in the chart below – note how 2021 earnings estimates have risen since January (black line), and especially in the past few weeks: 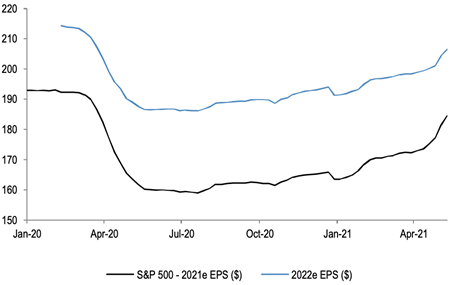 But just as recent data have shown that economic momentum is decelerating, so too is the momentum of earnings growth about to slow. To be sure, growth should remain quite positive, just with a gentler upward slope. As it happens, deceleration of earnings growth in the early part of an economic cycle has historically been great predictor of moderately negative, short-term equity market returns (chart below). Equally important, in all of those instances stock market returns after 24-months were nevertheless up double-digits – so again, the idea here is not to broadly sell equities now, but simply to expect some near-term choppiness as the boomy pace of growth decelerates.

Source: RBC US Equity Strategy, FactSet, Thomson
Looking into June, a couple of near-term events could be candidates for triggering that choppiness: monthly inflation data on June 10, and more importantly the Fed meeting on June 16. In the latter, Jerome Powell will need to thread the needle with investors on the Fed “beginning to think about” reducing bond purchases, while remaining exceedingly patient with low interest rates. As summer winds on, a future flashpoint could be the impact of vaccine holdouts on herd immunity and the resulting risk of a late autumn “fourth wave”. The very strong economic backdrop should ultimately power equity markets through these concerns, but not without bumps. Investors typically favour reasonably priced, structurally growing companies in such moments (ex. Big Tech), so the modest rebound of Growth versus Value stocks that we’ve seen since mid-May seems like a very natural response.