...fun financial narratives such as Reddit stocks, rising rates, and the implosion of a highly leveraged fund. But all have proven to be sideshows to the main event that is the economic recovery. As a result, these other factors have ultimately proven unable to derail a smart start to the year for equity markets. Government bonds may have suffered their worst quarterly return in decades, but equity markets are up mid-single digits across the board in developed countries so far this year.

Given the pace of stock market gains over the last year – combined with the fact that the pandemic is not actually over yet – perhaps the jittery tone among investors at the moment isn’t so surprising. Articles about asset bubbles are easy to find in the financial media, widely followed sages / old-timers like Jeremy Grantham are predicting a crash, and we have anecdotally noticed more skittishness than usual in our conversations with many of you this month.

If actions speak louder than words, though, then the all-important US consumer is in the absolute opposite frame of mind at the moment. As the chart below shows, US consumer credit card spending resumed its march higher in late February as vaccination rates took hold, further spiking in recent weeks as a round of stimulus cheques was received. Consumer card spending is now effectively back to pre-COVID levels (orange line), despite the fact that restaurant, travel and leisure spending are still ~40% lower on average. It is not a stretch at all to envision double-digit consumer spending growth relative to pre-pandemic levels over the coming 12 months. 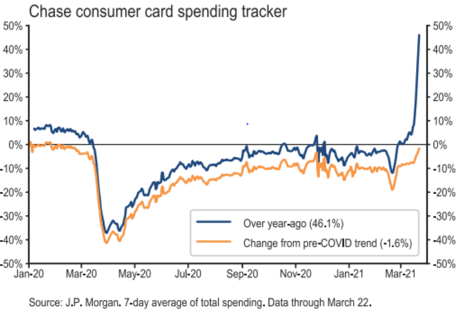 As we’ve explored in past updates, the foundation for this strong consumer spending has been a historically high savings rate during the pandemic. Savings rates have a cumulative effect, so with a year having now passed since the pandemic began it is easy to see just how impactful the stimulus measures together with limited options for spending have been: 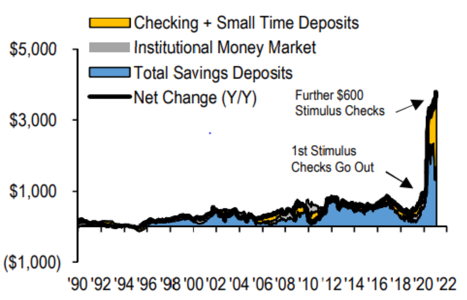 In the world’s largest economy where consumer spending accounts for 70% of GDP, this is a big deal. This past week it triggered RBC’s Capital Markets group to increase our forecast for US real GDP growth to a whopping +8% in 2021…and that is based on consumers simply returning to past patterns without any meaningful “revenge spending” that draws down on savings as the economy reopens. Add to this the multi-trillion dollar infrastructure bill introduced by the White House last week, most of which is targeted for 2022-2024 when other stimulus measures will have rolled off, and it paints a picture of robust, multi-year GDP growth.

For an investor, the mental scars of last year’s market crash are still fresh. Feeling cautious is a natural response. But it is important not to overthink things here: the demand side of the economy is remarkably strong and equity markets perform well during economic expansions. Yes, interest rates have risen and will continue to do so; but as shown last month, the bulk of that move is likely behind us, plus there is in fact a modestly positive correlation between rising rates and rising stock markets. The other major source of concern is a delayed reopening as infections from variants rise. Yet here too the data actually provide significant hope, given that countries with high vaccination rates such as the US, the UK and Israel are unique globally in not seeing a noticeable increase in cases (usual caveat: I’m not an epidemiologist).

Of course, that leaves the question of market valuation, and here we are at an interesting moment. Wall Street consensus estimates now project S&P 500 earnings of about $180 over the next twelve months. That’s about where projections were just prior to the pandemic, and it results in a forward P/E ratio of 22x. But what if earnings growth is – say – 10% ahead of expectations? Keep in mind that those RBC growth estimates mentioned above are among the more aggressive ones around, and even they do not contemplate a large release of pent-up savings. Also keep in mind that a 10% under/overshoot relatively to estimates is a one standard deviation event (i.e. pretty darned common). If we were to find ourselves at the end of this year with a 10% earnings overshoot and investors looking to the following year’s estimates for valuation as per usual, the market multiple will be around 18x forward P/E. That would be inline the long-term average, despite an aggressively booming economy. The point isn’t that current valuations are cheap, but rather that aren’t unreasonable and they certainly are not bubble-ish.

As it turns out, we have a near-term catalyst on the horizon that could start redirecting focus to this underlying strength: Q1 earnings season, which begins later this month. As usual, US banks will be among the earliest to report, and for them the higher interest rate environment together with perhaps an upcoming release of credit reserves should lead to a very strong earnings outlook. Forward guidance from companies in other sectors will reflect the knock-on effects of the recent spike in consumer spending, together other recent data showing strong business spending and confidence measures. Mega-cap tech companies in particular look well positioned to resume their earnings leadership as the “winners keep winning” dynamic continues to play out during the economic recovery. If earnings growth is going to be the catalyst for further equity market gains, the narrative should begin to pick up steam later this month. Overall then, while it certainly seems like an appropriate time to be exercising discipline with investments (and really, when isn’t it?), any jitters about the equity markets at the moment seem arguably misplaced.