We’re 0 for 2 so far this year. Despite what appears to be an unprecedentedly solid backdrop for economic recovery, strong equity returns in the first ...

...two months of this year have clutched defeat from the jaws of victory in their dying days. For January, the culprit was a spike in equity market volatility which was catalyzed – oddly – by bullish mobs on Reddit. This month, the source was a spike in interest rate volatility.

It is fascinating that in both cases the trigger for stocks to sell-off has been optimism about growth. For example, according to mainstream media, the yield on 10-year US Treasury bonds shot above 1.5% last week on fears that a very strong economic reopening will cause inflation to surge. Rising interest rates are in theory a negative for the value of long-dated assets like growth equities (Microsoft, Amazon, Tesla, etc.) because of the time value of money, hence the equity market sell off.

This media narrative is partially correct: year-over-year inflation will surge starting this month as we lap last year’s pandemic affected numbers. Meanwhile, it has become increasingly obvious that pent-up consumer savings are likely to make this summer’s economic reopening in the US absolutely spectacular: 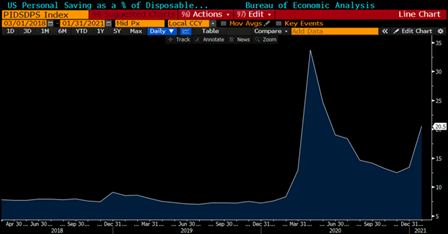 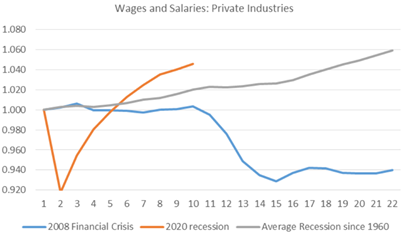 As you can see, the impact of January’s stimulus cheques on an already very high US consumer savings rate is clear, and recall that savings rates are cumulative. The second chart shows that a healthy consumer is not just a function of government largesse – underlying employment and wage conditions are meaningfully stronger than a typical post-recession period, and far better than after Financial Crisis. This will be a very different recovery than what was experienced last decade, and it will be the first recession in memory from which we emerge with consumers that are cashed-up and eager to spend.

The rest of last week’s narrative on rising interest rates is false, however. Interest rates have not risen in anticipation of inflation. They have instead increased on the belief that this summer’s economic recovery could prove so powerful that the Federal Reserve will have no choice but to raise rates sooner than planned. This is an important difference: what changed last week wasn’t a belief that central banks will “fall behind the curve”, but rather that strong economic growth is going to be even stronger than previously thought. This explains the past week’s spike in nominal interest rates being mirrored by real rates: 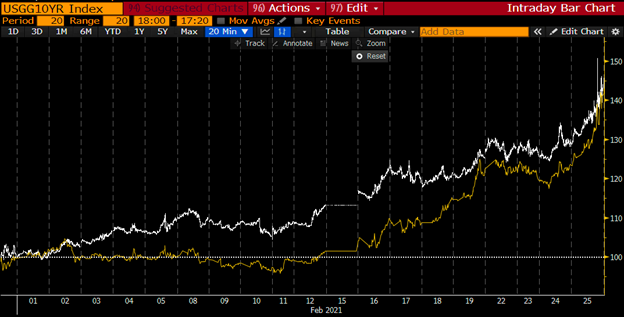 This also explains why inflation havens like gold declined during the past week – the deemed value of their inflation protection was reduced. What it doesn’t explain is the general sell off in equity markets. Contrary to popular belief, periods with steadily rising interest rates due to a booming economy have historically been wonderful times during which to own equities. Look no further than stock market returns in 2017 and 2018: the S&P 500 gained 22% during the former, and a further 10% during the latter before being derailed by a somewhat tone-deaf Fed statement about elements of monetary policy being “on auto-pilot”.

Instead, for the second month in a row responsibility for equity market weakness seems to be the risk controls of quantitative trading models, which as discussed last month are often of the “shoot first, ask questions later” variety. It is interesting to observe that a hallmark of investing in the 2020’s appears to be sharper market volatility when cozy correlations break down. Not that I’m complaining – more chances to separate signal from noise equates to more opportunity. In this case, the volatility seems to very clearly be noise: the past two years’ correlation between declining interest rates and rising stock markets broke down in February, but as mentioned above, rising interest rate environments actually have a happy history with equities. Let the models adjust thrash about as they adjust to rates going up – here in the real world, the economy is raring to go. On that note, Q4 earnings season has almost concluded, and excluding the energy sector S&P 500 companies remarkably grew their earnings by 6% over the prior, pre-pandemic year.

One final question worth asking about current interest rate volatility is how far it might go. An interesting aspect of today’s ultra-low, short-term rate environment is that a jump in longer-term rates implies even larger increases in the medium term. For example, using a bit of bond math, we can decompose a 10-year Treasury bond in two 5-year bonds: one that we buy at today’s low rates, and the second that we buy 5 years from now at some higher rate. As of Thursday, that implied higher rate was about 2.25%, having risen from about 1% at the end of summer. 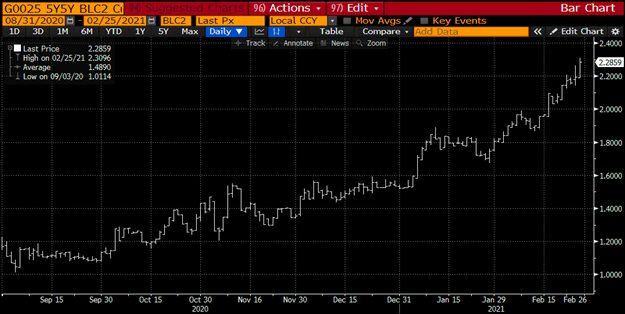 For context, the yield on 5-year Treasury bonds peaked out around 3% in 2018 before the Fed started its most recent cycle of rate cuts. If we were to repeat that experience – which is obviously too simplistic of an assumption, but not bad for quick context – it would imply that the next interest rate cycle is already about 2/3rds priced in. Said differently, we’re running out of interest rate related bad news…and the news actually isn’t even bad in the first place. Equity markets may have whiffed on a couple of recent pitches, but odds remain solidly in favour of the slugger connecting with the ball again soon.